In yet another daring rescue, the IAF pulled out four men stranded in the middle of a swirling Tawi river in Jammu district on Monday. 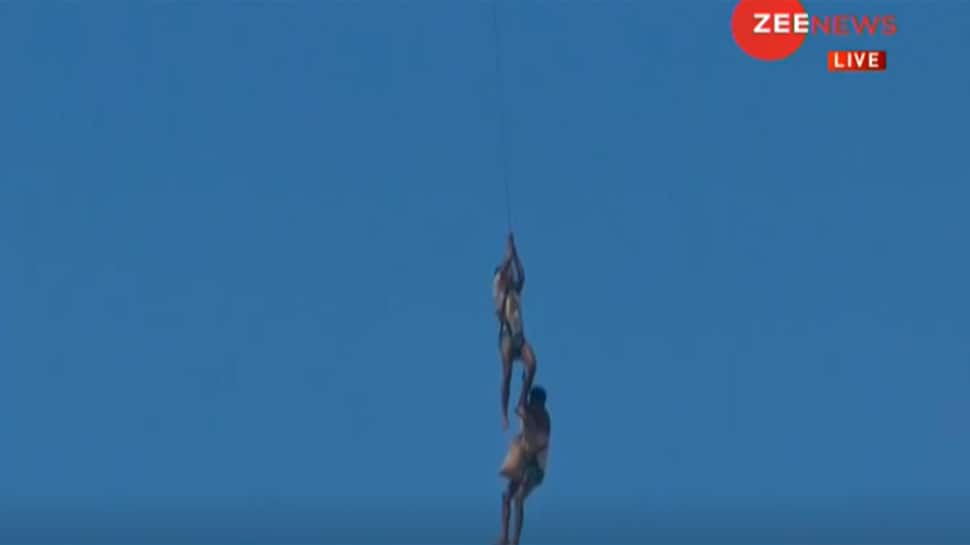 Jammu: It was another regular day for the valorous Indian Air Force (IAF) personnel who want about saving people's lives in the flood-hit regions of the country with clinical precision and brilliant co-ordination. Risking their lives to save fellow citizens, the IAF officers, commandos and airmen proved that no danger is too huge a challenge for them.

In yet another daring rescue, the IAF pulled out four men stranded in the middle of a swirling Tawi river in Jammu district on Monday. The four people were stuck at an under-construction dam on Tawi river after the river's water level suddenly rose. Appearing as an answer to their prayers, a team of IAF commandos aboard a helicopter arrived at the scene.

In a rescue operation which was successfully concluded within an hour, an IAF officer descended from a Mi-17 helicopter on a concrete surface of the dam where two people, believed to be fishermen, were stranded. The officer, who was a Garud commando slid down a harness rope with feline grace and rushed towards the helpless fishermen carrying harness.

The commando attached the harness belts swiftly to the fishermen before they were dangled in the air to be airlifted by the mid-air chopper on top of the raging river. Strong winds made the rescue effort extremely challenging, but the highly-trained commandos, pilots and other soldiers ensured the helicopter and harness' stability, so that the fishermen could make their way to safety.

Little known anecdote of this smooth-appearing operation was that the soldiers had to change their strategy while hovering in the air. They had earlier planned to use ladder ropes to execute the mission. However, they changed their approach in the middle as the ladder rope snapped. Seeing the fishermen unable to climb up the ladder, the brave commando did not hesitate for a second to come down to save his fellow countrymen.

Thumping with pride and exhilaration, an IAF spokesperson said, "It was a very, very daredevil rescue by both the team. A very good coordination by the Garud commandos and helicopters."

The IAF also released a goosebump-inducing video of the rescue mission.