An IAF pilot in a Su-30 MKI seems to be balancing another fighter jet on his fingertip while the two aircraft fly across the French airspace above the Mont-de-Marsan Air Base. 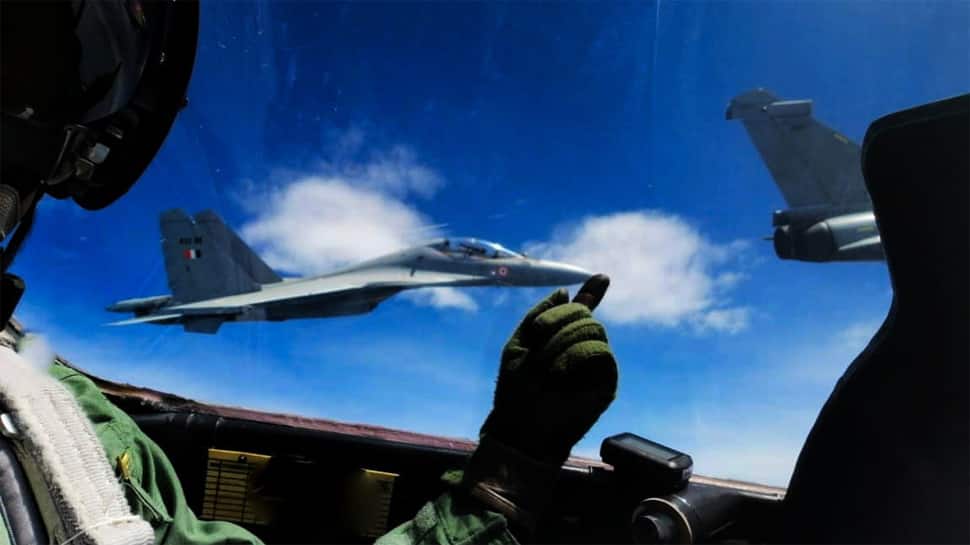 Indian Air Force fighter pilots are not only lethal when they are flying their powerful jets, but they also know how to capture the beautiful and funny moments they come across while on duty. During the ongoing Garuda VI exercise in France, the pilots of the Indian Air Force and Armée de l'Air have shared some really captivating photographs while flying their Sukhoi Su-30 MKI and Rafale fighters.

In yet another such beautiful photo, an IAF pilot in a Su-30 MKI seems to be balancing another fighter jet on his fingertip while the two aircraft fly across the French airspace above the Mont-de-Marsan Air Base. The photo posted on IAF's social media accounts shows two Su-30 MKIs flying side by side while the tail portion of a French Air Force Rafale jet is also visible. The IAF also asked social media users to captain the picture.

The Garuda VI air exercise is being held at France's Mont-de-Marsan Air Base from July 1 to 14. The air forces of the two nations have shared several interesting photos from the exercise in the last few days.

Indian and French pilots flew each other fighters too and took selfies in them. While the IAF pilots got a feeling of the Rafale jet, an aircraft that will soon be part of India's arsenal, the French also took to the skies in Su-30 MKIs.

On the IAF pilots who flew in a Rafale is Squadron Leader Sourabh Ambure while an unnamed Armée de l'Air pilot was in the Su-30 MKI during the integration flying training week. The IAF has stated that Garuda VI exercise will help the air forces of the two countries in imbibing good practices while helping in enhancing interoperability and cooperation between them.

Only have party's best interest in mind: Urmila Matondkar on letter which exposed Congress' flaws