Each jet was given a special water cannon salute at the strategically-located airbase in the presence of top brass of the Indian Air Force including Chief of Air Staff Air Chief Marshal Bhadauria, who had played a key role as lead negotiator in the procurement of the jets. 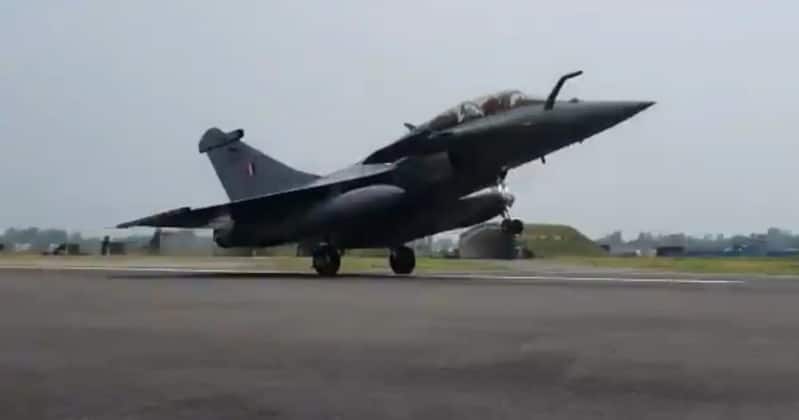 New Delhi: The arrival of the first batch of five Rafale jets on Wednesday (July 29) has given India's air power a strategic edge amid a bitter border row with China in eastern Ladakh and frayed ties with Pakistan. The combat aircraft landed at the Ambala Air Force base at around 3:10 PM to a rousing reception, nearly four years after India inked an inter-governmental agreement with France to procure 36 Rafales.

Prime Minister Narendra Modi welcomed the arrival of Rafale jets, and tweeted in Sanskrit, saying there is no virtue like protecting the nation and there is no vow like defence of the nation.

As soon as the aircraft touched down the airbase, Defence Minister Rajnath Singh tweeted "The Birds have landed safely in Ambala." Giving a veiled warning to China, he said "I would like to add, if it is anyone who should be worried about or critical about this new capability of the Indian Air Force, it should be those who want to threaten our territorial integrity."

Each jet was given a special water cannon salute at the strategically-located airbase in the presence of top brass of the Indian Air Force including Chief of Air Staff Air Chief Marshal Bhadauria, who had played a key role as lead negotiator in the procurement of the jets.

The fleet, which took off from Merignac airbase in French port city of Bordeaux on Monday morning, had a planned stopover at Al Dhafra airbase in the UAE and began its onward journey Wednesday morning. The Rafale jets established contact with Indian Navy warship INS Kolkata in the Western Arabian Sea and were escorted by two Sukhoi 30 MKIs after they entered the Indian air space.

According to an Indian Air Force statement, "The aircraft covered a distance of nearly 8,500 km from France to India. First stage of the flight covered a distance of 5,800 km in seven and a half hours. French Air Force tanker provided dedicated air-to-air refuelling support during the flight. The second stage of the flight covering over 2700 km was carried out with air-to-air refuelling by IAF tanker."

Known for air-superiority and precision strikes, the Rafale jets are India's first major acquisition of fighter planes in 23 years after the Sukhoi jets were imported from Russia in 1997.

The fleet, comprising three single-seater and two twin-seater aircraft, is being inducted into the IAF as part of its Ambala-based No 17 Squadron, also known as the 'Golden Arrows'. The 'Golden Arrows' was resurrected on September 10 last year. It was originally raised on Oct 1, 1951.

The Ambala base is considered one of the most strategically located bases of the IAF as the Indo-Pak border is around 220 km from it. Out of 36 Rafale jets, 30 will be fighter jets and six will be trainers. The trainer jets will be twin-seater and they will have almost all the features of the fighter jets.

The aircraft is capable of carrying a range of potent weapons. European missile maker MBDA's Meteor beyond visual range air-to-air missile, Scalp cruise missile and MICA weapons system will be the mainstay of the weapons package of the Rafale jets. The IAF is also procuring new generation medium-range modular air-to-ground weapon system Hammer to integrate with the Rafale jets.

Meteor is the next generation of BVR air-to-air missile (BVRAAM) designed to revolutionise air-to-air combat. The weapon has been developed by MBDA to combat common threats facing the UK, Germany, Italy, France, Spain and Sweden. The Meteor is powered by a unique rocket-ramjet motor that gives it far more engine power for much longer than any other missile, said an official.

A look at how Rafale fighters will be a gamechanger against Pakistan and China:

Rafale vs China’s Chengdu J-20: While China’s Chengdu J-20 jets are called fifth-generation combat jets, compared to 4.5 generation Rafale, the J-20 have no actual combat experience. The Rafale has been used by the French Air Force for its missions in Afghanistan, Libya and Mali. Rafale can also carry more fuel and weapons than the J-20. It is capable of carrying out at least four missions in one sortie while the J-20 cannot carry out multiple missions in one go.

Rafale vs Pakistan’s F16: 190-kg Meteor missile has a Beyond Visual Range (BVR) of over 100 km, travelling at a top speed of Mach 4. The F-16 jets, used by Pakistan, carry the AMRAAM missile, which has a BVR of 75 km. Rafale can also outperform F16 in dogfights. PAF will have to deploy two F16s to counter one Rafale.

The Indian Air Force could deploy the first batch of Rafale fighter jets in the Ladakh sector, amid ongoing border tensions along the Line of Actual Control (LAC). The combat aircraft will bring following changes in the IAF:

1. More Advanced Technology: The Rafales are armed with 'Meteor' air-to-air missiles (120-150 km strike range), 'Scalp' air-to-ground cruise missiles (over 300 km) and other armaments. The Meteor missiles are arguably the best in the world for air combat duels, with “a greater no-escape zone” for hostile fighters than any comparable BVR (beyond visual range) weapon. Pakistan and China do not currently have any missiles of this class in their combat inventories.

2. Combat Proven: With more than 30,000 flight hours in operations, it has proven its worth in combat in Afghanistan, Libya, Mali, Iraq and Syria. On the other hand, Pakistan JF-17 and Chengdu J-20 are yet to be tested in battles or war-like situations.

3. IAF's lack of long-range weapons over: For almost two decades, the IAF has been perceived to be handicapped on long-range weapons and sensors vis-a-vis PAF. Rafale will reverse this and give IAF the decisive edge with better sensors and weapons. Each Rafale in the air would require at least two F16s for a counter-challenge.

4. Edge over rivals: The Rafale fighters will be able to outgun and outrun Pakistani F-16 and JF-17 as well as the Chinese Chengdu J-20 fighters. According to sources, the air-to-air and the air-to-ground strike capabilities of Rafales cannot be matched by either China or Pakistan and the aircraft would give India an edge over both the rivals.

5. Air superiority: The state-of-the-art 4.5 Generation Rafale jet can reach almost double the speed of sound, with a top speed of 1.8 Mach. With its multi-role capabilities, including electronic warfare, air defence, ground support and in-depth strikes, the Rafale lends air superiority to the Indian Air Force.

6. Enhance offensive capabilities of IAF: The jet is capable of carrying out a variety of missions--ground and sea attack, air defence and air superiority, reconnaissance and nuclear strike deterrence. The Rafale will be the seventh addition to the types of fighters that the IAF has--a feat very unique to the force in comparison to major air forces in the world.

7. Can shoot down enemy targets without crossing border: Rafale jet will be able to shoot down an enemy aircraft, even if over 100 km away, without even crossing the Indian air space.

8. Omnirole (ability to perform multiple mission types simultaneously): The jet is capable of performing several actions at the same time, such as firing air-to-air missiles during a very low altitude penetration phase, giving it outstanding survivability.

9. Can avoid being tracked by Pakistan: The multi-role combat aircraft, reportedly, has a range of between 780-1055 km compared to the 400-550 km of the Su 30 MKI. This means that India will now be able to engage Pakistani aircraft from larger distances, without the risk of being tracked.

13. Will make IAF stronger: The aircraft has very good flying performance and its weapons, radar and other sensors and Electronic Warfare capabilities are amongst the best in the world.

Globally known as one of the most potent strategic platforms with unmatched capability in carrying out a variety of roles, Rafale jets will significantly bolster India's air combat capabilities. It has proven its worth in combat in Afghanistan, Libya, Mali, Iraq and Syria with more than 30,000 flight hours in operations.

1. Supported ISAF Operations in Afghanistan (2006-11): French Air Force and Navy Rafale fighters were engaged in countless combat missions in Afghanistan where they demonstrated a very high proficiency and a tangible military value. The AASM/HAMMER precision-guided modular air-to-surface armament, PAVEWAY laser-guided bombs, and the 30 mm cannon were employed on many occasions, scoring direct hits with remarkable precision.

2. Destroyed air defence in Libya (2011): French Air Force and French Navy Rafale fighters were the first to operate over Benghazi and Tripoli, and carried out the whole spectrum of missions including air-superiority, precision strikes with HAMMERS and laser-guided bombs, deep strike with SCALP cruise missiles, Intelligence, Surveillance, Tactical Acquisition and Reconnaissance (ISTAR) and Strike Coordination And Reconnaissance (SCAR).

During the Libyan conflict, hundreds of targets – tanks, armored vehicles, artillery emplacements, storage dumps, command centres and air-defence systems (SA-3 Goa and SA-8 Gecko fixed and mobile SAM launchers) – were hit with devastating accuracy by Rafale aircrews. Interestingly, Gaddafi had expressed interest in purchasing a number of them in 2007.

Four Rafales undertook the longest raid in French Air Force history, taking off from Saint-Dizier, in eastern France, and landing in N’Djamena, in Chad, after hitting 21 targets and spending no less than 9 h 35 min airborne. The French Air Force quickly set up a forward operating base in Chad, and the Rafale detachment later grew to eight aircraft.

4. Attacked Islamic state targets in Iraq (2014): Rafales were called in for operations in the fight against the Islamic State militants in Iraq as part of Operation Chammal. In the first few weeks of their deployment, the Rafales' task was to identify targets for the US fighter planes undertaking airstrikes against the Islamic State. Rafales joined American operations in conducting airstrikes. France conducted its first airstrike on September 19 against Islamic State targets in Iraq.

5. Destroyed Islamic state installations in Syria (2015): As part of Operation Chammal, Rafales operated in Syria and hit targets in early October 2015. The November 13, 2015 terror attack in Paris further intensified French air offence against the Islamic State in Libya. Rafales, as part of a fleet of fighters, struck training camps and ammunition facilities in Raqqa, Syria.

Other key highlights of Rafale are:

-With deep air support
-Reach and combat radius is 1600-1700 Kms
-Capable for Long Range standoff Mission
-It can carry best air to air missile
-Equipped with Air-to-Ground Missile System
-It will get French industrial support for 50 years.
-It can also carry the best long-range air-to-land missile
-Fully capable to fulfill the urgent operational requirement of the Indian Air Force
-Specifically designed to take off from extremely cold high altitude region
-It gives the ability to engage enemy fighters from distance without being trapped
-It will also be fitted with the air-to-air beyond visual range interception combat and self-defence missile
-It has a multi-directional radar system which can detect 40 targets at the same time in a range of over 100 Km
-It has advance radar warning receiver to identify hostile tracking system a towed decoy system to thwart incoming missile attacks
-Rafale will ensure that our pilots will not have to cross the border to strike the target, that is about 600 Km in enemy territory

IAF's Rafale fighter jets has proven its worth in combat: Here's how