The Indian Air Force on Monday shared proof that the MiG-21 shot down Pakistani F-16 over the skies of Jammu and Kashmir on February 27, 2019.

The Indian Air Force on Monday nailed Pakistan's lies by asserting that it has credible information and evidence that the Pakistan Air Force lost one F-16 in the dogfight with Wing Commander Abhinandan Varthaman's MiG-21 Bison on February 27, 2019. Addressing a press conference, Air Vice Marshal RGK Kapoor said that the IAF will not be sharing the all the details of the aerial battle due to the concerns of security and confidentiality but shared some proof of the MiG-21 shooting down the Pakistani F-16 over the skies of Jammu and Kashmir.

The IAF said that it has irrefutable evidence of not only the fact that the F-16 was used by Pakistan Air Force on February 27 but also that IAF MiG-21 Bison shot down the Pakistani jet. "There is no doubt that two aircraft went down in the aerial engagement on 27 February 2019 one of which was the bison of IAF while the other was F-16 of Pakistan Air Force conclusively identified by its electronic signature and radio transcripts," the IAF said.

Here is the full text of the IAF statement:

1. On the 26 Feb19 in an Intelligence led operation the IAF successfully struck the biggest training camp of JeM in Balakot. The non military preemptive action was specifically targeted at the JeM camp.
2. As a repost, PAF aircraft attempted to target military installations in India. However their attempts were thwarted by IAF aircraft. PAF bombs fell in various Indian Army Formation compounds however they were unable to cause any damage to our military installations. As a result of the interception the primary objective of PAF strike was not achieved. They were intercepted by IAF Su 30 MKI, Mirage 2000 and MiG21 Bison fighter aircraft guided by ground radars and AWACS ( Airborne Early Warning and Control System). All PAF aircraft were identified by electronic signature. as shown on the slide) The IAF aircraft were vectored to shoot down PAF aircraft.
3. PAF aircraft fired multiple AMRAAM missiles which were defeated by use of counter measures and tactical maneuvers. In the aerial combat that followed one Mig 21 Bison of the IAF piloted by Wg Cdr Abhinandan shot down one F-16 of PAF. As shown in radar image on the slide. The F-16 crashed and fell across the LOC in PO J&K. The IAF lost one MiG21 in the aerial engagement and the pilot wg cdr Abhinandan ejected safely but his parachute drifted into PO J&K where he was taken into custody by Pakistan Army.
4. The IAF has irrefutable evidence of not only the fact that F-16 was used by PAF on 27 Feb19 but also that an IAF MiG21 Bison shot down a PAF F-16. 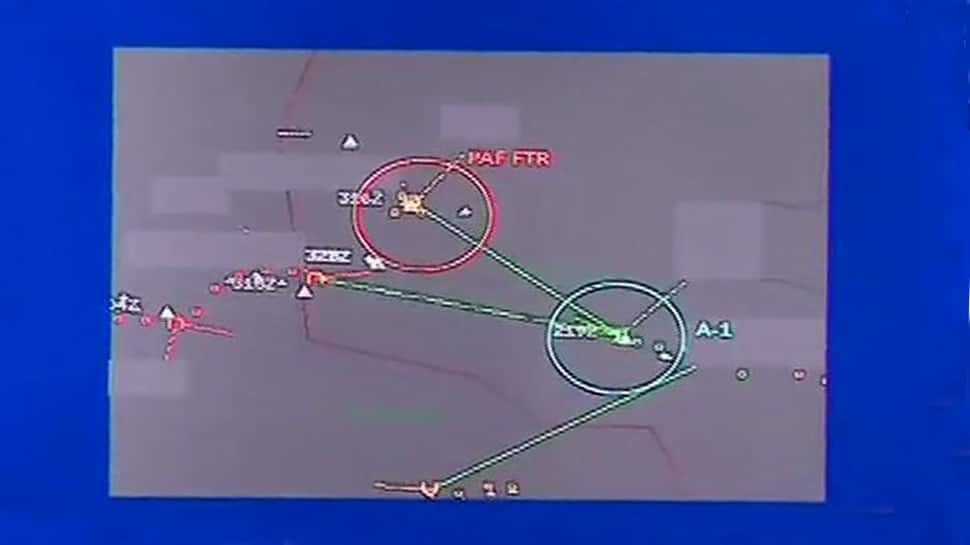 (a) The Indian Army posts in the vicinity of the LoC in the Jhangar (under Nowshera Brigade) have visually sighted two separate parachutes. The first sighting was due West, in general area Sabzkot and the second, was after a few minutes, Southwest, general area Tandar. The two areas are approximately 8-10 Bins apart as shown on the slide (the two sightings were in locations separated in time and space). The 2 parachutes were seen from places at a vantage point. (MAP SLIDE)
(b) This is corroborated by radio communications intercepts of Pakistan Army formations in the area which categorically state the capture of atleast two pilots, one them being Wg Cdr Abhinandan and a second one being admitted to CMH.
(c) Certain official statements made by the DG ISPR further corroborate the IAF stand. In his initial statement on 27 Feb19 DG ISPR categorically said '3 pilots - one in custody, and two in the area'. Subsequently, DG ISPR also stated on camera in a press conference that they had two pilots. One in custody and the other had been admitted to hospital and was being given treatment.
(d) The same was further corroborated by the statement by Pak PM on camera also indicating more than one pilot.
(e) All of these conclusively prove that a total of two aircraft had gone down that day in the same area separated by approximately 1 to 1:30 min of time.
(f) Analysis of electronic emissions have shown that the aircraft picked up by the ELINT intercepts from AWACS and radio transcripts indicated F-16s in the area directly in front of Wg Cdr Abhinandan's aircraft.

5. The IAF has achieved its objectives of a successfully striking the terrorist camp at Balakot and thwarting the PAF attack against our military installations. The PAF was unable to achieve its military objectives.

6. There is no doubt that two aircraft went down in the aerial engagement on 27Feb19 one of which was a Bison of IAF while the other was a F-16 of PAF conclusively identified by its electronic signature and radio transcripts
7. What has been stated here today is sufficient to prove the fact that PAF lost an F-16 on the 27 Feb19.
8. The IAF has more credible information and evidence that is clearly indicative of the fact that PAF has lost one F-16 in the air action on the 27 Feb19. However due to security and confidentiality concerns we are restricting the information being shared in the public domain.

Pakistani jets including F-16, JF-17 and Mirage-III fighters tried to cross the Line of Control in Jammu and Kashmir to target Indian military establishments on February 27, a day after the IAF bombed Jaish-e-Mohammad terror camps deep inside Pakistan. IAF's MiG-21 Bisons and Sukhoi Su-30MKI jets intercepted and chased away the Pakistani planes

Wing Commander Abhinandan Varthaman's MiG-21 chased a Pakistani F-16 and shot it down but his plane too was hit by a Pakistani missile and the IAF pilot had to eject over the skies of Pakistan-occupied Kashmir. He was captured after he landed in PoK, almost 7-8 kilometres from the LoC. He remained in Pakistani captivity for almost 60 hours and was released late evening on March 1, 2019.