With the IAF retiring MiG-21 variants, the Golden Arrows was number plated (decommissioned) in 2006. But now the squadron will fly the latest fighter in IAF's arsenal - the 4++ Generation French Rafale combat aircraft.

On September 10, 2019, the Rafale fighter got its new home with the Indian Air Force after Air Chief Marshal Birender Singh Dhanoa resurrected the No.17 'Golden Arrows' Squadron at Haryana's Ambala airbase. The Golden Arrows Squadron has been put on Indian Air Force's active Order of Battle following the resurrection.

"It gives me immense pleasure to handover the Squadron insignia to Commanding Officer Designate Group Captain Harkirat Singh. The Golden Arrows has been an epitome of professional excellence and dedication. The association of Number 17 Squadron with Ambala has been from its very inception when it was formed here in 1951. It has come back to Ambala," said the IAF Chief on the ocassion. He also inaugurated a Golden Arrows Squadron museum at the air base.

The 'Golden Arrows' was raised on October 1, 1951, at Ambala with the Harvard IIB trainer aircraft. The Squadron's first commnader was Flight Lieutenant DL Springett. It later got its first jet fighter de Havilland Vampire by November 1955. Later British Hawker Hunters were part of its fleet and in 1975 the Squadron converted to Russian MiG-21s. ACM Dhanoa as a Wing Commander had commanded the 'Golden Arrows' during the 1999 Kargil War and even flew several sorties to bomb the Pakistani intruders perched on the mountains as part of Operation 'Safed Sagar'.

The Squadron played an important role in Goa Liberation Campaign in December 1961 and was the reserve force during the India-Pakistan 1965 war. When India and Pakistan fought the 1971 war, the Squadron was under the command of Wing Commander N Chatrath. It took part in close air support, counter air and fighter reconnaissance missions. The Squadron was presented 'Colours'  by the then President of India R Venkataraman in November 1988.

With the IAF retiring MiG-21 variants, the Golden Arrows was number plated (decommissioned) in 2006. But now the squadron will fly the latest fighter in IAF's arsenal - the 4++ Generation French Rafale combat aircraft.

IAF will officially induct the Rafale on October 8, 2019, in the presence of Defence Minister Rajnath Singh. A government source told ANI news agency that October 8 is auspicious Dusshera and Air Force Day will be celebrated on the same day. 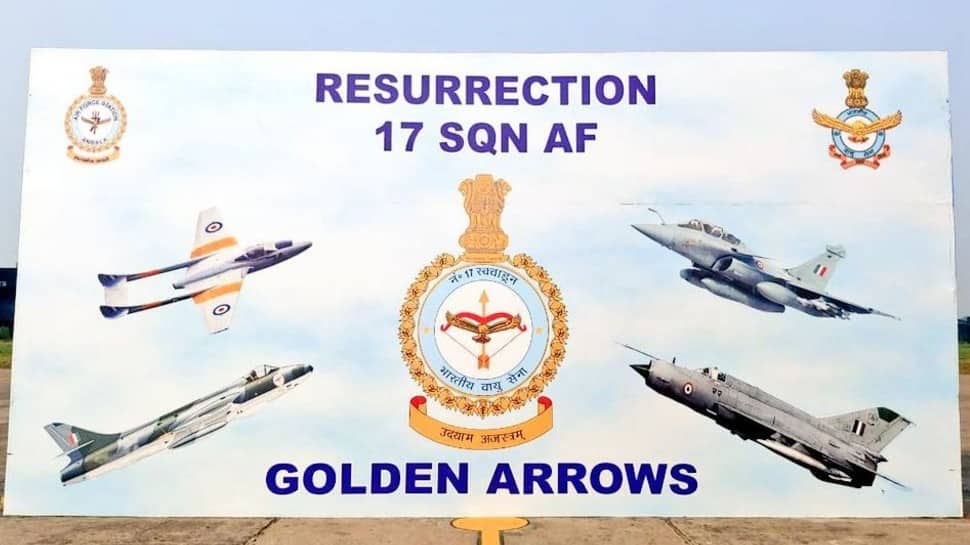 A batch of 24 IAF fighter pilots are being trained on the Rafale in batches and the first plane will land in India only in May 2020 after all the India-specific enhancements to make it more lethal have been carried out on the fighter.

While one squadron of Rafales will be based in Amala to tackle Pakistan, the second squadron of 18 jets will be at Hashimara in West Bengal to deal with China.

India signed a deal with France for 36 Rafale jets in early 2016. IAF Rafales will be armed with several state-of-art weapons including the beyond visual range (BVR) air-to-air Meteor, short and medium-range air-to-air MICA and precision-guided air-to-ground SCALP missiles.