If Indira Gandhi is praised for 1971 war, why not PM Narendra Modi for Balakot: Rajnath Singh

Singh said India has never eyed territory of any country and always believed in the concept of universal brotherhood. 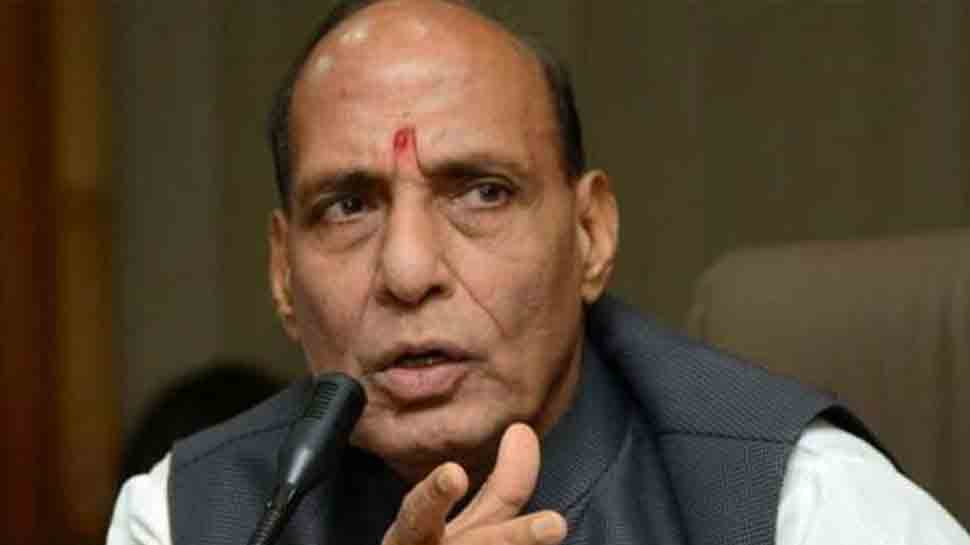 Amravati: Union Home Minister Rajnath Singh Tuesday said if then Prime Minister Indira Gandhi can be praised for splitting Pakistan into two in 1971, why can't incumbent Narendra Modi be applauded for giving a befitting reply to Islamabad for the Pulwama terror attack.

Addressing a well-attended public meeting at Nehru Maidan here, he ridiculed the Congress for questioning the air strike on a terror camp at Balakot in Pakistan and over the issue of number of terrorists killed in the operation.

The former BJP president said the February 26 air strike led to restlessness in Pakistan which is understandable, but sought to know why the same feeling prevailed in some sections in India.

"When terrorists attacked and killed our 42 soldiers in Pulwama, Prime Minister Modi immediately held a meeting and ordered the armed forces to avenge the attack within 15 days.

"The operation was executed with utmost care on the 13th day (of Pulwama attack), taking precaution that no innocent person or the Pakistan army is targeted. We targeted only the terrorist training centre and destroyed it," he said.

"If Pakistan turned restless after this attack that is natural, but why should there be restlessness in some sections in the country?" he asked.

Singh said India has never eyed territory of any country and always believed in the concept of universal brotherhood.

"We don't believe in expansion. We are not expansionists. India has never attacked any country on its own because `Vasudhaiva Kutumbakam' (the world is one family) is our culture," the home minister said.

"The `yuddhaveers' (warriors) do not count dead bodies. It is the work of the `giddhveers (vultures)'," he quipped and congratulated the armed forces for the air strike.

The Modi government handled the issue of border security with responsibility and skillfully, Singh said.

"We do not tease anybody but if somebody tries to tease us, we give a befitting reply," he asserted.

"If Indira Gandhi is praised by one and all in the country for her 1971 action of dividing Pakistan into two, why should some people in India feel restless if Modi is praised for his action of giving Pakistan a tit-for-tat reply for the Pulwama attack?" he asked.

Speaking about the BJP-Shiv Sena alliance, Singh said there was speculation that it will break, but both parties are "natural allies sent on the Earth to work together".

"For us, it is not a compulsion but a commitment. This bond of friendship is forever," the BJP leader said.

Commenting on the NDA government's performance in the last five years, Singh said under Modi's watch India has become the sixth largest economy in the world from being on the tenth spot before the BJP-led coalition came to power.

He said by 2030-31, India will be among the top three economies of the world.

Singh highlighted the NDA government's achievements in fields like housing, sanitation and social security and claimed the rate of inflation has come down to half of the GDP growth rate in last five years.

"The nation is marching ahead. The image of India is changing at the global level. The world no more looks at India as a weak nation, but a strong nation which has developed an anti-satellite missile, a capability possessed only by Russia, America and China," he said.

Singh expressed confidence about the BJP-led NDA coming to power once again after the April-May Lok Sabha elections.

"BJP will lead the government that will have ministers from allies. A three-fourth majority is possible for NDA this time too. Such is the atmosphere in the country," he said.

Singh talked about promises made in the BJP manifesto for farmers and asked them not to lose hope and keep their morale high.

He criticised Congress president Rahul Gandhi for his party's manifesto pledge of scarping the sedition law if voted to power.

If voted to power, the NDA government would make the law more stringent, the home minister said.

Singh said the Article 370, which grants special status to Jammu and Kashmir, will have to scrapped if there is a talk of two prime ministers in the country.

Singh said that the road to Delhi is believed to pass through Uttar Pradesh as it has 80 Lok Sabha constituencies.

"But I say a parallel road goes to Delhi through Maharashtra which has the highest number Lok Sabha seats (48) after UP. So, until Maharashtra strengthens, the nation cannot become strong," he remarked.

The rally was organised in support of Anandrao Adsul, the Shiv Sena candidate from the Amravati Lok Sabha constituency which goes to the polls on April 18.