The daily further said that the cartoon should not have appeared on its pages and ''it does not reflect its editorial policy.'' 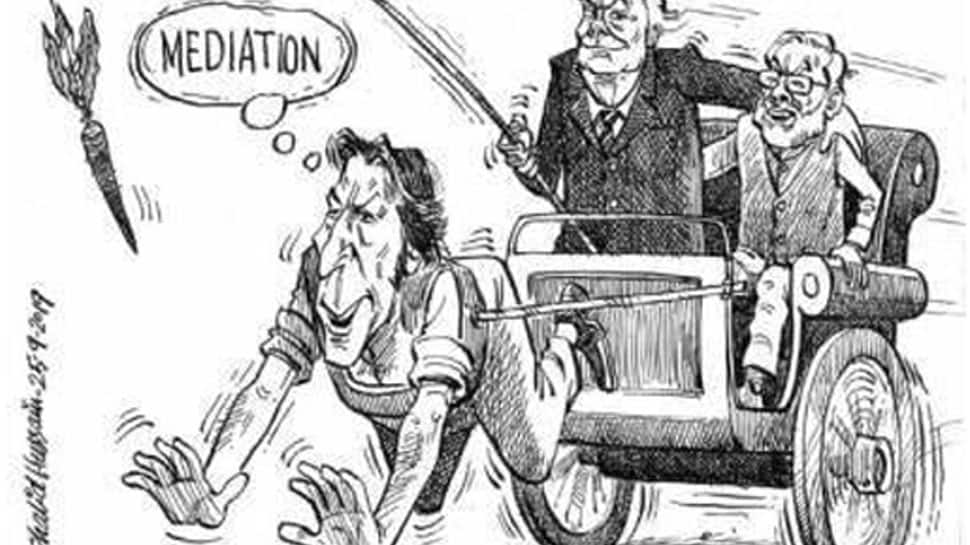 ISLAMABAD: Pakistan Prime Minister Imran Khan has become a butt of a joke in his own country as a leading daily has tendered an apology over a cartoon published by it over the former's desperate attempts for a UN mediation on Kashmir.

The controversial cartoon showed Pakistan PM Imran Khan pulling a cart carrying US President Donald Trump and Prime Minister Narendra Modi. Both Trump and PM Modi were shown laughing as they enjoyed the cart ride, while the Pakistan PM appeared to be thinking of mediation on Kashmir.

The Nation, which had published the cartoon on Wednesday, took to Twitter and said that ''they would like to apologise for the cartoon, which fell short of the artwork.''

The daily further said that the cartoon should not have appeared on its pages and ''it does not reflect its editorial policy.''

A sincere apology from us to our readers... pic.twitter.com/tQyMTswN74

''We are proud to be a nationalistic paper, and we regret sincerely the attention taken by an artwork that was inappropriate, especially at the time the UN General Assembly is taking place in New York,'' the daily further said.

In the later part of the tweet, the daily said that it has taken ''necessary steps to ensure internal procedures,'' and they deeply ''regret and apologise'' for the artwork.

It may be noted that Prime Minister Narendra Modi and his Pakistani counterpart are due to address the UN General Assembly on Friday during which they are likely to express their national perspective on the Kashmir issue.

PM Imran Khan's recent attempts to internationalise the Kashmir issue has fallen flat as the international community has strongly backed India, saying Kashmir is New Delhi's internal mater and supported its decision to scrap Article 370 of the Constitution that gave special status to Jammu and Kashmir.

India has also categorically rejected US President Donald Trump's repeated offer for mediation on Kashmir, saying that ''no third-party mediation'' is required on Kashmir. PM Modi has presented his government's actions in Kashmir as essential to counter separatism and terrorism, which he accuses Pakistan of fomenting.

Khan now faces an uphill task over Kashmir as Trump has become a close political ally of PM Modi and even appeared as his guest last Sunday at a Texas rally of Indian-Americans.