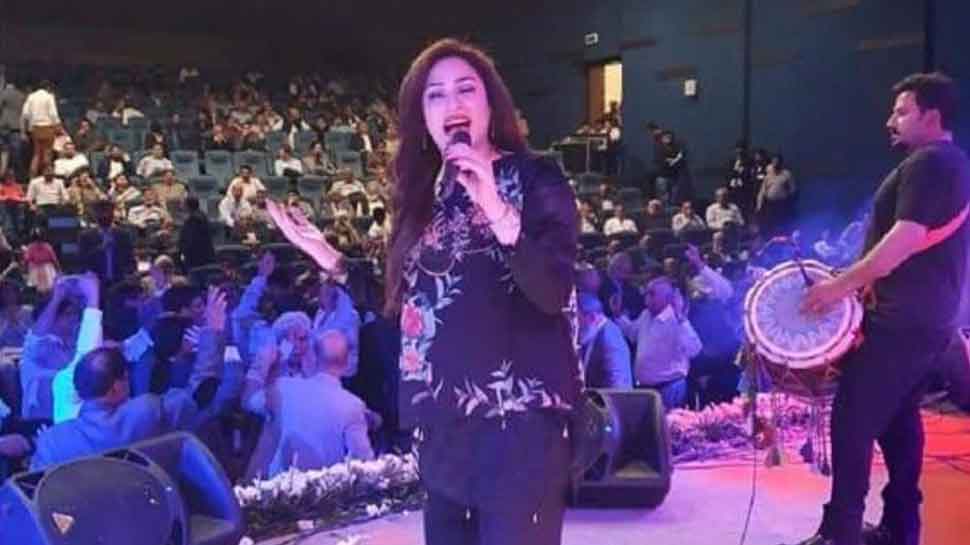 October 26 is the day the princely state of Jammu and Kashmir acceded to the Dominion of India. The show was organised by the Inter-Services Public Relations (ISPR), the media wing of the Pakistan armed forces, for the officers to show solidarity for Kashmiris.

However, the event, which got leaked through Humaira`s tweets, drew sharp reactions from the Pakistani Twitterati. Later, Humaira deleted her tweet, which by the time caused enough embarrassment for Islamabad. You can visit the following link -- https://www.trendsmap.com/twitter/tweet/1188658108421292032 -- to see Humaira`s reactions to her tweet which was later deleted.

Talking over the phone with IANS, Humaria`s public relations manager Rizwan confirmed that she had performed on Sunday. However, he did not elaborate on the venue of the event.

Rizwan, who manages Humaira`s shows, revealed that the pop singer charges Rs 8 lakh to Rs 9 lakh for performing for a two to three-hour show in Pakistan. He refused to comment on whether ISPR made any payment to Humaira for the show.

In its desperate bid to raise the Kashmir issue and seek the support of Pakistanis from around the world, Prime Minister Imran Khan had decided to observe a black day on Sunday.

Demanding immediate "lifting of curfew in Kashmir, Imran Khan had reaffirmed Pakistan's "unflinching moral, political and diplomatic support" to the people of Kashmir.

The state-run Radio Pakistan had reported that several programmes, including rallies and seminars, were planned throughout the country to express solidarity with the people of Kashmir.

However, the manner in which top army generals expressed their solidarity in support of Kashmir has embarrassed the Pakistani establishment. Sources said that an enquiry has been initiated to find out why a pop singer was invited at the GHQ.

In a damage control exercise, the army also instructed Lahore-based Punjabi pop singer Humaira to delete her tweet relating to her performance at the GHQ.

The tweet, which carried two photographs of the event, drew sharp reactions from social media users.

A prominent social media activist in Pakistan, A. Kiyani, replied to Humaira`s tweet: "Item songs and music for Pak Generals but bullets & bombs for Kashmiris. Welcoming Punjabis from Kartarpur while making Kashmir a battlefield and graveyard for Kashmiris. We know every evil play of these Generals. About time AJK starts its own Azadi movement from Pakistan."

One of Humaira`s followers, Nida Kirmani, reacted: "Zoom in on the uncles dancing in the front and the half-filled auditorium of uncomfortable-looking people. Want to be angry, but it`s just too sad."

Ali Azmat Malik, another social media activist, commented: "What ???? #ISPR is managing stage shows at GHQ? Really?? Is this happening in any other Army? #DGISPR I'm big fan of Pak Army but this is totally wrong."

Meanwhile, the local media in Pakistan did not carry any news of the `Humaira night` even as the Twitterati was abuzz with the controversial show.