In a first, Indian waterways used to connect Bhutan, Bangladesh

The ship was digitally flagged off by Minister of State for Shipping Mansukh Mandaviya and will use the Indo Bangladesh Protocol Route. 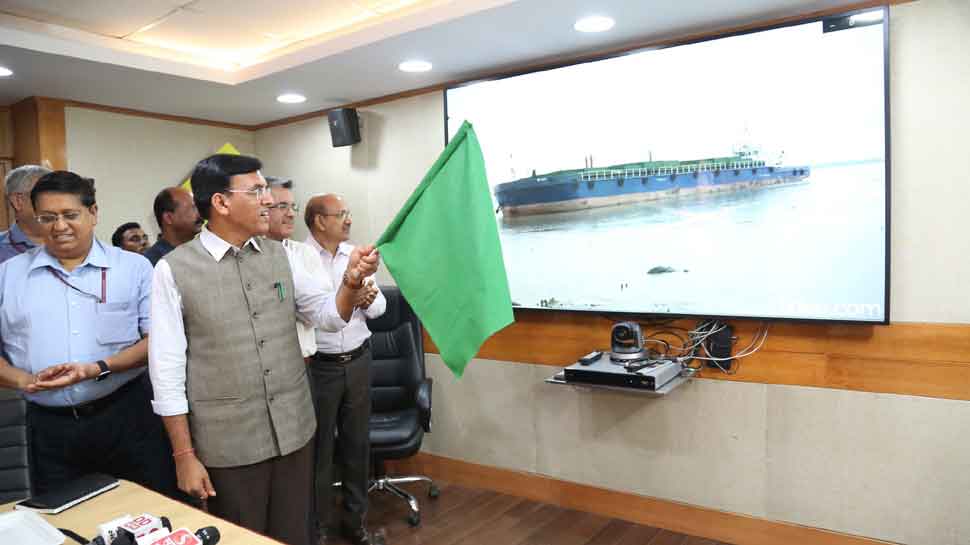 New Delhi: In a first-ever development, Indian waterways is being used to transport cargo between 2 countries. 1000 metric tons (MT) of stones from Bhutan are being transported to Bangladesh using the Brahmaputra by ship MV AAI which set sail from Dhubri in Assam on Friday. The Inland Waterways Authority of India’s (IWAI)'s ship will reach Narayanganj in Bangladesh with the Bhutanese cargo.

The ship was digitally flagged off by Minister of State for Shipping Mansukh Mandaviya and will use the Indo Bangladesh Protocol Route.

Speaking on the occasion, the minister said, "transport of cargo through this route will cut short travel time by eight to 10 days, and reduce transportation cost by 30 per cent, bringing down logistics costs".

The stones were transported by trucks from Phuentsholing in Bhutan to Dhubri in Assam, and the total distance between the both is 160 km. If the same 1000 MT of stones is carried via road, 70 trucks will be needed.

At least 10 other National Waterways are under development currently. Bhramaputra river is National waterway number 2.

India is increasingly using its rivers to transport cargo which is cheaper than transport on roads.

With about 14,500 km of navigable waterways include rivers, canals etc currently about 55 million tones of cargo is being moved annually by inland water transport systems.

6 dead, over 4 lakh affected as flood situation in 21 districts of Assam remains grave