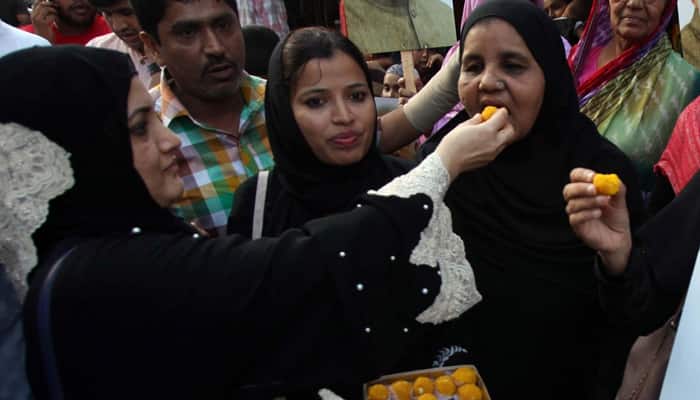 New Delhi: In a historic verdict, the Supreme Court on Tuesday by a 3-2 decision banned the centuries-old practice of instant triple talaq among Muslims and set it aside on several grounds.

A five-judge Constitution bench, comprising Justices JS Khehar, Kurian Joseph, Rohinton F Nariman, UU Lalit and Abdul Nazeer said in its order, "in view of the different opinions recorded, by a majority of 3:2 the practice of talaq-e-biddat - triple talaq - is set aside."

The three separate verdicts comprising of 395 pages did not concur with the minority view of the CJI and Justice SA Nazeer that 'triple talaq' was a part of religious practice and the government should step in and bring in a law.

The three judges, Justices Joseph, Nariman and UU Lalit, expressly disagreed with the CJI and Justice Nazeer on the key issue whether triple talaq was fundamental to Islam.

What the bench said:

Referring to the verses of the Holy Quran, Justice Joseph said, "They are clear and unambiguous as far as talaq is concerned. The Holy Quran has attributed sanctity and permanence to matrimony. However, in extremely unavoidable situations, talaq is permissible. But an attempt for reconciliation, and if it succeeds, then revocation, are the Quranic essential steps before talaq attains finality. In triple talaq, this door is closed. Hence, triple talaq is against the basic tenets of the Holy Quran and consequently, it violates Shariat."

Justice Nariman, whose views were concurred with by Justice Lalit, was in agreement with Justice Joseph saying "this form of Talaq must, therefore, be held to be violative of the fundamental right contained under Article 14 (right to equality) of the Constitution of India."

Upholding the NDA government's view that the practice was against fundamental rights like equality and dignity, Justice Joseph referred to the four sources of Islamic law - Quran, Hadith, Ijma and Qiyas.

Maintaining that the Holy Quran was the "first source of law" and pre-eminence has to be given to it, he said "that means, sources other than the Holy Quran are only to supplement what is given in it and to supply what is not provided for. In other words, there cannot be any Hadith, Ijma or Qiyas against what is expressly stated in the Quran. Islam cannot be anti-Quran."

Justice Nariman, in his separate judgement, said, "It is clear that triple talaq is only a form of talaq which is permissible in law, but at the same time, stated to be sinful by the very Hanafi school which tolerates it."

He referred to the fact that triple talaq is "instant and irrevocable" and leaves no scope for reconciliation between the husband and wife by two arbiters from their families, which is essential to save the marital tie and was not in sync with the Holy Quran.

"It is clear that this form of talaq is manifestly arbitrary in the sense that the marital tie can be broken capriciously and whimsically by a Muslim man without any attempt at reconciliation so as to save it," he said.

Disposing six pleas including a suo motu petition titled 'Muslim Women's Quest For Equality', Justice Joseph relied on the 2002 apex court verdict in the Shamim Ara case in which it was held that "triple talaq lacked legal sanctity".

It referred to various High Court verdicts and rejected the plea of parties like All India Muslim Personal Law Board (AIMPLB), a representative body of Muslims, that the Shamim Ara case did not create a legal precedent.

"Talaq must be for a reasonable cause and be preceded by attempts at reconciliation between the husband and the wife by two arbiters one from the wife's family and the other from the husband's, if the attempts fail, 'talaq' may be effected. In the light of such specific findings as to how triple talaq is bad in law on account of not following the Quranic principles, it cannot be said that there is no ratio decidendi (the rule of law on which a judicial decision is based) on triple talaq in Shamim Ara case," Justice Joseph said.

He dealt extensively with the AIMPLB plea that triple talaq was integral to Islam as it was in practice for the last 1,400 years.

"Merely because a practice has continued for long, that by itself cannot make it valid if it has been expressly declared to be impermissible," Justice Joseph, in his 26-page judgement, said.

What the verdict means:

With triple talaq being set aside, now Sunni Muslims, among whom the practice was prevalent, will not be able to take recourse to this mode as it would be "void ab initio" (illegal at the outset).

They are now left with two other modes of securing divorce - 'talaq hasan' and 'talaq ahsan' after the apex court today set aside the 'talaq-e-biddat' or triple talaq.

Under 'talaq ahsan', a Muslim man can divorce his spouse by pronouncing 'talaq' once every month in three consecutive months, which would be signified by menstruation cycles.

As per 'talaq hasan', divorce can be given by pronouncing talaq "during successive tuhrs (menstruation cycles)" with no intercourse during any of the three tuhrs.

The judgement was welcomed by Prime Minister Narendra Modi, various women's organisations, BJP and Congress, among others.

PM Modi, who has been forthcoming on the issue on a number of occasions including last week's Independence Day address, hailed the ruling as 'historic'.

"Judgment is historic. It grants equality to Muslim women and is a powerful measure for women empowerment," he tweeted.

Law Minister Ravi Shankar Prasad said the Centre had coordinated with Muslim women on the issue so that their view could be placed before the apex court as the government's stand.

Terming the verdict as a victory of "constitutional values", Prasad said there were apprehensions whether the government would buckle under pressure the way the Rajiv Gandhi-led dispensation did in 1980s.

"But the Modi government did not do so," he said.

Prasad was referring to the contentious Shah Bano case. The litigation was a maintenance lawsuit, in which the apex court favoured maintenance to be given to the aggrieved divorced Muslim woman. This was overruled by the then Rajiv Gandhi government.

BJP president Amit Shah said it was a victory for Muslim women and their right to live with dignity.

The Congress also called it historic and said it reinforces the rights of Muslim women who were victims for centuries.

In his reaction, AIMIM leader Asaduddin Owaisi said there was need for society to reform.

"Judicial pronouncements and law... experience tells us that what is needed is that society should reform. Reform on the ground should come from society," he said.

Muslim Satyashodhak Mandal (MSM) welcomed the verdict and its president Shamsuddin Tamboli said the judgement will strengthen the movement demanding justice for Muslim women in the country.

The National Federation of Indian Women said the SC verdict is a crucial step towards women's equality and justice as enshrined in the constitution.

On the other hand, the AIMPLB said it welcomes the judgment as it vindicates the organisation`s stand and "accords protection to Muslim personal law", as per IANS.

"As a representative body, we welcome the judgment... The majority (comprising Chief Justice Khehar and Justice Nazir, with Justice Joseph agreeing) has accorded personal laws the status of a fundamental right being protected under the right to practice religion contained in Article 25," the body said in a statement.

"This is a huge victory for us as the judgment vindicates our stand and ensures the fundamental right of citizens of this country to freely profess and practice their religious faith/beliefs," it said.

The AIMPLB added the judgment will "ensure non-interference by the courts in matters of practices emanating from religious texts and belief systems" of different communities.

The Muslim body said that it will examine the issues emanating out of implementation of the judgment and will work to resolve the same.

The AIMPLB pointed out that the reference to Parliament by Chief Justice Khehar and Justice Nazir to address the issue of talaq-e-biddat is "inconsequential being the minority view on this point".

"The verdict therefore cannot be misused by the government to try to interfere with personal laws through legislation," it said.