A meeting of all political parties, including the BJP and the Congress, passed a resolution condemning the terror attack and support being given to it from across the border. 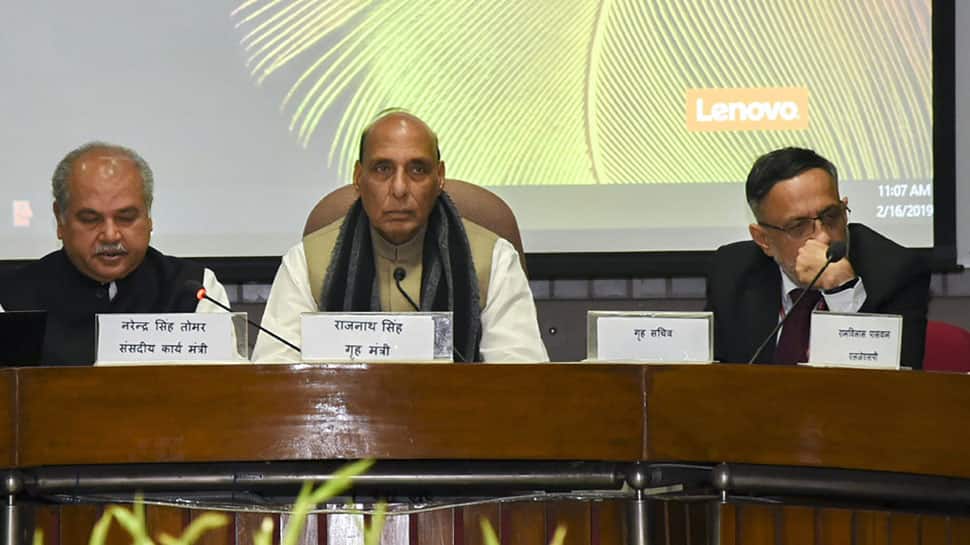 Political parties on Saturday put up a united face and expressed India's determination to fight terrorism following the Awantipora terror attack, underlining their solidarity with security forces for defending the country's unity and integrity.

A meeting of all political parties, including the BJP and the Congress, passed a resolution condemning the terror attack and support being given to it from across the border.

The all-party meeting took place in the aftermath of one of the biggest terror attacks on security forces in Jammu and Kashmir's over Awantipora in which 40 CRPF jawans were martyred. Pakistan-based terror organisation Jaish-e-Mohammad has claimed responsibility for it.

The resolution did not name Pakistan but asserted that India has been facing the menace of the cross-border terrorism which of late, it added, is being actively encouraged by forces from across the border.

The meeting was convened by Home Minister Rajnath Singh. Condemning the dastardly terror attack, the resolution reiterated that India has displayed firmness and resilience in tackling it.

The resolution stated that India has during the past three decades faced the menace of cross-border terrorism.

The parties vowed to stand with the families in their hour of grief.

"India has during the past three decades faced the menace of cross border terrorism. We condemn terrorism in all forms and the support being given to it from across the border. Of late, terrorismn in India is being actively encouraged by forces from across the border, India has displayed firmness and resilience in dealing with these challenges. The entire nation speaks in one voice to express its determination to fight these challenges. We stand united in solidarity with our security forces in fighting terrorism, defending India's unity and integrity," said the resolution passed at the all-party meeting.

The meeting was attended by Ghulam Nabi Azad, Anand Sharma and Jyotiraditya Scindia of the Congress, Sudip Bandyopadhyay and Derek O'Brien of the TMC, Sanjay Raut of the Shiv Sena, Jithendra Reddy of the TRS, D Raja of the CPI, Farooq Abdullah of the National Conference, Ram Vilas Paswan of the LJP among others.

Naresh Gujral of the Akali Dal, Upendra Kushwaha of the RLSP and Jai Prakash Narayan Yadav are among others who attended the meeting.

Political parties have closed ranks following the attack and have offered their support to the NDA government on its response on the matter.

Prime Minister Narendra Modi has talked tough and asserted that those behind it will be punished, and his government has launched a diplomatic offensive to isolate Pakistan within the international community.

It's time to penetrate into Pakistan directly, says Shiv Sena over Pulwama attack