India at UNGA presented a clear choice between peaceful coexistence and pursuit of conflicts: Venkaiah Naidu

Addressing a gathering after presenting the 20th Lal Bahadur Shastri National Award for Excellence: 2019 to Plant Scientist Dr Manju Sharma, he said that the recent session of UNGA presented a clear choice between peaceful coexistence and pursuit of conflicts bordering on perversion. 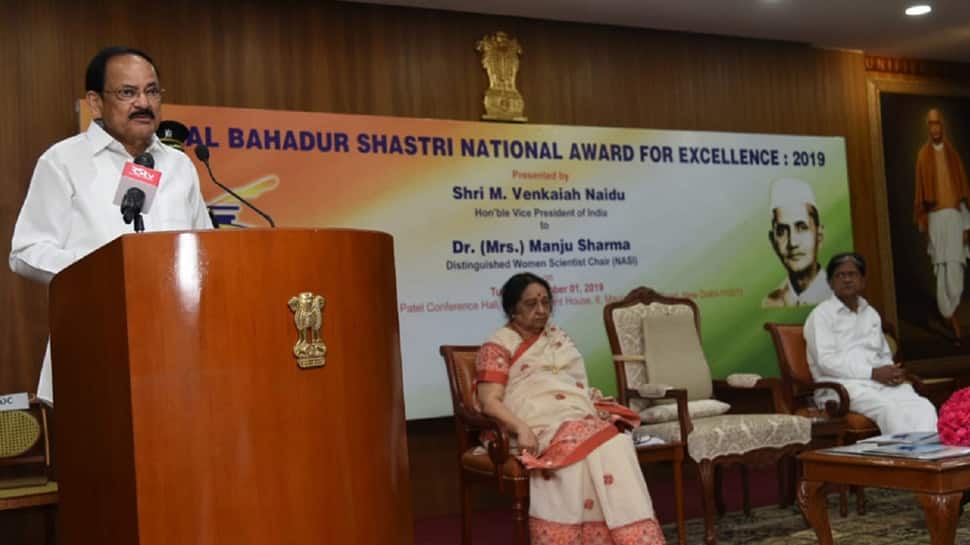 New Delhi: Vice President M Venkaiah Naidu on Tuesday appreciated the way India effectively unveiled its vision for lasting peace and development for humanity at the United Nations General Secretary (UNGA) and hit out at Pakistan for its mindset of `violence, terrorism and warmongering for short-sighted vested interests`.

Addressing a gathering after presenting the 20th Lal Bahadur Shastri National Award for Excellence: 2019 to Plant Scientist Dr Manju Sharma, he said that the recent session of UNGA presented a clear choice between peaceful coexistence and pursuit of conflicts bordering on perversion.

"Humanity had to choose the model of statesmanship showcased by India to march on the path of peaceful development, rather than the brinkmanship-model that has no concern for the larger good of humanity," he said in an apparent attack on Pakistan Prime Minister Imran Khan on his speech at UNGA.

Complimenting Prime Minister Narendra Modi for taking a firm and dignified stand against Pakistan`s "highly condemnable acts", Naidu said that PM Modi championed the cause of peace and prosperity for the larger good. "It brought out in focus two diametrically opposite visions, statesmanship soaring high in the statement of PM Modi and its opposite of brinkmanship stooping too low," the Vice President said.

Asserting that terrorism was the enemy of mankind and that those who aid and abet terror and violence must be isolated, he said that India continued to firmly adhere to its values of peace, in spite of grave provocation from the neighbour who unabashedly aids and abets terrorism. Pointing out that India, since time immemorial has always embraced the values of peace, tolerance, brotherhood and harmony, the Vice President said that India has handled the recent escalation of tensions with remarkable restraint, grace, and poise.

Paying his tributes to Lal Bahadur Shashtri, Naidu said that tall leaders like him firmly believed that peace was the first step to prosperity. He said that their belief, which has deep roots in Indian philosophy, helped them handle and defuse extraordinarily volatile situations with ease and poise.

Referring to Shastri`s address to the nation during the Indo-Pak war in 1965, the Vice President said that he proposed peaceful coexistence to bring an end to conflicts. Asserting that a subcontinent at peace would benefit all and that constant strife, hostility, conflict and terror drag us all down, Naidu said that Shastri Ji`s words serve as a guiding light in our efforts to bring peace and prosperity to the sub-continent.

The Vice President asked the youngsters to learn about the exemplary life of Lal Bahadur Shastri and draw inspiration from it to serve the nation with zeal and passion.

BJP to contest on 164 seats along with smaller allies, Shiv Sena gets 124 seats for Maharashtra assembly election: Sources