A joint statement in this regard was made during the inaugural meeting of the India-Japan Foreign and Defence Ministerial Dialogue (2+2). 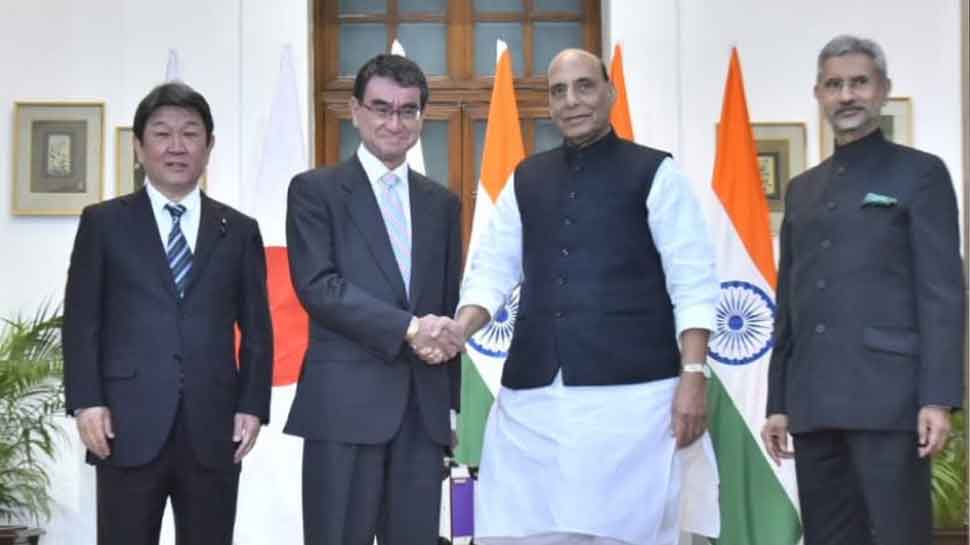 New Delhi: India and Japan together deliberated on the threat posed to the regional security by terrorist networks operating from Pakistan, on Saturday (November 30). Both the countries called upon Islamabad to take "resolute and irreversible" action against them and "fully comply" with international commitments to deal with terrorism, including the steps proscribed by the Financial Action Task Force (FATF) in its Foreign and Defence Ministers 2+2 Dialogue meeting.

The meeting was attended by Union Minister Rajnath Singh, Minister of External Affairs of India and the Japanese delegation was led by country's Defence Minister Taro Kono and Foreign Minister Toshimitsu Motegi.

The 2+2 meeting was held in pursuance of the decision taken by Prime Minister Narendra Modi and his Japanese counterpart Shinzo Abe during the 13th India-Japan Annual Summit.

The meeting was held to strengthen the ties between both the countries by deepening bilateral security and defence cooperation. Several points, including the international partnership in countering terrorism and violent extremism, were one discussed.

2. The Ministers affirmed that this dialogue will further enhance the strategic depth of bilateral security and defence cooperation. Acknowledging emerging security challenges, the Ministers reiterated their commitment to advancing bilateral security cooperation based on the 2008 Joint Declaration on Security Cooperation and the 2009 Action Plan to advance Security Cooperation. Recalling that the two sides had a shared vision of a free, open, inclusive and rules-based Indo-Pacific region in which the principles of sovereignty and territorial integrity are ensured, and all countries enjoy freedom of navigation and overflight, the Ministers emphasized that further strengthening of bilateral cooperation was in mutual interest of both countries and would also help in furthering the cause of the peace, security and prosperity in the Indo-Pacific region.

5. Acknowledging the importance of ensuring maritime safety in achieving a free, open, inclusive and rules-based Indo-Pacific, the Ministers expressed their intention to further promote cooperation in the field of capacity building in maritime security and Maritime Domain Awareness including through cooperation with other countries. In this context, the Ministers welcomed the setting up of Information Fusion Centre - Indian Ocean Region (IFC-IOR) by India in December 2018. The Indian side looked forward to Japanese side dispatching a liaison officer at the IFC-IOR in the near future. The Ministers noted with satisfaction the commencement of exchange of information based on the Implementing Arrangement for Deeper Cooperation between the Japan Maritime Self-Defense Force and the Indian Navy signed last year.

6. The Ministers emphasized the need to further strengthen the defence equipment and technology cooperation and looked forward to productive discussions in the fifth Joint Working Group on Defence Equipment and Technology Cooperation (JWG-DETC). In this context, the Ministers welcomed the progress on cooperative research in the area of Unmanned Ground Vehicle (UGV)/ Robotics.

7. The Ministers appreciated the existing exchange programs between the defence educational and research institutions of the two countries and expressed their desire to continue and expand the exchange programmes.

8. Recalling the Japan-India-US Summit Meetings in November 2018 and June 2019, the Ministers acknowledged the trilateral cooperation with the US. The Ministers expressed their satisfaction at trilateral cooperation represented by the "MALABAR 2019” held from September-October 2019 off the coast of Japan, mine-countermeasures exercise (MINEX) held in Japan in July 2019 and "Cope India 2018” in which Japan participated as an observer in December 2018.

10. The Ministers had a frank and fruitful exchange of views on the regional issues of mutual interests particularly on the security situation in the Indo-Pacific.

11. The Ministers reaffirmed the importance of supporting ASEAN centrality and unity for promoting peace and prosperity of the Indo-Pacific. The Ministers welcomed the adoption of "ASEAN Outlook on the Indo-Pacific (AOIP)” during the 34th ASEAN Summit in Thailand in June 2019. The Ministers expressed their commitment to working together with ASEAN for achieving their shared objectives. The Ministers also reiterated their support for ASEAN-led frameworks such as the East Asia Summit (EAS), the ASEAN Regional Forum (ARF) and ASEAN Defence Ministers’ Meeting-Plus (ADMM-Plus).

12. The Japanese side appreciated India’s announcement of "Indo-Pacific Oceans Initiative” at the recent 14th EAS to create a safe, secure, stable, prosperous and sustainable maritime domain and confirmed their willingness to discuss concrete cooperation based on the Initiative. The Ministers noted with satisfaction that India and Japan’s initiatives for realizing a free and open Indo-Pacific, including also the recent "Indo-Pacific Oceans Initiative” and AOIP all strive for an Indo-Pacific region that is inclusive and open to all countries in the region. The Indian side welcomed Japan’s "Vientiane Vision 2.0” in November 2019 as an updated initiative for defence cooperation between Japan and ASEAN.

14. The Ministers exchanged views on the recent developments in the South China Sea keeping in view also the Chairman's Statement of the 14th EAS. In this context, the Ministers reaffirmed the importance of freedom of navigation and overflight, unimpeded lawful commerce and peaceful resolution of disputes with full respect for legal and diplomatic processes in accordance with the universally recognized principles of international law, including those reflected in the United Nations Convention on the Law of the Sea (UNCLOS). The Ministers also took note of the negotiations of a Code of Conduct (COC) and urged that it should be effective, substantive, and consistent with international law, including the UNCLOS, ensure freedom of navigation and must not prejudice the rights and interests of the stakeholders using the South China Sea and freedoms of all states under international law.

15. The Ministers condemned in the strongest terms the growing threat of terrorism and acknowledged that it constituted a major threat to peace and security in the region. The Ministers called upon all countries to take resolute action in rooting out terrorist safe havens and infrastructure, disrupting terrorist networks and eliminating financing channels and halting the cross-border movement of terrorists. The Ministers underlined the need for all countries to ensure that all territory under their control is not used to launch terrorist attacks on other countries in any manner. They noted in this context the threat posed to regional security by terrorist networks operating out of Pakistan and called upon it to take resolute and irreversible action against them and fully comply with international commitments including to FATF. The Ministers emphasised the need for stronger international partnerships in countering terrorism and violent extremism, including through increased sharing of information and intelligence.