The seriousness of this conclave can be gauged from the fact that the public remained with Zee News on that day to know the opinions of different parties. 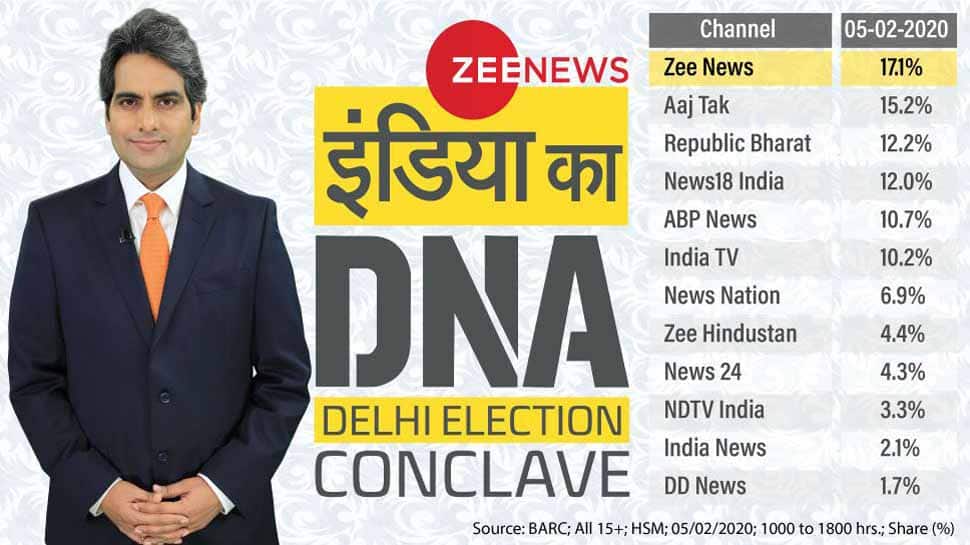 In the run-up to the Delhi Assembly election, Zee News had organised the 'India ka DNA Delhi Election Conclave' event to comprehend the temperament of the voters in the national capital. The full-day event, Delhi Election Conclave, took place on February 5, three days ahead of the voting in which several prominent leaders of the country put their views on the current issues.

The seriousness of this conclave can be gauged from the fact that the public remained with Zee News on that day to know the opinions of different parties. If it is seen from TRP's point of view, in the BARC's rankings of February 5, Zee News consistently remained on the number one position, beating all channels. Zee News ranked first with a rating of 17.1%. At the same time, AAJ TAK, which claimed the fastest channel, was second with 15.2% rating and Republic Bharat by 12.2%. News18 India came in fourth with 12% while ABP News came in fifth with 10.7%.

It is noteworthy that during the event, speaking in favour of the Citizenship Amendment Act (CAA), Union Law Minister Ravi Shankar Prasad challenged anyone to highlight a section of the CAA that proves that it will lead to the loss of citizenship of an Indian.

"Those who talk about democratic values, I want to ask the question, where were those people when the women journalists of Zee News were forced to suffer indecent behaviour? If what happened to the Zee News journalists at Jamia and JNU, had a BJP worker done something of that sort, then a ruckus would be created," Prasad had said.