Pinaka is a multiple rocket launcher, which is capable of firing a salvo of 12 HE rockets in 44 seconds. 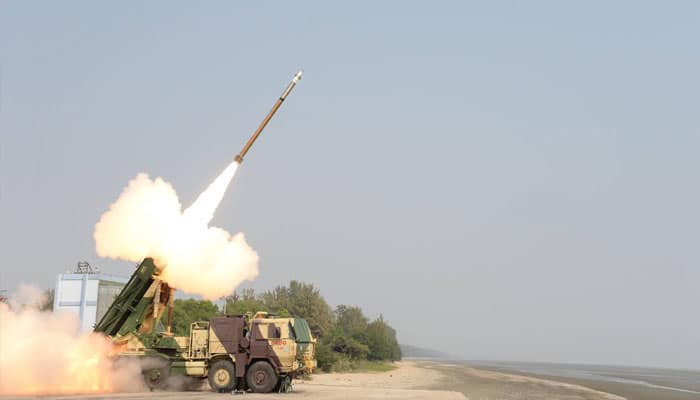 In a boost for Indian Army, the Defence Research and Defence Organisation on Monday successfully carried out two tests of Pinaka guided extended range rockets at Pokhran range. Both the rockets succeeded in hitting their targets at 90-km range, ANI reported.

The rockets were monitored by radars, electro-optical systems and telemetry systems at Proof and Experiment Establishment (PXE) through their flight path.

"In both the missions, the weapon systems impacted the intended targets with high precision and achieved desired accuracies. Telemetry systems tracked and monitored the vehicle all through the flight path. All the mission objectives have been met," the DRDO said in a statement.

Developed by Defence Research and Development Organisation (DRDO), Pinaka is a multiple rocket launcher which is used by the Indian Army. It is capable of firing a salvo of 12 HE rockets in 44 seconds. The system is mounted on a Tatra truck for mobility. Pinaka was used extensively during the Kargil War to destroy enemy positions on the mountain tops.

The battery which is generally deployed by Army has a total of 72 rockets, which can be fired in 44 seconds. Each launcher can be used to fire rockets in a different direction too. The system has a fire control computer too, which provides it the flexibility to fire all the rockets in one go or only a few. Each launcher comes equipped with an individual computer, which allows it to operate autonomously if it gets separated from the other five vehicles. The launcher can operate in autonomous mode, stand-alone mode, remote mode and manual mode.