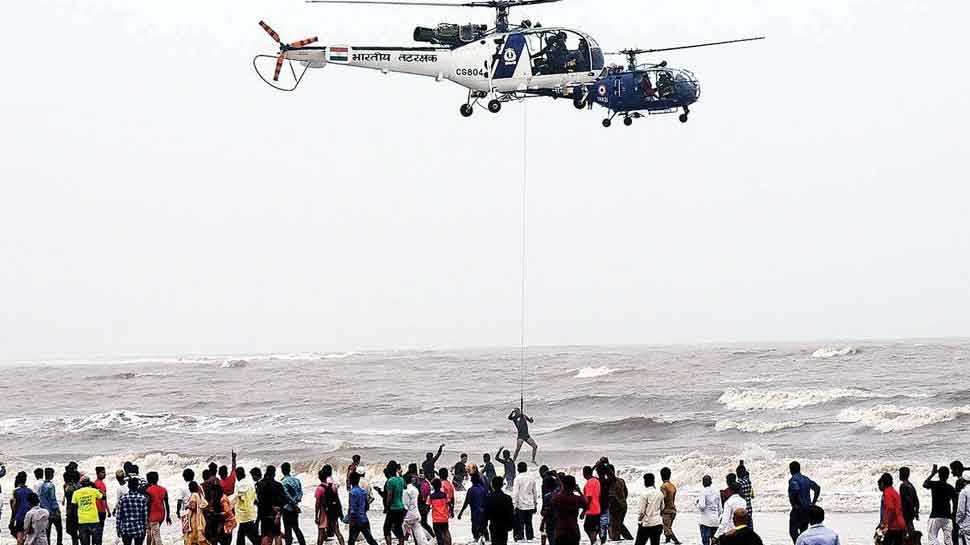 New Delhi: The Ministry of Home Affairs has completed the modalities of setting up a new armed force -- Central Marine Police Force -- to strengthen coastal security. A final proposal would be sent to the Cabinet by early next month for approval, a source in the ministry said on Saturday.

About the structure of the force, a senior ministry official said, "Unlike other Central armed police forces, the Central Marine Police Force will have its own cadre, rules, manual, Act, infrastructure and would be headed by a Director-General rank officer."

The proposal to constitute a Central Marine Police Force was made in mid-2016. However, it was not taken up with much enthusiasm, but with recent several intelligence inputs indicating that "Pakistan-based terrorist groups have plans to carry out attacks on important installations and cities located along the coast after infiltrating their cadre through sea route", the ministry expedited the move to form the armed marine force.

The officer, working on the constitution of the marine force, said when Rajiv Gauba was Home Secretary, he had been pushing to expedite the process and had raised the matter at several occasions during internal security meetings. Gauba is currently Cabinet Secretary.

"So far, in order to strengthen coastal security, a Coastal Security Scheme has been implemented in phases since 2005, with the objective of strengthening capacity and infrastructure of the police force of the coastal states/union territories for patrolling and surveillance of coastal areas, particularly shallow areas close to the coast," said the officer.

The Phase-I of the scheme was implemented during 2005-2011 with an outlay of Rs 646 crore. Under Phase II (2011-2020) of the scheme, an amount of Rs 1023.50 crore has been allotted for procurement of 225 new boats based on the vulnerability assessment of the coastline and a total of 60 jetties have been sanctioned to coastal states and union territories.

Under the scheme, 200 coastal police stations are operational, and coastal police has been equipped with 204 boats, 30 jetties, 284 four-wheelers, 554 two-A wheelers, 97 check-posts, 58 out-posts and 30 barracks.

Coastal security is reviewed periodically with all stakeholders by National Committee on Strengthening Maritime and Coastal Security against threats from the Sea (NCSMCS) constituted under the Cabinet Secretary.

The government also found that there are significant variations in utilization of resources allocated under Coastal Security Scheme by various states besides lack of budgetary allocation for operation and maintenance of state marine police.

Looking into these complications, the MHA actively considered the proposal to set up Central Marine Police Force and officers concerned were told to "initiate action in a time-bound manner and communicate the action taken in to the Prime Minister Office".

Currently, a three-tier coastal security ring all along the coast is provided by the State Coastal Police, Indian Coast Guard (ICG) and Indian Navy. The Indian Navy is patrolling along International Maritime Boundary Line (IMBL), while the ICG is mandated to carry out patrolling and surveillance up to the Exclusive Economic Zone of India (EEZ) and the State Coastal Police performs boat patrolling in the shallow coastal area.

The Indian Navy has been designated as the authority responsible for overall maritime security.

Director General, Coast Guard has been designated as Commander of Coastal Command and made responsible for overall coordination between the state and the Central agencies in all matters relating to coastal security.

"Coastal Security Scheme is implemented in phases with the objective of strengthening infrastructure of Coastal Police Force for patrolling and surveillance of coastal areas," said the officer.

"Gapless electronic surveillance along the coastline is carried out by using 46 radar stations of ICG and 74 Automatic Identification System Receiver Stations of Directorate General, Lighthouses and Lightships," he said.

Joint Coastal Security Exercises are conducted by ICG, in coordination with other stake-holders to create synergy between the central and the state agencies involved in the coastal security and based on intelligence inputs, coastal security operations are also being conducted.

About strengthening the security apparatus across the coastline, the officer said the Ministry of Defence has increased manpower of Indian Coast Guard. The sanctioned strength of Coast Guard has been increased from 8,149 in 2008 to 16,792 in 2018 which is 100 per cent increase from manpower recruited in 2008.

The ministry also stated that ships and air assets of Indian Coast Guard are fitted with the latest state-of-the-art technology equipment, systems, sensors to enhance surveillance capability of the Coast Guard.