The objective of the Paris Agreement is to prevent an increase in global average temperature and keep it well below two degree Celsius. 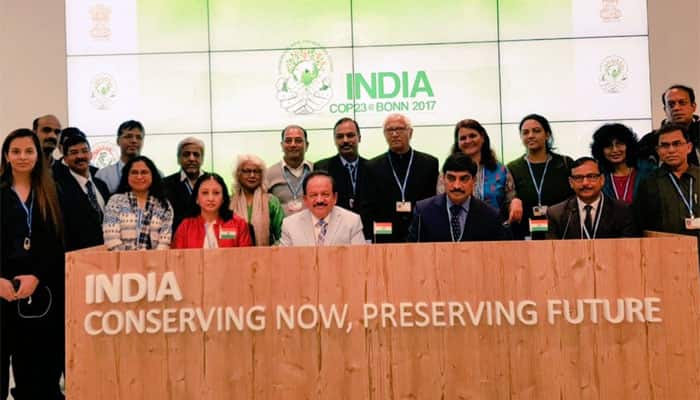 Noting that solving the "crisis" of climate change is not a question of politics but a moral obligation, he said although India's per capita emissions are only one-third of the global average, and its contribution to global stock of carbon dioxide is less than three percent, it has still moved ahead with implementation of path-breaking initiatives.

On the first day of the summit, India also called for early time-bound ratification of second commitment period of the Kyoto Protocol (KP II) by developed countries to ensure the highest possible mitigation efforts under the UN Convention by all countries.

The minister said India has been ambitious in its climate change actions and expects other countries to be ambitious based on their historical responsibility on the basis of equity and common but differentiated responsibilities.

"India considers climate change a major threat to our collective well-being and wishes to play a positive and constructive role in combating it. We have large vulnerable populations and therefore, we take the challenge seriously, especially because climate change shall put disproportionate burden on the poor and marginalised sections of the global community," he said, as per PTI.

The objective of the Paris Agreement, adopted on December 12, 2015, by 195 parties to the United Nations Framework Convention on Climate Change (UNFCCC) is to prevent an increase in global average temperature and keep it well below two degree Celsius.

"We are here with a constructive and positive approach. One of the key global objectives is to develop an inclusive world order that leaves no one behind. Therefore, poverty eradication is one of the most fundamental objectives that we all must work together to bestow upon the future generations a healthy and green planet," Vardhan said.

President Donald Trump had recently announced his decision to withdraw the US from the Paris Agreement on climate change and renegotiate the deal that was agreed upon by over 190 countries during the previous Barack Obama administration.

Arguing that countries like China and India are benefiting the most from the Paris Agreement, he said that the agreement on climate change was unfair to the US as it badly hit its businesses and jobs.

Meanwhile, under the Pre-2020 agenda, developed countries are to ratify the second commitment period of the Kyoto Protocol (KP II) to undertake greenhouse gas emission cuts and also provide finance and technology support to developing countries for enhancing their ambition.

India’s per capita emissions are only 1/3ʳᵈ of global average, contribution to global stock of carbon dioxide is less than 3% #COP23 pic.twitter.com/Q1EtDBYmRV

We've still moved ahead with implementation of bold initiatives like ratification of Paris Agreement under leadership of PM @NarendraModi pic.twitter.com/bbSK7e033D

We have only one planet and humankind must become accountable for the destruction of our collective home. #COP23 is to protect our future pic.twitter.com/YOkSpQLIFX