After Pakistan Prime Minister launched anti-India rhetoric and warned of a potential nuclear war amid escalated tensions between the neighbouring countries, India has decided to exercise the right to reply option at the United Nations General Assembly (UNGA). 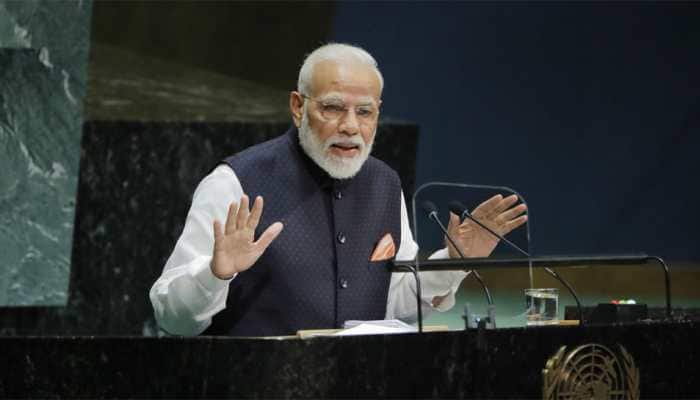 New York: After Pakistan Prime Minister launched anti-India rhetoric and warned of a potential nuclear war amid escalated tensions between the neighbouring countries, India has decided to exercise the right to reply option at the United Nations General Assembly (UNGA).

India would use the option to respond to Imran Khan’s speech delivered at the 74th session of UNGA at the UN building in New York where  PM Narendra Modi had first addressed the gathering at the UN headquarters.

The right to reply usually refers to the right to defend oneself against criticism at the same venue where it was made.

During his speech, an angry Imran Khan appeared to threaten India and said that there would be a bloodbath when India lifts its curfew in Kashmir and that any all-out conflict between the two neighbours – both nuclear-armed - would have repercussions far beyond the shared borders.

Imran Khan launched an all-scathing attack against India at UNGA in a speech that lasted well over 30 minutes, going beyond the stipulated time limit of between 15 to 20 minutes, for a world leader to address the global body. He raked up the Kashmir issue yet again, making nefarious comments against India over its decision to revoke Article 370 in Jammu and Kashmir and taking away its special status.

Meanwhile, PM Narendra Modi, in his address at UNGA, did not even mention Pakistan once in his speech. However, in a veiled reference to the neighbouring country, the Prime Minister said that terrorism affects all countries globally and called on the international community to unite against the menace for the sake of humanity.

PM Modi's focus lied on informing the annual gathering of world leaders at the United Nations on Friday that India was doing enough to combat climate change which includes launching a campaign to stamp out the use of single-use plastics. "Even as I am addressing you today a very large campaign is being started across the entire country to make India free of single-use plastic," PM Modi, who wants to scrap such plastics by 2022, told the 193-member UN General Assembly.

The PM said that terrorism was the greatest threat to humanity and the biggest global challenge. He said that lack of unanimity on the issue dents those very principles that are the basis for the creation of the UN.

PM Modi wraps up speech in 17 minutes, Imran Khan rants against India for over 30 minutes at UNGA