According to BARC data, viewers relied on Zee News for all the updates on Jammu and Kashmir along with Article 370 and Article 35A, making it the highest watched the channel on the day with a total of 19.3 per cent viewers. 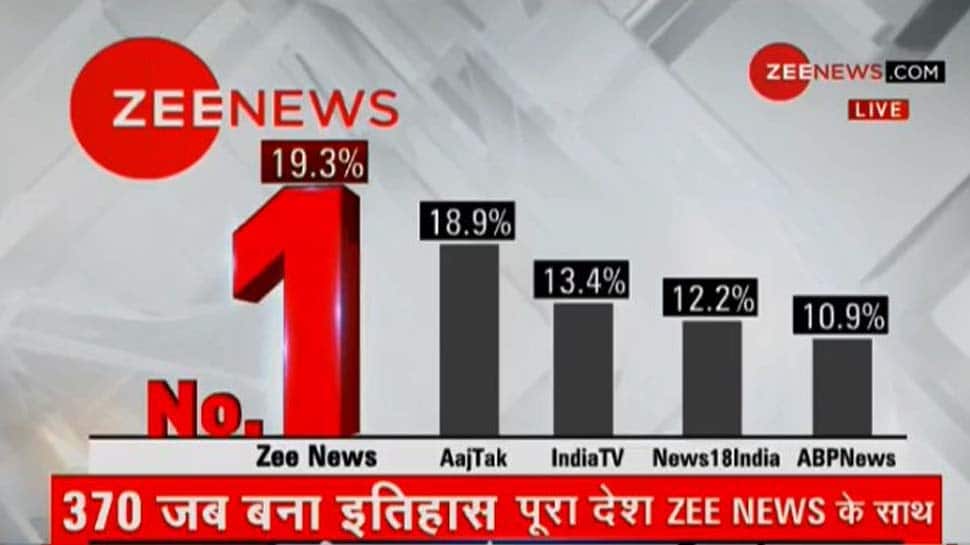 The nation watched Zee News when Centre took the historic decision to abrogate Article 370 from Jammu and Kashmir. According to BARC data, viewers relied on Zee News for all the updates on Jammu and Kashmir along with Article 370 and Article 35A, making it the highest watched the channel on the day with a total of 19.3 per cent viewers. The data pertains to August 5, 2019, between 6 pm and 12 midnight, all 15+ years, HSM urban.

A few days before the decision, the Centre had beefed up the security measures in the region as there is a threat that Pakistan-backed terror groups may try to inflame passions and foment trouble. Curfew was imposed in the former state while internet services shut down and telephone lines blocked. Several Kashmiri political leaders were detained and put under house arrest and preventive custody.

The scrapping of Article 370 was announced by Home Minister Amit Shah in Parliament amid uproar by opposition parties. The decision is in line with what the BJP had promised in its manifesto before the Lok Sabha election 2019.

Shah had made an earnest appeal in Rajya Sabha for politics to be kept on the distant sidelines and for members of the Upper House to come together as one for the people of Jammu and Kashmir. Backing the move to revoke Article 370 in the state, he said that it was the core reason why people here had not had either peace or seen development.