In an informal chat with mediapersons, the CM said SFJ was a hardcore terrorist group, with no ideological basis for its campaign, and had to be treated as such. Describing SFJ’s so-called legal advisor Gurpatwant Singh Pannu as a fraud, operating under the directions of Pakistan’s ISI, the Chief Minister said Pannu’s sole motive was to divide the Sikhs, and India, to promote the ISI agenda. 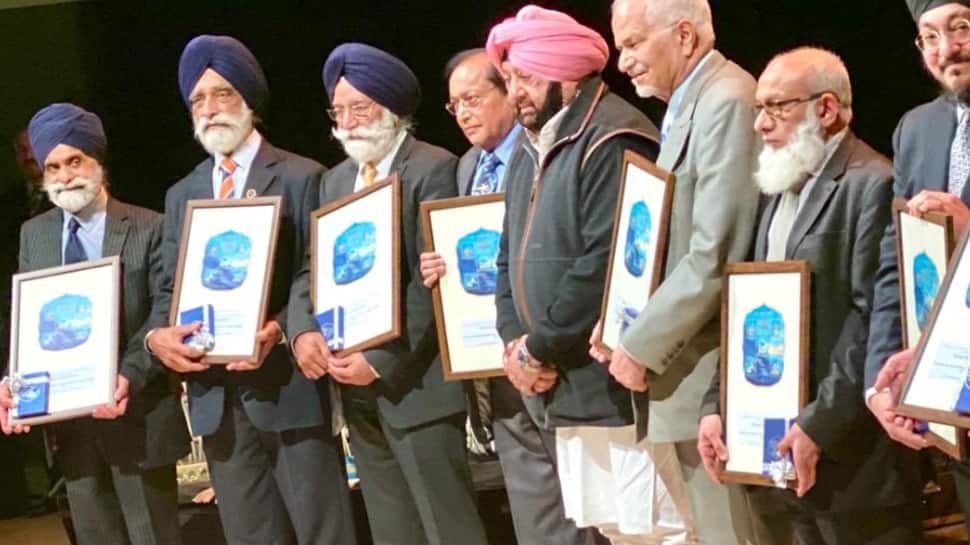 Birmingham: Punjab Chief Minister Captain Amarinder Singh asserted that India will not allow Inter-Services Intelligence (ISI)-backed forces such as the Sikhs for Justice (SFJ) to disturb its harmony and stability but strongly advocated peace and friendship with Pakistan to enable both countries to move forward towards development and progress.

The Chief Minister was in Birmingham, UK, on Sunday night to address the Indian diaspora on the sacred occasion of the 550th birth anniversary of Guru Nanak Dev ji.

In an informal chat with mediapersons, the CM said SFJ was a hardcore terrorist group, with no ideological basis for its campaign, and had to be treated as such. Describing SFJ’s so-called legal advisor Gurpatwant Singh Pannu as a fraud, operating under the directions of Pakistan’s ISI, the Chief Minister said Pannu’s sole motive was to divide the Sikhs, and India, to promote the ISI agenda. Referring to the terror modules busted in Punjab in the past couple of years, along with large-scale arrests and seizure of weapons, he said these had exposed SFJ’s intentions, but both the Punjab government and the Indian government were dealing with it with an iron hand.

Earlier, addressing the diaspora, the Chief Minister called for cordial and friendly relations with neighbours to promote peace, in line with Guru Nanak Dev ji’s philosophy, for the collective resolution of global problems. Both India and Pakistan had been through a lot, and it was time now for them to let go of the past and move forward in the spirit of friendship to ensure their respective progress, he stressed.

Citing the Kartarpur Corridor as a beginning towards better relations between India and Pakistan, Captain Amarinder hoped it would set the stage for opening of other important religious shrines in Pakistan to Indians seeking `khulle darshan deedar.’ The Chief Minister recalled his family’s association with Kartarpur Sahib, which his grandfather had rebuilt after it was devastated by floods back in 1927, as well as other gurdwaras now in Pakistan.

Thanking both Prime Minister Narendra Modi and Pakistan PM Imran Khan for this historic initiative, he shared with the audience that he had an interesting chat on cricket with Imran on their bus journey from Zero Point to Kartarpur Sahib gurdwara, in the context of the fact that the latter’s uncle had played for Patiala in the pre-independence era.

In his informal chat with mediapersons later, the Chief Minister reiterated his demand for waiver of passport condition and the $20 fee for travel through the Kartarpur Corridor, pointing out that India had never imposed any such tax on those visiting Ajmer Sharif and Nizamuddin Dargah etc from across the border.

At the commemorative event, the Chief Minister honoured several prominent NRIs based in the UK.

Pointing to Guru Nanak’s philosophy of oneness of God, the CM underlined the need to rise above religion and caste to protect the future and facilitate the development of Punjab and its people. What the founder Guru of Sikhism had indicated 550 years ago was happening now, he said, pointing to global problems like pollution and water scarcity. He stressed the need for friendship and togetherness to tackle these problems and look ahead, towards the creation of a better future for the next generation.

His government, said Captain Amarinder, would continue with the 550th Prakash Purb celebrations for another year to disseminate the message of the Guru, who had taught the importance of protecting the nature through his ideology of `Pawan Guru, Paani Pita, Maata Dharat’. The decision to set up the Guru Nanak chair in 11 universities, including one in Iran, was aimed at researching the Guru’s travels and philosophy so that the same could be disseminated effectively for the good of humanity, he added.

The Chief Minister sought the Indian diaspora’s help and support in enabling the industrial growth of Punjab, which he stressed needed to be weaned away from the water-guzzling paddy crop. Indians, especially the Sikh community, had worked hard to contribute to the society of whichever country they had chosen to settled in, and it was time now for them to look back at their roots, said Captain Amarinder, urging them to invest in Punjab’s economic growth. Punjab had been divided thrice, and in the process had lost precious resources and industry, which the Punjabis had rebuilt from the scratch with their hard work, he observed, adding, however, that much more was still required if the state had to be saved for the future generations. “You must remember where you originated, and must contributed in any way you can for the progress of Punjab,” he appealed to the diaspora.

The Chief Minister invited Indians in UK to the Progressive Punjab Investors’ Summit, being held on December 5-6, to help the state make its much-needed shift from agriculture to industry for its economic progress and for the generation of employment for the youth. Pointing out that Punjab was suffering the problem of plenty, with surplus paddy and wheat crops with insufficient storage, he said the state needed investment to break away from its agricultural cycle to become an industrial state. Indians in other countries should contribute to these efforts in order to secure the state and its future generation, he said, adding that his government would appoint an officer in the CMO, in the rank of deputy PSCM, to handle queries of all NRIs and facilitate them in making investments in Punjab.

Earlier, Ruchi Ghanashyam, High Commissioner of India to UK, said the message of Guru Nanak Dev ji was more relevant than ever before, in view of the challenges of terror and divisiveness being faced by the world. She lauded the celebrations organised by the Punjab government to mark the 550th Prakash Purb, which she said was being commemorated in the UK also in a big way. She also presented the Chief Minister with a hand painted photograph of Kartapur Sahib Gurdwara.

On the occasion, a representative of the Lord Bishop of Birmingham presented to the Chief Minister a special plaque created to mark the 550th birth anniversary celebrations of the Founder Guru.