Piloted by a two-member crew (pilot, co-pilot/gunner), the AH-64E has one 30 mm M230 Chain Gun with 1,200 rounds, and four pylon stations on the wings armed with missiles and rockets. Apache's two wingtips also have a hardpoint on which AIM-92 Stinger twin missile packs can be mounted. 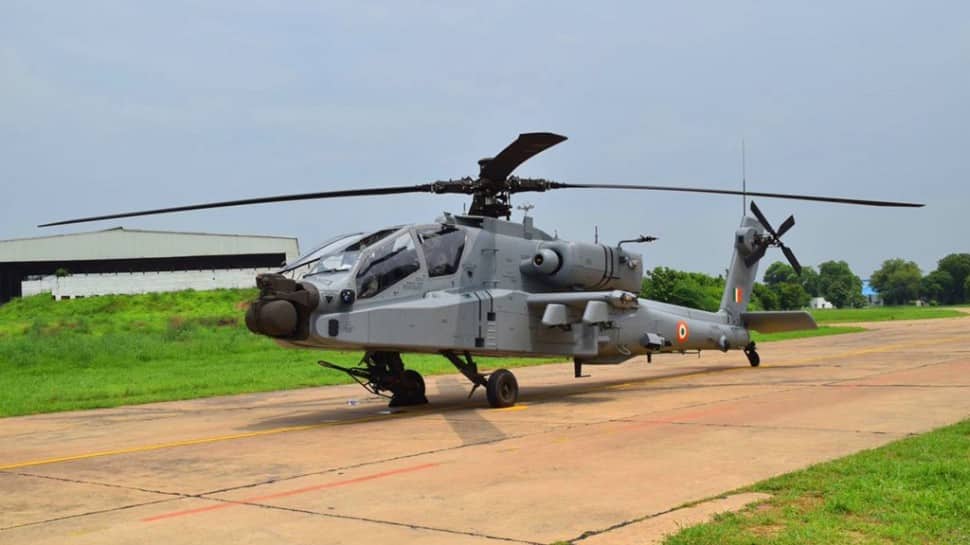 Armed with an array of latest weapons, the twin-engine AH-64E Apache Guardian helicopters of the Indian Air Force (IAF) can be formidable and lethal in the battlefield forcing the enemy to run helter-skelter after its guns and missiles start firing. Under the multi-billion dollar contract with the United States of America and Boeing Ltd in September 2015, the IAF is getting 22 AH-64E Apache, eight of which were inducted into the force's No. 125 Helicopter Squadron (Gladiators) at Pathankot Air Force Station on Tuesday.

Piloted by a two-member crew (pilot, co-pilot/gunner), the AH-64E has one 30 mm M230 Chain Gun with 1,200 rounds, and four pylon stations on the wings armed with missiles and rockets. Apache's two wingtips also have a hardpoint on which AIM-92 Stinger twin missile packs can be mounted. The helicopter can carry Hydra 70 mm, CRV7 70 mm, and APKWS 70 mm air-to-ground rockets along with AGM-114 Hellfire and Spike missiles on the pylon stations. It can be fitted with 38 unguided Hydra rockets and eight Hellfire missiles, can destroy a tank, for an offensice mission.

An extremely versatile attack helicopter, the first Apache entered service with the United States military in April 1986 and since then has seen several variants with the IAF getting the latest version AH-64E. The helicopter has Joint Tactical Information Distribution System which ensures improved digital connection for quick transmission of information and data, the helicopter can also control unmanned aerial vehicles (UAVs)

Instrument flight rules (IFR) compliant and with improved landing gear, the AH-64E sports a new composite rotor blades resulting in increased speed, climb rate along with the ability to carry more payload. The AH-64E has an updated Longbow radar which enables the helicopter to take part in operations over the seawaters too.