The rallies were organised by Indian Americans in several cities of the US to dispel the misinformation and myths surrounding the Citizenship Amendment Act as well as to counter the deliberate propaganda of hate, lies and downright absurdities spread by the Congress supporters, US-based Pakistanis, and some Leftist organizations.

Amid the ongoing protests against the Citizenship Amendment Act in several parts of India, the Indian diaspora in the US from several organizations showed their solidarity to the new legislation by holding rallies in different cities, including Seattle, Austin, Dublin, Houston and Raleigh.  The rallies were organised to dispel the misinformation and myths surrounding the act as well as to counter the deliberate propaganda of hate, lies and downright absurdities spread by the Congress supporters, US-based Pakistanis, and some Leftist organizations. 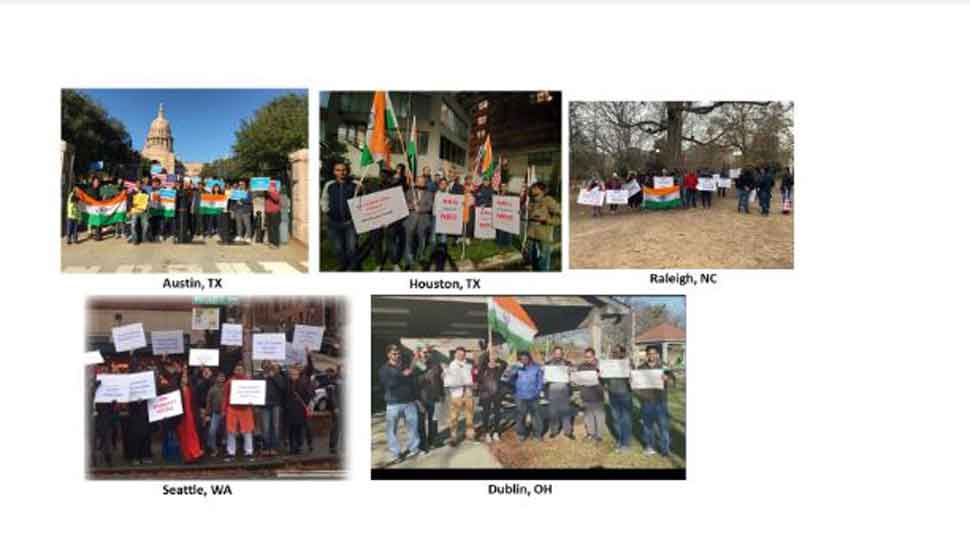 Archana Sunil who is one of the organizers of Seattle rally said, "The anti-CAA rally signs were stating lies about Muslims being discriminated in India, Indian Muslims needing to prove their citizenship, Modi being Hitler, CAA and NRC akin to genocide etc., .. they kept shouting, 'azaadi azaadi .. hum azaadi leke rahenge' and 'Jai Hind', but never said, 'Bharata Mata ki Jai'".

She further noted "when some of the anti-CAA rally came to talk to their group, it was mind boggling to see how much they are misinformed, they just absolutely did not want to talk facts or listen to facts.  Our teenage volunteers were so informed and educated on this topic and those who opposed this act’s illiteracy on the topic is appalling".

Achalesh Amar, spokesperson for Houston rally said, 'the Houstonians came out in big numbers to support the Indian Government decision in bringing CAA to provide relief to oppressed minorities (Hindus, Sikhs, Christians and Buddhists) in neighbouring Islamic countries of Pakistan, Bangladesh and Afghanistan.  He said 'instead of having civil debate based on facts some organizations are bent on subverting any discourse or the truth, by spreading completely absurd lies and what is lost in their discourse is the plight of those who suffered untold sufferings since the partition of India'.

Venugopal  Uppala, who is one of the organizers of the rally in support of CAA in Texas said, that the proposal to grant citizenship to oppressed minorities was proposed by freedom fighters and politicians across many parties since India’s independence ( Mahatma Gandhi in 1948, Sardar Vallabhai Patel, Jawaharlal Nehru in 1950, Bhupesh Gupta of Communist party in 1964,  Gautam Deb of Communist party in 2010, Tarun Gogoi of Congress party from Assam and Prakash Karat of Communist party in 2012), how can anyone say that this is something to do with the BJP and its politics?

Vineet Goel, who is one of the organizers of Dublin Ohio rally said, "We held this rally  to counter the fear mongering of Islamic and leftist organizations about CAA and NRC, their bizarre statements that NRC in combination with CAA is designed to expel Muslims from India.  Those who do not have the required paperwork have same challenges whether that person is a Hindu or Muslim and in spite of so many assurances from Modi Government that every effort will be made to ease the process for every citizen, these organizations are bent on with the agenda of a 'lie said thousand times will become the truth."