"I congratulate Indian Coast Guard and L&T shipyard to re-introduce the protective spirit of 'Varaha' back to the sea by commissioning of Varaha. I am sure Varaha will enhance the surveillance and patrolling capabilities of the Indian Coast Guard," Rajnath Singh said. 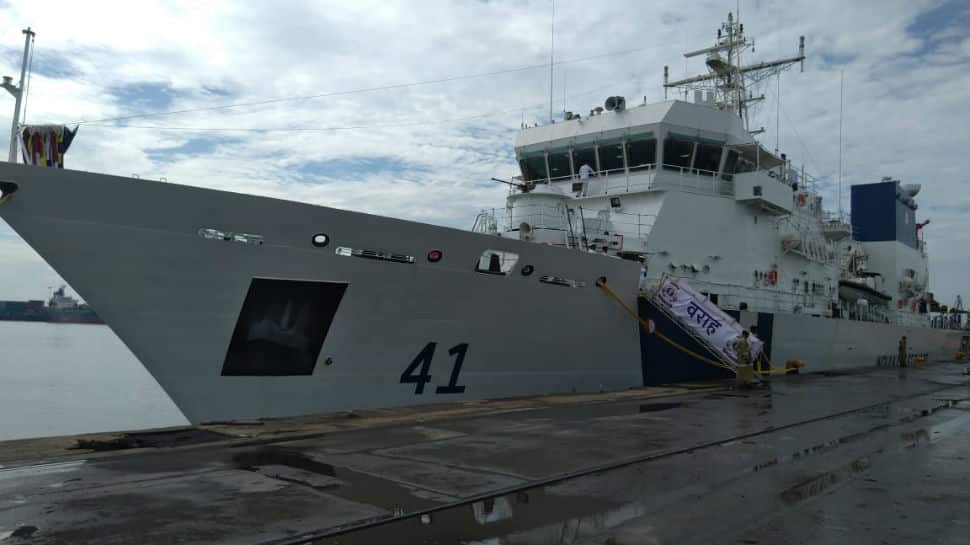 New Delhi: Defence Minister Rajnath Singh on Wednesday attended the commissioning ceremony of Indian Coast Guard (ICG) Ship Varaha in Chennai. Varaha is the fourth in the series of seven 98m offshore patrol vessels. The ship has been indigenously designed and built by L&T in accordance with a contract signed with the Defence Ministry.

The name Varaha is taken from the Puranas, the third incarnation of Lord Vishnu which took the form of a boar to protect mother earth from the ocean, by lifting her on his tusks.

"I congratulate Indian Coast Guard and L&T shipyard to re-introduce the protective spirit of 'Varaha' back to the sea by commissioning of Varaha. I am sure Varaha will enhance the surveillance and patrolling capabilities of the Indian Coast Guard," Singh said.

RM at the Commissioning Ceremony of ‘ICGS Varaha’ pic.twitter.com/JSAOeDelRm

He added, "The tradition of shipbuilding is not new to India, it dates back to Indus valley civilisation. Strong Navy has been our strength since ancient times. During the Chola Empire, the spread of our great culture to East Asia would not have happened without the support of a strong Navy."

Varaha will add to Coast Guards strength in responding to threats of maritime terrorism, smuggling and other challenges such as oil spill, drug trafficking, collision and grounding.

It will operate from the port of New Mangalore on the West Coast covering Exclusive Economic Zone (EEZ) upto Kanyakumari.

Varaha's vessel is fitted by a 30mm gun and will be fitted with a 12.7mm gun. It is designed to carry one twin-engine light helicopter and twin-engine heavy helicopter with night flying capabilities. The ship is also capable of carrying limited pollution response equipment to contain oil spill at sea, the Indian Coast Guard said.

"The ship is well equipped with high-speed boats, medical facilities and modern surveillance systems, which would be an enabler towards our International and National obligations of providing Search and Rescue cover to Mariners in distress at sea," the Defence Minister said.

Varaha displaces 2,100 tons and is propelled by two (9100Kw engines) which are capable of speeds of 26knots and endurance of 5000 nautical miles.

Varaha can stay at sea for 20 days without replenishment.