Held from July 1 to July 12 at Mont-de-Marsan, Garuda VI is a tactical Indo-French exercise aimed at enhancing the interoperability level of the French and Indian crews in air defence and ground attack missions. 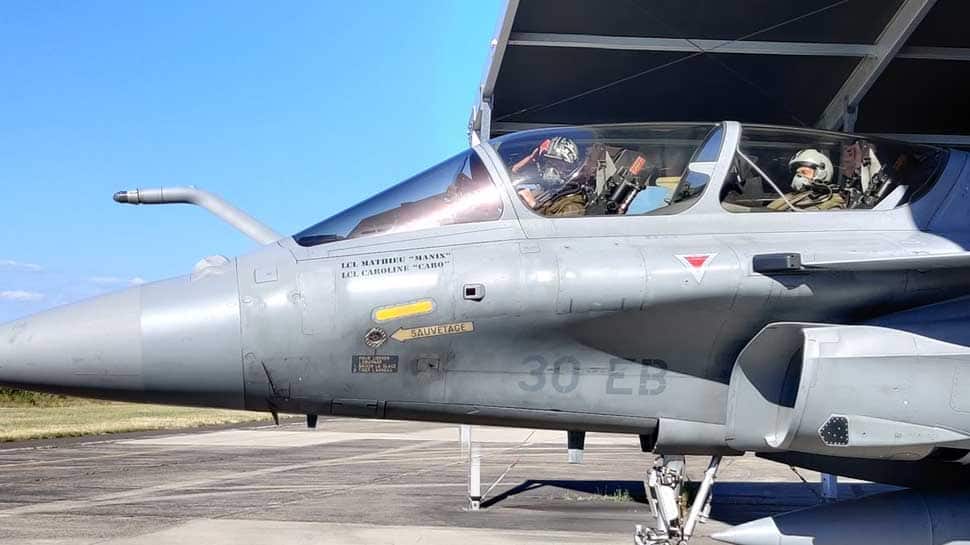 Mont-de-Marsan: Indian pilots taking to Rafale jets during the Indo-French Garuda VI exercise was "amazing," according to General Philippe Lavigne, the Chief of Staff of the French Air Force.

"It was amazing...After two or three flights it feels very comfortable and the feedback I`ve gotten from the squadron says `Wow.` It`s a combat-proven aircraft and the interface is very is nice and clear so it eases the pilot...I think it`s a mix between a very good, experienced pilot and very good aircraft which matched so well," Lavigne told reporters here on Friday.

Held from July 1 to July 12 at Mont-de-Marsan, Garuda VI is a tactical Indo-French exercise aimed at enhancing the interoperability level of the French and Indian crews in air defence and ground attack missions.

#ExGaruda2019 : The Indo-French exercise GARUDA-2019 comes to an end today. The exercise was conducted from 01-12 July 19 at FAF Base Mont-De-Marsan, France.
Glimpses of few memorable moments captured during the exercise.@FranceinIndia @Indian_Embassy @SpokespersonMoD pic.twitter.com/zjkxz8Cyj7

It falls under the global framework of bilateral cooperation between the two nations and is alternately held in France and India."Garuda Exercise over the past five editions and now the sixth one has seen increased complexity of the manoeuvres of the planning and of its implementation.

More importantly, the Garuda exercises are placed in a larger context of very strong, robust, growing, dynamic, strategic partnership between India and France," India`s Ambassador to France Vinay Mohan Kwatra said while highlighting that defence is an important pillar of the India-France strategic partnership.

"We have flown close to 400 hours, out of which, 100 hours were on the Indian aircraft and 300 hours were contributed by the French aircraft," Air Marshal Rakesh Kumar Singh Bhadauria said at the gathering.

"Where we have reached, we ended this exercise with a large force engagement and a very complex planning scenario wherein Rafale and Su-30s flew together against a representative adversary and very realistic scenario.

To reach here, the two airforces did two weeks of exercise together," he added.

The Indian Air Force Vice Chief himself took a sortie on the Rafale aircraft at the French Air Force`s Mont-de-Marsan air base earlier on Friday.

#ExGaruda2019 : Vice Chief of the Air Staff, Air Marshal RKS Bhadauria is a qualified test pilot & he has flown various types of aircraft.
Today he flew in the #Rafale aircraft, adding 01 more aircraft to the list of many.
Glimpses after the mission. pic.twitter.com/bSYEFJeZ2s

"The first week was the builder phase wherein simple combat exercises, starting with one versus one, two versus one and two versus two were flown. Thereafter, the second week was the large-force engagements, which included air-to-air refuelling, missions going from two to two and a half hours, the complexity of the engagement increasing, going on to 15 to 20 aircraft in one force and various forms of packages," he added.

Rahul Gandhi attacks BJP over Goa and Karnataka, accuses it of using 'money and power' to disrupt state