Indian skydiver jumps off plane from 13,000 feet to wish PM Narendra Modi on his birthday

The 35-year-old Padma Shri award winner said she has been trying to meet the PM for the last four years, but her efforts have gone in vain. 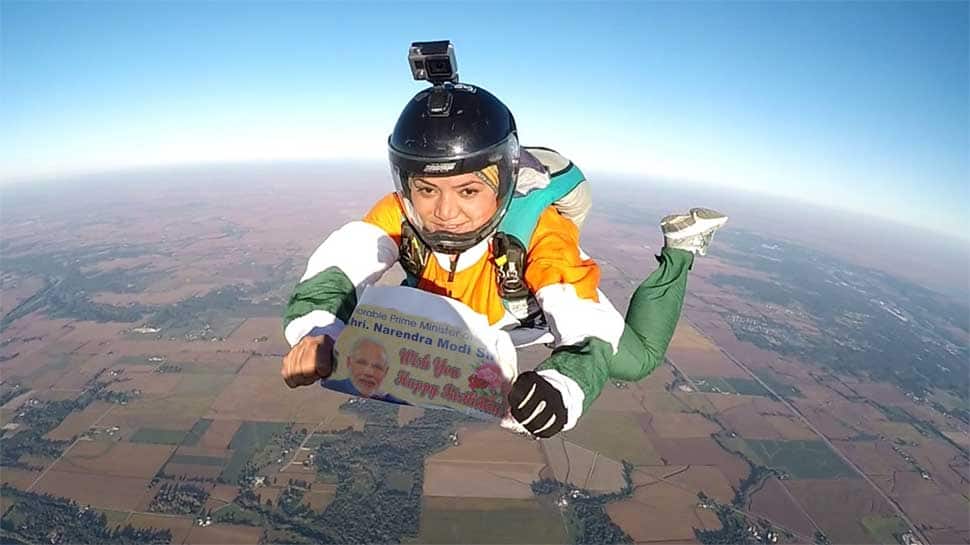 Indian skydiver Sheetal Mahajan jumped off a plane from a height of 13,000 feet while holding a placard to wish Prime Minister Narendra Modi on his birthday on Monday.

Prime Minister Narendra Modi turned 68 on Monday. From ladoos to cakes, his supporters and Bharatiya Janata Party (BJP) members celebrated the day across the country.

PM Modi signed off his 68th birthday with a visit to the famous Shiva temple Kashi Vishwanath in Varanasi where he prayed for about 30 minutes. He drove through the lanes of Kashi Vishwanath temple and waved at the crowds waiting to catch a glimpse of him before entering the temple premises.

He was accompanied by Uttar Pradesh Chief Minister Yogi Adityanath and state BJP chief Mahendra Nath Pandey. A special puja was performed by the priests present at the temple and yellow "chandan", "kumkum" and "bhasm" was smeared on the forehead of the Prime Minister.

The entire city had been decked up as part of PM Modi's birthday celebrations. A large 68-kg cake of "laddoos" was cut by burqa-clad women at the Azam Park in Lahurabir locality.