Indian Navy Chief Admiral Sunil Lanba on Thursday reviewed the construction of the country's first indigenous aircraft carrier - Vikrant, at the Cochin Shipyard. The Navy expects the 40,000-tonne aircraft carrier to be fully operational by 2019. 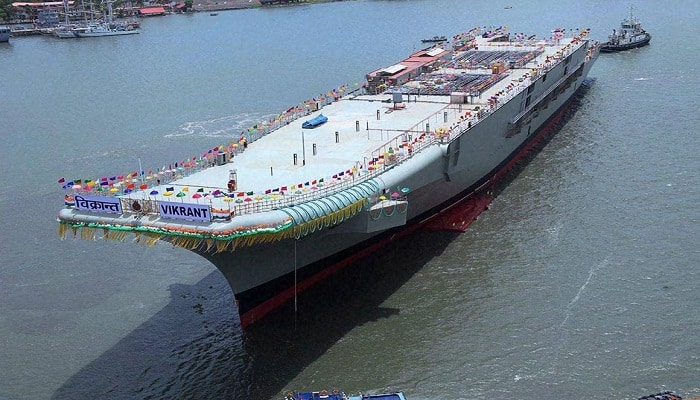 Admiral Lanba took stock of the various construction activities related to Vikrant - named after India's first aircraft carrier that was acquired from the UK in 1961. "At the shipyard, the CNS (chief of Naval staff) accompanied by the FOC-in-C (South) and other senior officials of the Navy took a walk around of the ship to get a first hand appreciation of the progress of work onboard," a Defence release stated.

The ship, which is designed to survive attack by nuclear, biological or chemical weapons, puts India in the elite group of nations like the US, Russia, the UK and France that are capable of designing and constructing aircraft carriers. Once complete, it would be able to accommodate 12 MiG-29Ks, eight Tejas Light Combat Aircrafts and 10 helicopters, and is expected to have a range of 7,500 nautical miles at 18 knots speed.

At an allocated cost of Rs 20,000 crore, its construction - approved first in 2003 - has, however, suffered numerous delays and has taken a toll on Navy resources.

In a report, Comptroller and Auditor General (CAG) had previously highlighted that construction activities are likely to be finished only by 2023. "It is evident from the PERT chart (September 2014) of Cochin Shipyard Limited (CSL) that while the delivery of the carrier with completion of all activities is likely to be achieved only by 2023," read the report.

In sharp contrast, China launched its own indigenous aircraft carrier in April of this year and reports suggest it can become operational by 2020. At 70,000 tonnes, the Type 001A - named Shandong - will help the country edge past India for the first time in number of aircraft carriers each has. India currently has the solitary INS Vikramaditya after it decommissioned INS Viraat earlier in the year.

According to several defence experts, the Indian Navy is also lacking in the number of submarines it has. With 11 of its 13 submarines more than 25 years old, Indian Navy has a big problem at hand - especially in the backdrop of reports that China is looking at expanding its presence in the Indian Ocean. Chinese Navy currently has more than 70 submarines.