Jammu and Kashmir is bilateral issue between India and Pakistan: Zambia

PM Modi on Tuesday announced that India will train Zambian forces. "To increase the capacity of Zambian Armed Forces, Indian military and airforce training team will be stationed in Zambia," said PM Modi. 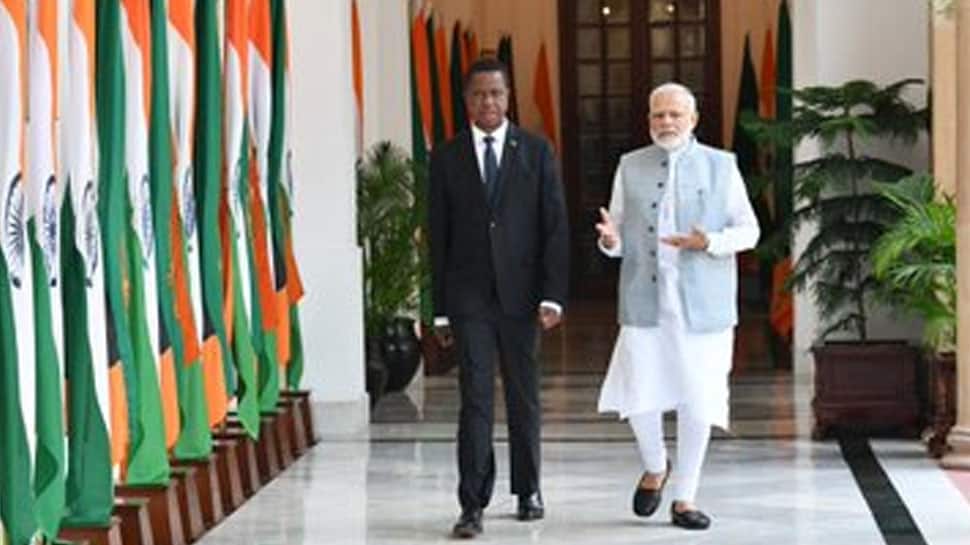 Zambian President Edgar Chagwa Lungu during a bilateral meeting with Prime Minister Narendra Modi said that Jammu and Kashmir is a bilateral issue between India and Pakistan. He is the first African country to react to the current tensions between India and Pakistan. The President is on a three-day India visit and Tuesday was the main day of engagement.

PM Modi on Tuesday announced that India will train Zambian forces. "To increase the capacity of Zambian Armed Forces, Indian military and airforce training team will be stationed in Zambia," said PM Modi. India will also provide 100 solar irrigation pumps, 1,000 tons of rice and 100 tons of milk powder to the southern African country.

Lauding India's role in his country's development Lungu said, "India is an important and strategic partner in Zambia's enhanced quest for socio-economic development." He was given the guard of honour at Rashtrapati Bhawan and paid homage to Father of the nation, Mahatma Gandhi, at Rajghat.

At the visitor's book at Raj Ghat, he said, "All said and done, only acknowledging the truth about past, present and future, can set us mankind free."

President Ram Nath Kovind had paid a visit to the southern African country in April 2018. The bilateral trade between India and Zambia stands at USD 830 million with India importing copper from the country. Zambia is the second-largest producer of copper in Africa with USD 5 billion investment. India is one of the leading investors in the country.