JNU students protest against Zee News, misbehave with reporter during march to Parliament

During their march, placards displaying messages against Zee News was seen. This is not the first time that the students have launched an attack on Zee News. 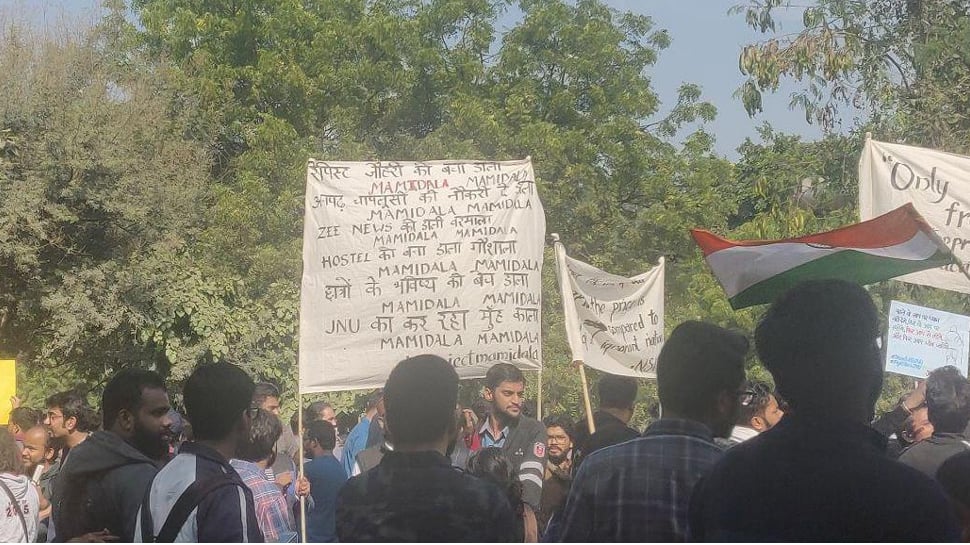 The agitating students of the Jawaharlal Nehru University (JNU) on Monday protested against Zee News, during their march to Parliament on the first day of winter session over their demand for a complete rollback of the hike in hostel fees and several other issues. During their march, placards displaying messages against Zee News were seen. A message read--'No nationalism in your DNA Zee News'.

The JNU students misbehaved with Zee News reporters during their march and used offensive language against the channel and its reporters. This is not the first time that the students have launched an attack on Zee News.

Earlier on Friday (November 15) students of the university were protesting against the hike in fee, and two teams of Zee News reporters were present to cover the protest. These included Zee News correspondents Pooja Makkar and Kavita Sharma. Seeing Zee News journalists, the protesting students went berserk.

The students began arguing with the journalists, while some of them started pushing the cameramen and attempted to damage their property. They also started shouting slogans against Zee News filled with curse words and inappropriate language. They also took potshots at Zee News Editor Sudhir Chaudhury and his primetime programme 'DNA'.

On Saturday, student organisation Akhil Bharatiya Vidyarthi Parishad (ABVP) condemned the manhandling of the reporters. ABVP presidential candidate for JNUSU election Manish Jangid and vice-presidential candidate Shivam Chaurasia strongly condemned the incident and said, "These people talk about freedom of expression, which is a right of the reporters as well. And, whatever happened with the journalists of Zee News on Friday was wrong."

The JNU Students Union (JNUSU) have been protesting for several weeks now because according to them the JNU administration has passed a draft hostel manual on October 3, 2019, without any consultation with the student community. They started their protest from October 29 by boycotting classes and examinations.