JNU students to march to Parliament today over fee hike, urge other universities to join protests 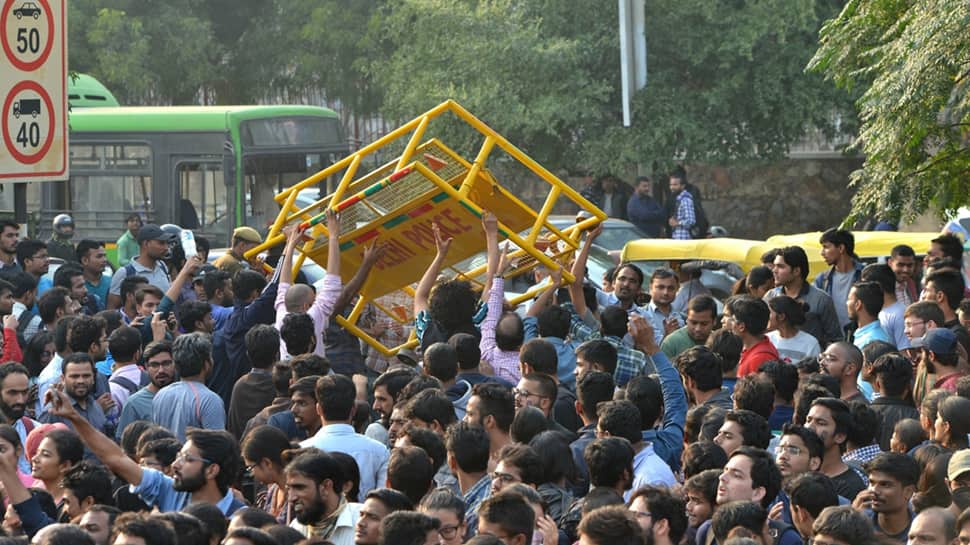 The protesting students of Jawaharlal Nehru University (JNU) on Monday will hold a march to Parliament on the first day of winter session over their demand for a complete rollback of the hike in hostel fees and several other issues. The JNUSU students will assemble at the Sabarmati Dhaba at 10 am and thereafter commence their march.

Apart from JNU, several other university students are likely to join the march. "JNUSU invites students from all Universities to come and join "Save Public funded education March"," read a statement. The JNU students called this march a step to 'Save Public Education'.

Delhi Police is trying its best not to let the protesting students get out of JNU. However, if they come out then they can be taken into custody by the police. Many buses have been arranged for that.

The Central Reserve Police Force (CRPF) personnel has also been deployed outside JNU. The first barricade in near JNU gate and the second barricade is at a distance of 100-200 meter.

The JNUSU on Sunday had released a notice appealing the students to join the foot march from the university campus to Parliament. It has also accused the Ministry of Human Resource and Development (HRD) claiming it to be taking the side of JNU administration and not extending any kind of support to the students.

The student union has been saying that 40 per cent fee hike will force many students to leave the university because they will be unable to afford the expenses. ''We also would like to appeal to students outside Delhi to organize protest gatherings on the November 18 to mark a National Day of Protest, to safeguard education as a right, and oppose its transformation into a commodity. We hope that you shall join us,'' read the JNUSU appeal.

Further, the student unions also claim that the University Administration has not to date opened any channels of dialogue with the elected representatives of the student community, the JNUSU, and the hostel presidents.

On November 11, the JNUSU had staged a massive protest in the national capital over its demands including fee hike, provisions on dress code and curfew timings.