Hundreds of people greeted Kumaraswamy upon his arrival in Chandraki village in Gurmitkal taluk in north Karnataka's Yadgir district.

Bengaluru: Karnataka Chief Minister HD Kumaraswamy has earned praise for having dinner with the school children and sleeping on the floor during a visit to Chandraki village in the Yadgir district on Friday.

According to reports, Karnataka CM arrived at district headquarter town Yadgiri, about 500 km from Bengaluru, by train on Friday.

From here, he reached the Chandaraki village by road to a rousing reception.

The village, about 40 km from Yadgiri, was fully decked up with festoons, posters and flags dotting its roads as Kumaraswamy revived his pet "Grama Vastavya" or village stay programme, which he had launched in his first stint as chief minister in 2006.

Hundreds of people greeted Kumaraswamy upon his arrival in Chandraki village in Gurmitkal taluk in north Karnataka's Yadgir district.

After checking into a state-run school, which has been renovated for the overnight stay, Kumaraswamy held a Janata darshan' pubic interaction) to know first-hand the problems of the people and address their grievances.

Majority of the people petitioned the chief minister for better schools, more primary health centres, road connectivity, timely supply of seeds and fertilisers and jobs for the educated youth.

"The chief minister was also treated to a cultural programme of the region and had dinner with the students of the school he is staying for the night," added the official.

At night, the Karnataka Chief Minister had dinner with the school children and slept on the floor. 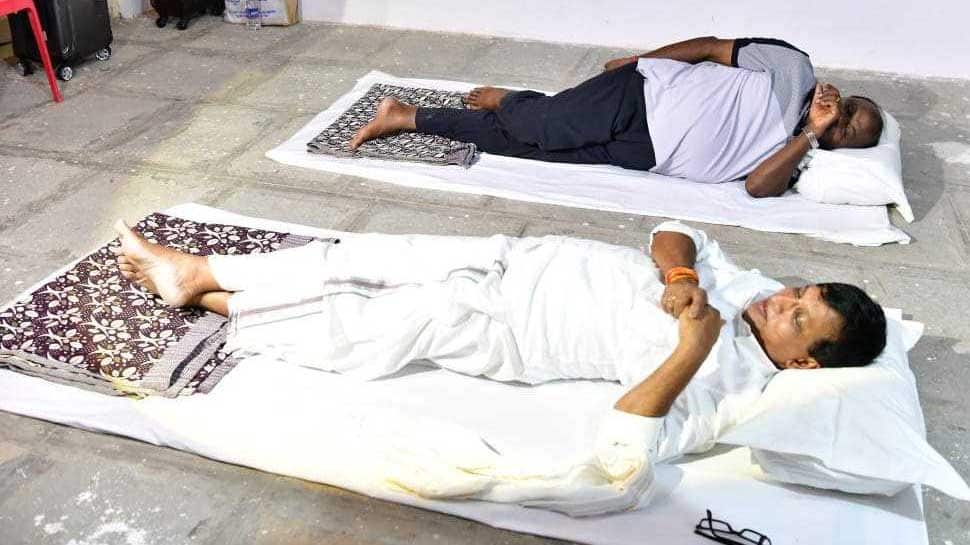 When questioned how he felt during his night stay in the village, he said, ''I don't need any 5-star arrangements. I am even ready to sleep on the road. Want to ask the Opposition if I can't have this basic facility, how will I work every day? A small bathroom is built here. I won't be taking it back with me. It'll help kids here. I came here in an ordinary bus. I didn't come in a Volvo bus. I don't need to learn anything from BJP. I've slept in a hut as well as in a 5-star hotel. When my father was PM, I slept in Grand Kremlin Palace Russia. I've seen everything in life.''

This is the second time Kumaraswamy is starting to stay overnight in a village to interact with its people and know their problems first-hand to address them on the spot.

His village home stays during his tenure as chief minister of then JD-S-BJP coalition government in 2006-07 was very popular as the people were able to meet him freely and air their grievances or seek his help in solving their problems.

On Saturday, Kumaraswamy will drive to Herur hamlet near Afzalpur in the adjacent Kalaburagi district for an overnight stay at a state-run school.

On the following weekend (June 28-29), the CM will stay for overnight at Basavakalyan in Bidar district and Sindanur in Raichur district in the state's northern region.