Amid efforts to save the Congress-JDS coalition in Karnataka, the Congress has accused the Centre of orchestrating the political crisis in the state. 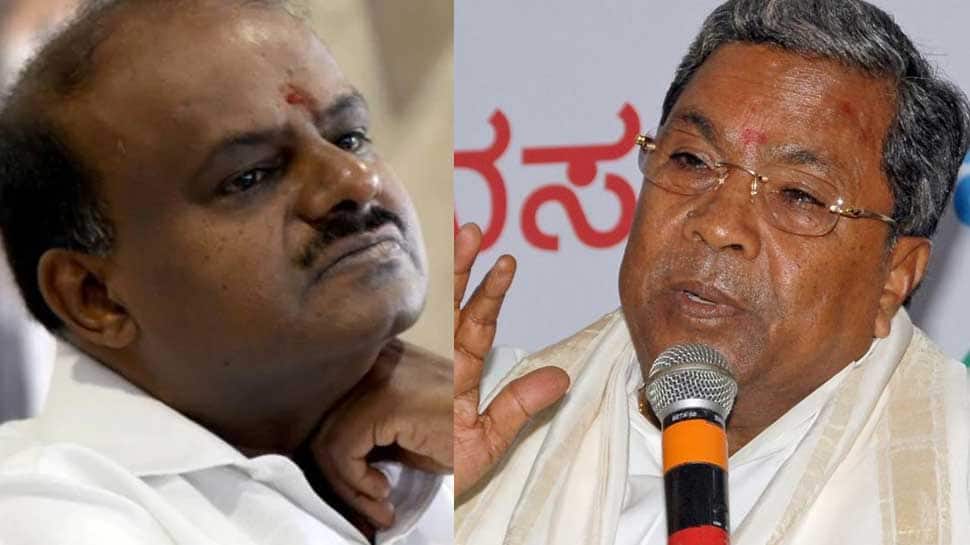 MUMBAI: The political crisis facing the Congress-JDS coalition government in Karnataka led by Chief Minister HD Kumaraswamy deepened further after dissident MLAs, who are staying in Sofitel Hotel in Mumbai, on Sunday said that their decision to resign from the Legislative Assembly was final.

"We are 10 MLAs here. A total 13 MLAs have submitted resignation to Speaker KR Ramesh Kumar and Governor Vajubhai Bala. We all are together. No question of going back to Bengaluru and withdrawing the resignations," Karnataka Congress MLA ST Somashekar said while speaking to media persons outside the hotel.

Karnataka Congress MLA ST Somashekar outside Sofitel hotel in Mumbai: We 13 MLAs submitted resignation to the Speaker & informed Governor. We all are together. No question of going back to Bengaluru & withdrawing the resignations. pic.twitter.com/0ae0ttAlgo

Another disgruntled MLA BC Patil endorsed the views of Somashekhar.

"Whatever Somasekhar said is right. As many as 13 MLAs people have tendered their resignations. No question of going back and taking back the resignation. We are all together. Our decision is final," he said.

Meanwhile, senior Congress leader Mallikarjun Kharge slammed the ruling BJP at the Centre for "taking interest in toppling the alliance government in the state."

"Today also some MLAs went to Mumbai. They have gone under pressure. They have been told many things. Also, the BJP in the state has become active with the help of the Centre. Ruling government at the Centre has taken interest to topple this alliance government. They are trying to get rid of this government," Kharge said while talking to ANI.

Stating that the government should run as per the Constitution, the veteran Congress leader said, "It is a constitutionally elected government in Karnataka. BJP is destabilising it. In about 14 states, they are pressurising, not only the Congress MLAs but also the regional party members."

In a desperate attempt to save their year-old coalition government from the brink, the ruling Congress and Janata-Dal-Secular (JD-S) allies held parleys on Sunday to pacify their dozen rebel legislators and make them withdraw their resignations.

But all attempts by leaders of the allies to contact the rebel MLAs for any reconciliation failed to yield results as 10 of the rebel MLAs flew to Mumbai on Saturday evening and have since gone incommunicado.

Congress lawmaker Ananda Singh (Vijayanagara) had resigned on July 1, taking the tally of rebel MLAs to 10.

Of the Congress rebels, Somashekar and Munirathna, loyalists of Siddaramaiah, want the latter to be made chief minister again.
Both were ministers in the previous Congress government, which Siddaramaiah headed from 2013 to 2018.

The Speaker told reporters that he would look into the resignations of the rebel legislators on Tuesday, ahead of the 10-day Monsoon session of the state legislature from July 12.

The rebels have sought also an appointment with him on the same day to explain their reasons for quitting.

"A circular has been sent to their mobiles and e-mail accounts to attend the Congress Legislature Party (CLP) meeting at the Vidhan Soudha (state secretariat) in the city centre on Tuesday. They have also been asked to raise their issues at the meeting to resolve the crisis," party spokesman Ravi Gowda said.

To continue the coalition government, the allies are also planning to reshuffle the 34-member Cabinet ministry to accommodate some of the rebels by asking a few of the ministers to step down.

There are reports that all Karnataka govt ministers from the Congress party have been invited for breakfast by Deputy Chief Minister of Karnataka G Parameshwara, at his residence in Bengaluru, on Monday. There's a possibility that the Deputy CM can ask for their resignations, the sources claimed.