Kerala witnessed fresh violence over the Sabarimala issue after two women of menstruating age entered the Lord Ayyappa shrine to offer their prayers earlier this week. 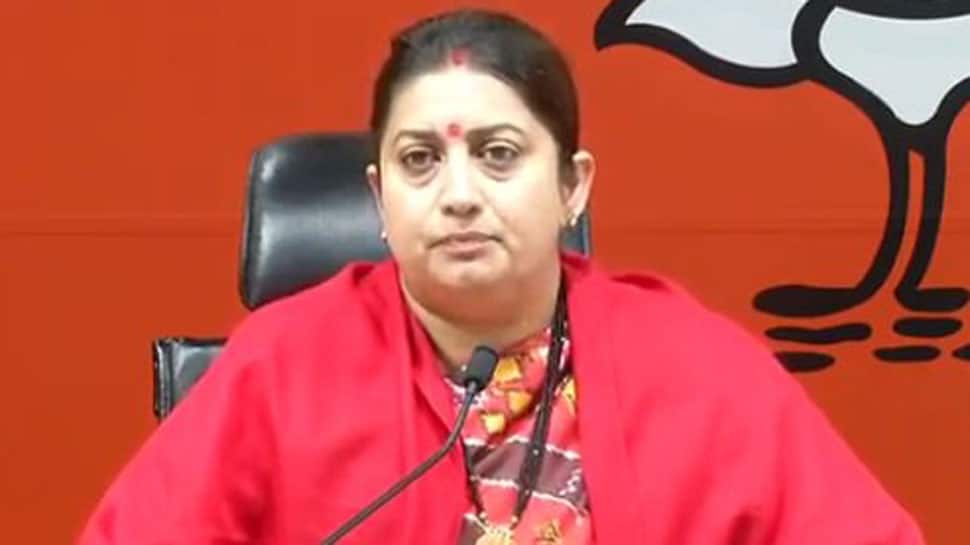 Union Minister of Textiles Smriti Irani on Sunday launched a scathing attack on the Kerala government accusing it of detaining Sabarimala temple devotees as they raised voices against the state government.

Kerala witnessed fresh violence over the Sabarimala issue after two women of menstruating age entered the Lord Ayyappa shrine to offer their prayers earlier this week.

Speaking on the violence followed by detentions and arrests of the devotees who are protesting against the entry of female devotees of menstruating age, Irani said that the social, political and law and order situation in the state has deteriorated and neither the people nor the lawmakers are safe.

She blamed that the state government has filed close to 1286 cases, 37,000 people have been made accused and more than 3,170 people were detained only for speaking against the misdeeds of the Kerala government.

"BJP condemns the dastardly attack on V Muraleedharan's residence. We will give a befitting reply but staying within the ambit of the constitution," added Irani.

Violence involving BJP-RSS and ruling CPI(M) rocked parts of Kerala, particularly Kannur district, on Saturday with several houses and shops of rival leaders and workers being attacked. Amid incidents of vandalism, Governor P Sathasivam briefed Union Home Minister Rajnath Singh about the law and order situation in the southern state.

Besides Kannur, Perambra in neighbouring Kozhikode, Malappuram and Adoor in Pathanamthitta, where the Ayyappa shrine is located, also witnessed a series of similar attacks and vandalism Friday night and in the early hours Saturday.

Bombs were hurled at several places, including at the houses of CPI(M) MLA A N Shamseer in Madapeedikayil, BJP leader and Rajya Sabha member V Muraleedharan at Vadiyil Peedikia and former Kannur district secretary of CPI(M) P Sasi at Thalassery in Kannur district past midnight, police said. No one was injured in the attacks.

As police struggled to control the situation, Chief Minister Pinarayi Vijayan lashed out at the RSS, saying the Sangh Parivar was trying to create fear in people's minds. The Opposition Congress hit out, asking why the left government failed to stop the RSS from creating trouble. In another development, a peace meeting called by the Revenue Divisional Officer at Adoor in Pathanamthitta district was boycotted by the Bharatiya Janata Party.

BJP claimed that they decided to stay away as the police failed to arrest the accused in connection with the death of Chandran Unnithan, a 'Sabarimala Karma Samiti' member who, they alleged, was killed in stone-pelting on January 3. Talking tough, Vijayan said "State will deal with the RSS violence sternly.

They are trying to destroy the peace and tranquillity of the state. We will take strong action against it. It's the RSS agenda to create fear in the minds of the people," Vijayan told reporters here, adding that it will not be allowed. He said people of the state have shown restraint. "The RSS workers were attacking houses of MLAs, and other leaders. Their only aim and route is violence. The law and order system of the state will take care of it," he said.

Senior Congress leader Ramesh Chennithala alleged the state police had failed to maintain law and order. "DGP himself has accepted this. Why has the government failed to stop the BJP from creating violence?" Chennithala asked.

Two women, Kanakadurga (44) and Bindu (42), entered the shrine and offered prayers on Wednesday, breaking a centuries-old tradition.
Following this, the tantri, Kandaru Rajeevaru, closed the sanctum sanctorum to perform the 'purification' ceremony.

In Delhi, BJP national spokesperson GVL Narasimha Rao hit out at the CPI(M) state leadership and said the violence around the hill shrine was unleashed by the LDF government, which, instead of dealing with it in a sensible way, wreaked havoc, resulting in devotees being hurt and even killed. Meanwhile, Pathanamthitta district collector has extended prohibitory orders at Sabarimala till 'Makaravilakku' festival on January 14.

As violence erupted, V Muraleedharan's ancestral home was attacked hours after bombs were thrown at the homes of Shamseer and Sasi when leaders of the Marxist party and BJP-RSS were attending a peace meeting. The attacks, which disrupted normal life, marked the return of political violence on large-scale after a gap of over a year in the sensitive district.

Kerala has been rocked by violent protests by BJP-RSS and right-wing outfits after two women of menstruating age offered prayers at the Ayyappa temple on January 2. As violence continued to disrupt life in Kannur and other places, state police chief Loknath Behera sounded a state-wide alert and gave direction to take stern action against those responsible for attacks on houses of party leaders.

According to Behara, 1286 cases have been registered till tonight and 3282 people arrested in connection with the violent incidents since the January 3 hartal called against the entry of two women into the hill temple. Of the arrested, 487 have been remanded and 2,795 granted bail. A police release said patrolling and raids had been intensified across Kannur.

Police said stone pelting incidents were reported against a march taken out by DYFI and BJP office in Kannur district this evening, but none was injured. It has been decided that no marches would be allowed to be taken out tonight and tomorrow, according to police.

In another incident, miscreants set fire to an office of the Rashtriya Swayamsevak Sangh (RSS) in Pariyaram area in the morning, police told PTI. A CPI(M) worker was attacked at Perumbara in Iritty in the district last night while RSS leader K Chandrasekharan was assaulted in Thalassery and his house ransacked allegedly by around 25 Marxist workers.

With the tension continuing, the CPI(M) and BJP-RSS leaderships blamed each other for the violent attacks. CPI(M) state secretary Kodiyeri Balakrishnan told reporters in Thiruvananthapuram that the RSS was trying to trigger riot in the state and sabotage peace talks.

The RSS-BJP combine was turning temples and educational institutions managed by them as "armoury", he alleged, adding the ruling party would take the initiative to restore peace in violence-hit areas. Countering the charges, V Muraleedharan said the incidents of violence were the tactics of the ruling CPI(M) to divert attention from the controversies and protests over the violation of the traditional customs at the Sabarimala temple.

The entry of two women into the hill shrine on Wednesday, the first time since the Supreme Court in September last year lifted the age-linked ban on the entry of women devotees, has triggered massive protests in Kerala.