Delhi Police has issued traffic advisory in view of the farmers' rally. 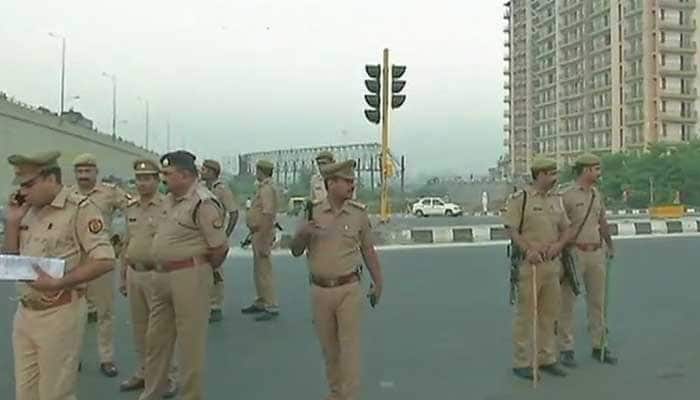 NEW DELHI: Security has been tightened at the Delhi-Uttar Pradesh border as the 'Kisan Kranti Padyatra' launched by the farmers under the banner of Bharatiya Kisan Union is expected to reach the national capital on Tuesday.

At least 70,000 farmers from Uttar Pradesh, Uttarakhand, Punjab and Haryana are staging the Kisan Kranti Padyatra, which will conclude at the Rajghat.

The farmers are protesting against the unfriendly policies of the Narendra Modi Government and want to remind it of its promises made to the farmers.

Farmers participating in the movement are demanding complete loan waiver and reduction in electricity tariff, among other requirements. They are also seeking a provision of a pension to every farmer aged above 60.

According to ANI, security has been tightened at the Delhi-UP border in wake of 'Kisan Kranti Padyatra'.

The Delhi Police had on Monday imposed prohibitory orders in east and northeast Delhi, anticipating law and order problems in view of the farmers' rally.

In east Delhi, the prohibitory orders were issued by Deputy Commissioner of Police (East) Pankaj Singh under Section 144 of the Criminal Procedure Code which would be in force until October 8.

In northeast Delhi, the prohibitory orders were issued by Deputy Commissioner of Police (Northeast) Atul Kumar Thakur and will be in force till October 4.

The Delhi Police is also in touch with its counterpart in Uttar Pradesh to ensure that the protesting farmers do not enter Delhi.

A senior police official claimed that the farmers have not sought any permission from the Delhi Police for the protests.

The order prohibits assembly of five or more people and holding of any public meeting. It also prohibits the usage of any amplifier, loudspeaker, and similar instruments.

According to the orders, police have received information that BKU president Rakesh Tikait, along with a large number of protestors, will reach the national capital on Tuesday.

The march is being organised from Patanjali (Uttarakhand) to Kisan Ghat (Delhi) via Muzaffarnagar, Daurala, Partapur, Modi Nagar, Muradnagar, Hindon Ghat between September 23 to October 2.

The rally will pass through Ghaziabad (in Uttar Pradesh) and will proceed via Preet Vihar and Geeta Colony flyover in east Delhi on Tuesday.

The protesters are proceeding towards Delhi with hundreds of tractor-trolleys and private vehicles, according to the order issued by the DCP (East).

They may also be carrying sticks, lathis, cans and possibility of them turning unruly cannot be ruled out on sthe lightest provocation, it said.

"The yatra, thus has pthe otential of disruption of traffic and creating law and order problems. Hence, it is essential to maintain law and order and peace in the national capital territory of Delhi with intent to avoid any inconvenience to the general public," the order said.

There are also instructions against carrying firearms, stones and corrosive substances.

The protestors are marching towards the national capital with their several demands including farm loan-waiver.

Section 144 of the CrPC of 1973 empowers an executive magistrate to prohibit an assembly of more than four people in an area.

The Delhi Traffic Police has also issued an advisory asking motorists to avoid the Meerut Expressway.

"In view of the large scale gathering of protestors on the Ghazipur border, the motorists going towards Ghaziabad, Hapur, Meerut, Muzaffarnagar, Roorkee, Haridwar are advised to avoid the Meerut Expressway (Ghazipur Border) and take alternative routes as per their convenience," the advisory said.

Those going towards Ghaziabad can take Ghazipur Chowk, Road No 56 towards ISBT Anand Vihar, Apsara Border, GT Road and Mohan Nagar, it said.