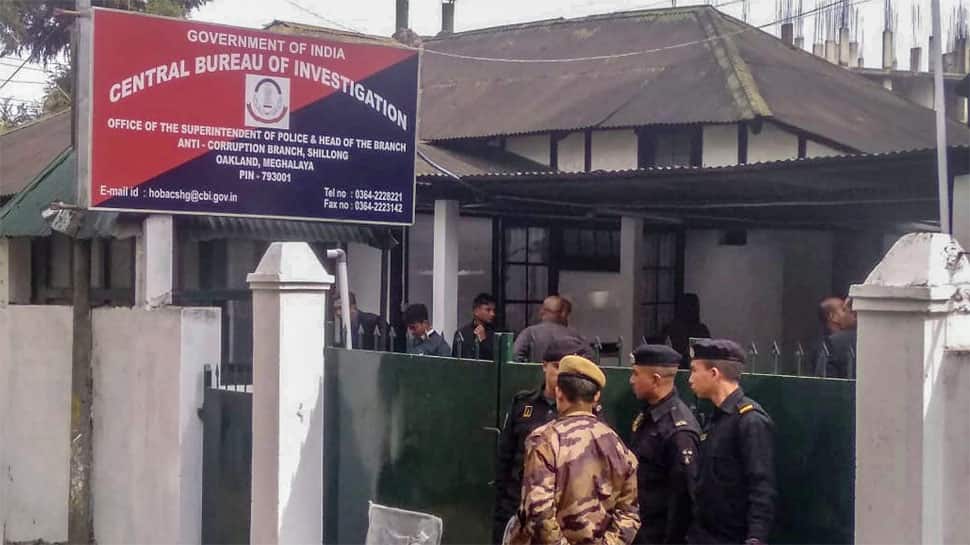 Tight security arrangments made outside the CBI office where Kolkata Police Commissioner Rajeev Kumar is being questioned in connection with chit fund case, in Shillong, Saturday, Feb 9, 2019. (PTI Photo)
Share:
Written By:

SHILLONG: The marathon questioning session of Kolkata Police Commissioner Rajeev Kumar in connection with the Rose Valley and Saradha chit fund scam by a CBI team concluded on Saturday night. The interrogation began at 11 am this morning at the highly secured CBI office at Oakland in Shillong as per the directions of the Supreme Court.

Sources told Zee News that Kumar has been asked to appear before the agency for questioning again on Sunday.

The probe agency has prepared a 22-page questionnaire in three sets for interrogation. It is also likely to present vital evidence against Kumar in front of the Supreme Court, top sources told Zee News.

One of the inputs proves that the West Bengal government failed to hand over mobile phones and laptops seized during the arrest of chit fund scam kingpin Sudipta Sen and his accomplice Debjani Mukherjee to CBI despite several requests. These electronic pieces of evidence are also yet to be sent for the forensic exam.

Kumar also manipulated the call detail records (CDR) of Sen and Mukherjee. Over 50 important phone calls from influential persons were made before Sen's arrest, some of which are now missing.

One of the calls is from former Trinamool Congress MP Kunal Ghosh, who gave 14 statements to Rajeev Kumar and Arnab Ghosh, who served as the DC DD of Bidhannagar Police Commisionarate when Saradha Chit fund case came to the limelight.

The original CDR is different from the manipulated CDR and the probe agency has over 164 documented evidence to prove this, added the source.

Kumar was reportedly summoned three times to answer these queries. However, he replied just once indicating non-cooperation and avoiding CBI interrogations, said the probe agency.

Meanwhile, in Shillong, Kumar requested the presence of his legal advisor during interrogation. He also sought an early finish of the interrogation due to Saraswati Puja and Board exams which begins on February 12.

The Supreme Court had on Tuesday directed the Kolkata Police chief to appear before the CBI and "faithfully" cooperate in the investigation of cases arising out of the Saradha chit fund scam.

It chose Shillong as the neutral meeting place "to avoid all unnecessary controversy", while making it clear that Kumar will not be arrested.

On February 3, a team of CBI officials had gone to Kumar's residence in Kolkata to question him, but their attempt was thwarted by the police, following which Banerjee had staged a three-day sit-in.