The 225 feet long and 150 feet wide flag was unveiled on the 152nd birth anniversary of Mahatma Gandhi by the Ladakh L-G, RK Mathur 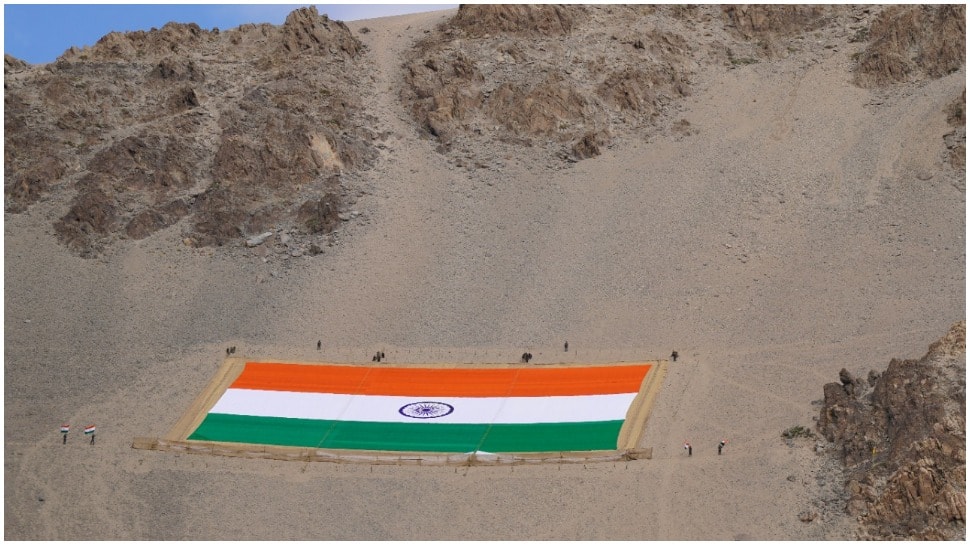 Leh: Lieutenant Governor of Ladakh, RK Mathur, on Saturday (October 2) inaugurated in the Union territory a national flag made up of Khadi cloth, the largest such national flag in the world.

The unveiling of the flag took place on a day when the country is observing the birth anniversary of the "Father of the Nation," Mahatma Gandhi, with whom Khadi is synonymous.

@lg_ladakh unveiled the Monumental #NationalFlag created by @kvicindia at an event organised by @firefurycorps, Ladakh.
"KVIC has created the largest symbol of patriotism for the people of the country" LG.

37.5k sq ft flag with1000 kgs is the largest National Flag made of Khadi pic.twitter.com/QB7qhaxR9H

The 225 feet long and 150 feet wide flag that weighs over 1,400 kg was unveiled on the birth anniversary of Mahatma Gandhi. Army chief General Manoj Mukund Naravane was also present during the unveiling.

"This national flag is the world`s largest flag made of Khadi. Its length is 225 ft, width 150 ft, and weighs 1400 kg. The flag covers a 37,500 sq ft area. It took 49 days to complete this flag," said Vinai Kumar Saxena, Chairman, Khadi and Village Industries Commission.