Let's put humans at centre of our vision for global prosperity: PM Narendra Modi at G20 meet on coronavirus 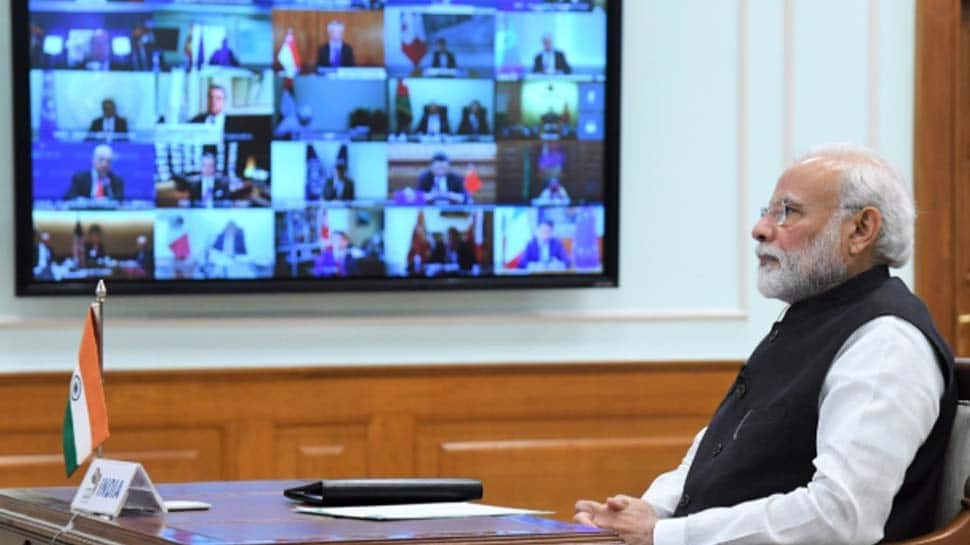 Prime Minister Narendra Modi on Thursday pitched for 'humans at centre' vision to the global leaders at the G20 virtual summit on the COVID-19 pandemic hosted by Saudi Arabia, which holds the G20 presidency in 2020. "Let's put human beings rather than economic targets at centre of our vision for global prosperity, cooperation," said PM Modi.

At the G20 summit, PM Modi pushed for developing more adaptive, responsive, and affordable human healthcare system to be deployed globally. He stated that 90 per cent of COVID-19 cases and 88 per cent of coronavirus deaths took place in G20 countries

PM Modi called for sharing freely and openly medical research for the development of humankind. He highlighted that international organisations like the World Health Organisation (WHO) needs to be strengthened and reformed. "WHO initially did not have the mandate to deal with the pandemic of this sort, which is why empowering of WHO is necessary be it in terms of its capacity of early warning or development of effective vaccines, or capacity building," said PM Modi.

The PM said at many levels, globalization has failed us, whether it is in combating terrorism or climate change. He also offered an opportunity to look at a new concept of globalization--one that also focuses on humanity, climate change, and terrorism other than economic and financial aspects.

"Thousands of precious lives have been lost and equally alarming is its economic and social costs," he said at the G20 summit. PM Modi stressed the need to build early warning systems, to deal with future pandemics.

UN chief Antonio Guterres has warned that the world is not winning the war against the deadly novel Coronavirus and needs a war-time plan to fight it as the number of infected cases across the world grow exponentially every day. The UN Secretary-General was speaking at the G20 Virtual Summit.

"We are at war with a virus and not winning it. It took the world three months to reach 100,000 confirmed cases of infection. The next 100,000 happened in just 12 days. The third took four days. The fourth, just one and a half. This is exponential growth and only the tip of the iceberg. This war needs a war-time plan to fight it," Guterres said.