Junior doctors in West Bengal are on strike since June 11 after two of their colleagues were attacked and seriously injured allegedly by relatives of a patient who died at the NRS Medical College and Hospital in Kolkata. 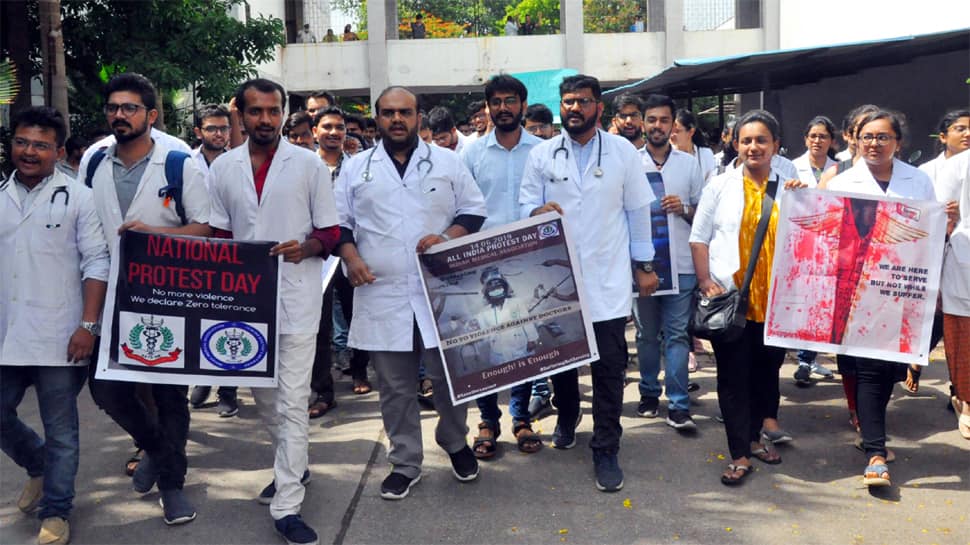 The protesting doctors in West Bengal called off their week-long strike after meeting with Chief Minister Mamata Banerjee on Monday afternoon. The junior doctors were on strike since June 11 after two of their colleagues were attacked and seriously injured allegedly by relatives of a patient who died at the NRS Medical College and Hospital in Kolkata.

Thank you for following the live updates today. For more latest news and updates, visit here.

# State governor Keshari Nath Tripathi welcomed the resolution of crisis caused by the state-wide strike of doctors. "The Governor is happy that amicable settlement has been arrived at the meeting held today between the Chief Minister and Doctors. He appreciates the initiative taken by the Chief Minister and also the Junior Doctors to resolve the impasse. He hopes that the Doctors will take up the work of care and treatment of patients as per the high ideals of their noble profession and also that the State Government will take all the steps committed in the meeting expeditiously," he said in a statement.

# Junior doctors announce the end of the strike at NRS Medical College. They'll resume work tomorrow morning at 6:30 am.

# West Bengal CM on her way to meet Paribaha Mukherjee, the junior doctor assaulted by a mob at NRS Hospital and Medical College.

"Currently, I am going to meet the Paribaha Mujherjee in Neuro Science," said Mamata.

# "We will go to NRS and then announce our withdrawal. We are satisfied," say doctors.

# Junior doctors ask CM to visit the assaulted doctor. "Leave that for me to decide when I’ll go and when not," says Mamata.

# "Mamata asks officers to set up grievance cell at all hospitals in three languages - Hindi, English and Bengali. It should be visible during the night too. If any patients party have a complaint, they may go to this cell without resorting to violence," Mamata directs

# Emphasis should be given on night time security: Mamata

# One officer from police should be made the nodal officer responsible for all hospitals: Mamata

#"We had police forces posted in hospitals but now we need to streamline the entry of patient party in the hospital, hence we can minimise the chance of eventualities," says Kolkata Police Commissioner, Anuj Sharma.

# "Please ensure that the news of demise or update be communicated via proper channel and in a most humble manner," Mamata directs Rajiv Sinha. "See if a third person can be involved who can abosrb the information from the doctors and pass it to patient party. That would minimise extra pressure on doctors as well."

# "Will try to ensure that more than two people doesn't enter the emergency ward at a time to avoid chaotic situation," says Mamata.

# "The details of action taken are available. Kolkata Police will also help with the names of the accused persons," says Rajiv Sinha.

# "We are often made to work in an environment of fear. We request humbly, please ensure exemplary punishment against culprits, hence you are our guardian.  We came here for discussion because we want a solution and end the deadlock and resume services. We believe that you have all good intentions if possible please take appropriate action against the unwanted incidents that have taken place," doctors' delegation to Mamata.

# No doctor has been booked by state government, says Banerjee at meeting with protesting junior doctors: PTI

# Junior doctors apprise Banerjee of the problems they have been facing at medical colleges and hospitals.

# Chief Minister Mamata Banerjee arrives for meeting with representatives of doctors at Nabanna.

# As many as two medical representatives from 14 colleges (28 persons) will meet the chief minister to end the impasse. The meeting will also be attended by Chief Secretary, additional and principal secretary health and Director, Medical Education.

# Team of doctors from NRS Hospital have reached the state Secretariat Nabbana. The team of 31 representatives arrived in a bus.

# Doctors strike has paralysed medical and health services in Bihar, where an intense heat wave and acute encephalitis syndrome (AES) has claimed several lives. Long queues of hapless patients were seen at PMCH in Patna, the largest hospital in the state, as services at OPDs remained completely suspended, though hospital sources said that emergency services have not been allowed to be affected

# Chief Minister Mamata Banerjee on Monday agreed to meet two representatives from each Medical College of West Bengal at 3 pm on Monday. The discussion will focus on the demands of the doctors. As many as two medical representatives from 14 colleges (28 persons) are to attend the meeting to end the impasse. Chief secretary, additional and principal secretary health and Director, Medical Education will also be present for the meeting. However, the doctors are holding a general body meeting to decide whether they will go or not and if at all they go, which two representatives will attend the meeting.

# Lucknow: With over 10,000 doctors on strike, health care services in Lucknow were crippled on Monday. The resident doctors of King George's Medical University (KGMU) and Queen Mary`s hospital, Sanjay Gandhi Post Graduate Institute of Medical Sciences (SGPGIMS) and Dr Ram Manohar Lohia Institute of Medical Sciences (RMLIMS) proceeded on strike at 6 am and will stay off work till Tuesday 6 am.  Emergency and trauma services remained functional but the out-patient-department (OPD) services and elective surgeries were postponed.

# Delhi: The doctors at the Centre-run Safdarjung Hospital, Lady Hardinge Medical College and Hospital, RML Hospital, as well as Delhi government facilities such as GTB Hospital, Dr Baba Saheb Ambedkar Hospital, Sanjay Gandhi Memorial Hospital and Deen Dayal Upadhyay Hospital will be joining the strike. Emergency and casualty services will continue to function at these hospitals.

# Resident Doctors' Association of All India Institute of Medical Sciences (AIIMS) will go on strike from 12 noon today till 6 am tomorrow, in support of doctors strike over violence against them in West Bengal. Emergency services including Casualty, ICU and Labour room to be continued.

# The Indian Medical Association (IMA) had given the strike call with the withdrawal of non-essential health services across the country. IMA members will also stage a dharna at its headquarters in Delhi. The apex medical body, IMA, has demanded a comprehensive central law in dealing with violence on doctors and healthcare staff. Security measures and the determinants leading to violence should also be addressed, it said in a statement. IMA has launched a four-day nationwide protest from Friday and wrote to Home Minister Amit Shah demanding enactment of the central law to check violence against healthcare workers.

Gujarat: Indian Medical Association today has called for a nationwide strike of doctors in the wake of violence against doctors in West Bengal; Doctors at Sir Sayajirao General Hospital in Vadodara hold protest outside Out Patient Department pic.twitter.com/Ya6NS3CE3x

# Kerala: While medicos from the private sector opted for a day-long strike with just the casualty services to be made available; those in the government sector would remain off duty for two hours from all out-patient services from 8 am to 10 am. At the state-run Medical Colleges, teachers would be on strike for an hour from 10 am to 11 am. All private clinics including dental clinics have also been asked to down their shutters for the day.