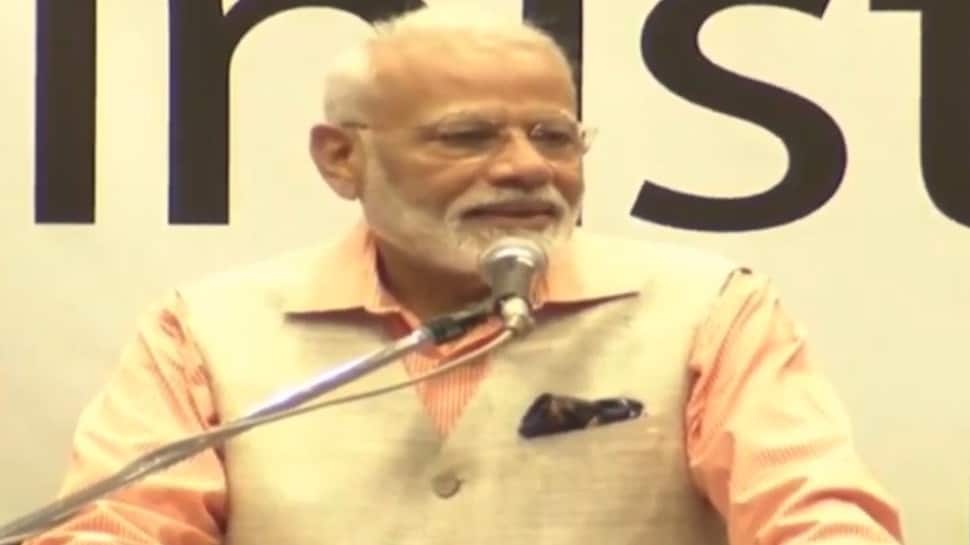 Prime Minister Narendra Modi Thursday landed in Japan's Osaka to the attend the G20 Summit on Thursday morning. He will attend several bilateral and plurilateral meetings and meet with world leaders including US President Donald Trump and Russian President Vladimir Putin. He was greeted by the members of the Indian community in Japan.

Here are the live updates from the G20 Summit:

It was often said that 'Sky is the limit' which was fine in earlier times. But India is ahead of this limit and is seriously exploring the space: PM Modi

This is my fourth trip to Japan as Prime Minister. During the visits, I've experienced an affinity towards the Indians in Japan. Taking pride in our civilization and values, making talent and technology a part of nation building, these I have experienced in Japan: PM Modi

Digital Literacy is growing very fast today. Digital transactions are at record level, a huge infrastructure is being prepared for innovation and incubation. On this, we aim to create 50 thousand startup eco systems India in the next 5 years: PM Modi

I got the privilege of taking PM Abe to Delhi, Ahmedabad and Varanasi. PM Abe joined the Ganga Arti in Kashi, one of my parliamentary regions, and one of the world's oldest cultural and spiritual cities. These pictures have settled in the mind of every Indian: PM Modi

When it comes to India's relations with the world, Japan holds an important position. These relations are not from today but dates back to centuries. It has harmony and respect for each other's culture in its foundation: PM Modi

One of Mahatma Gandhi's teachings from childhood we have heard and learned is 'Don't see the evil, don't listen to the evil and don't speak the evil'. Every child knows it but very few people know that Gandhi's choice for the three monkeys, who have been chosen this message, had their birth in Japan: PM Modi

This mandate has been given to meet the expectations and aspirations of New India which will give new vigour and energy to our relationships with the other nations: PM Modi

Our motto was 'Sabka Saath Sabka Vikas' and the people added the nectar of 'Sabka Vishwas'. We are going ahead with this motton. India will be made even stronger: PM Modi

130 Crore Indians formed an even stronger govt. This is big. After three decades, for the first time, a govt with clear majority formed govt for the second time in a row: PM Modi

India has showered this Pradhan Sevak with greater love and affection than ever before. I know that many of you have contributed immensely to this public mandate: PM Modi

I'm fortunate to be here once again after 7 months. It's a coincidence that last time I was here, election results were out here and you had shown trust in my dear friend Shinzo Abe. Today when I'm here, largest democracy has shown even greater trust in this 'Pradhan Sevak': PM Modi

The 2019 Lok Sabha election result was the win of democracy and truth, not only of me: PM Modi

"A friendship characterised by warmth and the promise of a bright future. Prime Ministers @narendramodi and @AbeShinzo hold talks in Osaka, the first such meeting between these leaders since the start of Japan’s Reiwa era. Many aspects of India-Japan relations were discussed," tweets the Prime Minister of India office.

A friendship characterised by warmth and the promise of a bright future.

Prime Ministers @narendramodi and @AbeShinzo hold talks in Osaka, the first such meeting between these leaders since the start of Japan’s Reiwa era.

Many aspects of India-Japan relations were discussed. pic.twitter.com/59CiuBHZWA

There was a brief discussion on Mumbai-Ahmedabad high-speed railway as well as the convention centre in Varanasi. Both leaders held review of progress in this regard: Gokhale

Both PMs would meet again tomorrow for a trilateral meeting between Japan, India and the US. There was a brief discussion on the Indo-Pacific initiative that all three countries are separately pursuing and discussing together: Foreign Secretary

PM Abe referred specifically to PM Modi's initiative in earlier G20 meetings on the issue of fugitive economic offenders and he said that G20 should deal with this problem as part of its anti-corruption measures: Foreign Secretary Vijay Gokhale

Both of them agreed that a number of meetings would take place but most important would be the first 2+2 ministerial meeting: Foreign Secretary Vijay Gokhale

It was a very warm meeting, both leaders are old friends. They had a very constructive and detailed discussion on the bilateral relationship: Foreign Secretary Vijay Gokhale on PM Modi-Japan PM Shinzo Abe meeting

PM Modi will hold bilateral meetings with US President Donald Trump and Saudi Crown Prince Mohammad Bin Salman Al Saud on Friday. He will also attend the BRICS informal meet to be held ahead of the G20 Summit. Later, the Prime Minister will hold talks with German Chancellor Angela Merkel, World Bank Group President Jim Yong Kim, Prime Ministers of South Korea, Thailand, and Vietnam. He will also attend a RIC (Russia-India-China) meet. He will also meet United Nations Secretary-General António Guterres and attend a cultural event on the sidelines of the G20 Summit.

"Once again would like to offer my hearty congratulations to you for an overwhelming win in elections. Also, next time it is my turn to visit India and I am looking forward to my visit," said Shinzo Abe.

"Thank you once again for the congratulations, you were the first friend of India who congratulated me, on phone. I also express my gratitude for the warm welcome you and Japan Government have accorded to us," PM Modi tells PM Abe.

"Expanding the strategic template of our relationship. PM @narendramodi met Japanese PM @AbeShinzo ahead of the #G20Summit. Discussed broad range of topics of mutual interest. PM said that he was looking forward to visit of PM Abe to India later this year for the Annual Summit," tweeted Kumar

Expanding the strategic template of our relationship
​
PM @narendramodi met Japanese PM @AbeShinzo ahead of the #G20Summit. Discussed broad range of topics of mutual interest. PM said that he was looking forward to visit of PM Abe to India later this year for the Annual Summit. pic.twitter.com/q07u4i68yu

Greeting each other as best friends do!

He was greeted by the members of the Indian community in Japan.

Grateful to the dynamic Indian community for the warm welcome! pic.twitter.com/BrPkl9VJqJ

Prime Minister Narendra Modi Thursday landed in Japan's Osaka to attend the G20 Summit alongside key international leaders. He will attend several plurilateral meetings and meet world leaders including US President Donald Trump and Russian President Vladimir Putin. The Prime Minister left India on Wednesday night and arrived in Osaka early Thursday morning. Taking to Twitter, he wrote, “Early morning arrival in Osaka. The #G20 Summit, bilateral and multilateral interactions await PM @narendramodi in the coming two days. He will elaborate on many issues of global importance and present India’s viewpoint.” This is PM Modi's sixth G20 Summit which is being held at Osaka on June 28-29.