Time for a decisive war against those supporting terrorism: PM Modi

PM Narendra Modi and US President Donald Trump on Sunday addressed around 50,000 Indian-Americans at NRG stadium in US' Houston. The organisers of the 'Howdy, Modi' event - the Texas India Forum - have billed it as the largest-ever gathering for a foreign elected leader on the US soil. 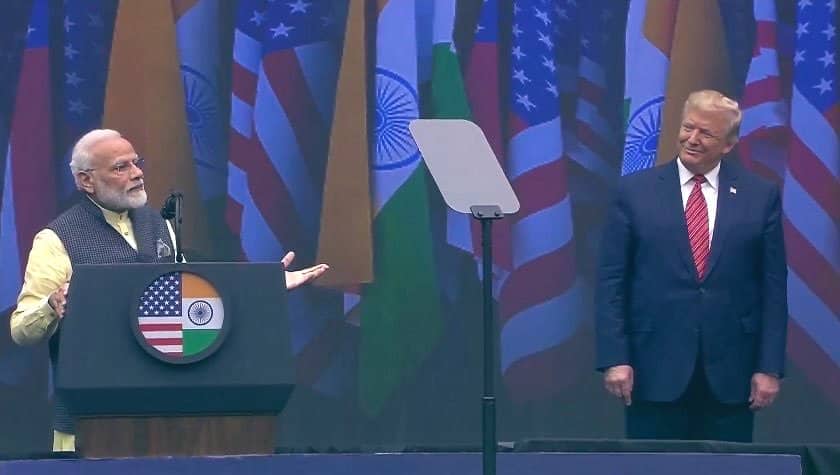 HOUSTON:  PM Narendra Modi and US President Donald Trump on Sunday addressed around 50,000 Indian-Americans at NRG stadium in US' Houston. The organisers of the 'Howdy, Modi' event - the Texas India Forum - have billed it as the largest-ever gathering for a foreign elected leader on the US soil.

Shortly after landing here, PM Modi met the top CEOs of the energy sector in the US with a focus on working together for energy security and expanding mutual investment opportunities between India and the US. The PM also met members of the Sikh community who handed him a memorandum. Further, PM Modi also met a delegation of Kashmiri Pandits, who voiced support for the "steps being taken" in India.

During his visit, PM Modi will be honoured with the prestigious ‘Global Goalkeeper Award’ 2019 by the Bill and Melinda Gates Foundation for his dynamic leadership and commitment to the Swachch Bharat Abhiyaan.

The Howdy, Modi event will begin 8:30 PM (Indian Standard Time) and continue until 11:30 PM on Sunday. Later, PM Modi would attend a community reception at the NRG Centre after a luncheon meeting with the elected officials of NRG.

PM Modi will also unveil a plaque for a ceremony at the Eternal Gandhi Museum besides inaugurating the Gujarat Samaj of Houston Event Centre and the Siddhi Vinayak Temple in Houston. He will emplane for New York around 3 AM (IST) and arrive at the JFK International Airport around 4.45 AM (IST).

Here are the highlights of Howdy, Modi event:-

Mr President Trump, I want you to come to India, with your family. Our friendship will take our shared dreams and our vibrant future to new heights: PM Modi as he concludes his address in NGR Stadium in US' Houston.

PM Modi concludes his speech amid a huge round of applause from Indian-Americans at NGR Stadium in Houston.

We are investing Rs 100 lakh crore on public infrastructure. In the last five years, the world, amidst all uncertainties, India's growth rate has been 7.5%. This is the best average of any govt in India's entire history: PM Modi.

India has started preparing and working to become a $5 Trillion economy. We are working on bettering infrastructure, investment & export. We are building a people-friendly, development-friendly and investment-friendly atmosphere in India: PM Modi

India, today, isn't postponing challenges, it is fighting it head-on. India isn't working on small incremental changes, but on complete solutions. We are realizing the impossible: PM Modi.

9/11 in the US or the Mumbai attacks in India, the brainchild is always found in the same place. It is high time we fight a decisive battle against the perpetrators and supporters of terrorism: PM Modi.

Some people, who can't control their country, are having problems with what is going on in India. Their politics is hatred towards India and cultivate terrorism. You and the entire world knows who they are: PM Modi says in an apparent jibe at Pakistan.

I request you to give a standing ovation to the lawmakers of India, urges PM Modi.

Now, according to the Constitution of India the rights which are given to the rest of the Indians, those rights have now been given to the people of Jammu and Kashmir and Ladakh. Discrimination against women, children, and Dalits has been put to an end there: PM Modi.

We are building a transparent ecosystem to ensure the benefits of progress reaches every Indian. We don't want any Indian to stay away from progress and development: PM Modi.

We have also eliminated over 8 crore fake names, that had only existed on paper and were earning the government's benefits. We have saved about 1.5 lakh crore money by just this elimination: PM Modi.

We are also challenging corruption. We are giving it farewell at different levels already. In the last 2-3 years, India has bid goodbye to over 3.5 lakh suspicious companies: PM Modi.

India bid farewell to 70-year-old Article 370 which had deprived the people of Jammu and Kashmir and Ladakh of the benefits of development, says PM Modi in Houston.

India has already bid farewell to over 1,500 redundant laws in the last five years. The complicated tax network has been diluted and GST has been introduced. We have made the One Nation, One Tax dream come true: PM Modi.

We have given equal priority to welfare and farewell. On the 150th birth anniversary of Mahatma Gandhi on this October 2, India will bid goodbye to open defecation: PM Modi.

Filing tax returns and tax returns were a headache at one point in time. This year, on August 31, five million people have filed their income tax return online. The tax refunds that took months are now getting transferred to the bank accounts in a matter of days: PM Modi.

There are about 10,000 services from Central and State Govts online. It took months, in the past, to make a passport. These days, it just takes a few days: PM Modi.

Ease of Doing Business and Ease of Living is equally important to us. Employment is key to this. The economic development will be swift if the country's youth has employment: PM Modi.

In the last five years, 130 crore Indians have achieved things which on one could have even imagined, says PM

The formation of New India is India's biggest oath at the moment. The nation is working very hard to realize the dream. We are competing with ourselves, challenging ourselves and changing ourselves: PM Modi.

Today, India wants to grow at a faster speed than ever before. It is challenging the people who think nothing is going to change, ever. In the last 5 years, 130 crore Indians have brought unprecedented results in different sectors: PM Modi

Today India is challenging the mindset of some people who believe that - nothing can change, says PM Modi.

The 2019 Lok Sabha elections waved the flag of Indian democracy throughout the world. 61 crore people participated in it. This is approximately double the total population of the US: PM Modi

India is not in competition with any country. It is competing with itself. We are aiming high, and he achieve higher, says PM Modi.

This is a great salute to 1.3 billion Indians, says PM

President Trump coming here, different representatives - Democrats and Republicans - and saying so much for me, wishing me it is the salute of Indians living in US, says PM

After six decades, a party was successful in forming the government with full majority. We came back for the second term with more number of seats than the last time, says PM Modi.

This was possible not because of Modi, but you all Indians, adds PM.

Our languages are a great representation of our liberal and democratic society. For centuries, thousands of languages have peacefully co-existed in India: PM Modi

Everything is good in India, says PM Modi. He goes on to repeat the same in different languages of India, resonating the rich diversity and culture of India.

The event's name is Howdy, Modi. But I am nothing without the 1.3 billion people of India. I am an ordinary man acting on their mandate, says PM Modi.

I thank the organisers of the event for helming an event at such a gigantic scale, says PM Modi.

PM Modi starts his speech this time in Hindi by saying "Howdy, my friends".

This scene, this atmosphere, this is unimaginable. When it comes to Texas, everything is grand and big. It's in Texas' fabric. The spirit of Texas is being reflected here: PM Modi.

Today, we honour all of the brave American and Indian military service members who work together to safeguard our freedom. We are committed to protecting innocent civilians from the threat of radical Islamic terrorism, says Donald Trump at Howdy, Modi event.

Very soon India will have to access to another world-class American product-NBA basketball. Wow, sounds good. Next week thousands in Mumbai will watch the first-ever NBA game in India..am I invited Mr Prime Minister? I may come, be careful I may come, says President Trump.

We are committed to ensuring Indians have access to the world's best products, says Trump.

We will save the world from extreme Islamic terrorist outfits spread across the globe, says President Trump.

Look forward to working with you to make our nations more prosperous than ever, says Trump. India has never invested in the US like it is doing today, says Prez Trump

"Indian Americans, you enrich our culture, you uplift our values, we are proud to have as Americans," Trump says.

Indian steel manufacturing companies will enter Ohio soon. Together with Modi, we will make America stronger than ever, says Trump.

My administration fights for you every day," says Donald Trump.

As a result of PM Modi's pro-growth policies, India has lifted nearly 300 million out of poverty, and that is an incredible number, says Donald Trump.