Home Minister Amit Shah will participate in the celebrations from Haryana's Rohtak and Defence Minister Rajnath Singh will participate from the national capital. Senior BJP leaders will also attend over 40 major Yoga Day events across the country. Delhi alone will host over 300 yoga sessions which is likely to see the participation of over 10 lakh. Union Finance minister Nirmala Sitharaman and East Delhi MP Gautam Gambhir will attend a yoga session at the Yamuna Sports Complex in Shahdara.

On International Day of Yoga best wishes to all practitioners of yoga across the world. Yoga is India's gift to humanity; it holds the key to healthy living and to that fine balance between mind and body. Do become a part of the celebration of yoga: President Ram Nath Kovind

On #InternationalDayofYoga best wishes to all practitioners of yoga across the world. Yoga is India's gift to humanity; it holds the key to healthy living and to that fine balance between mind and body. Do become a part of the celebration of yoga #PresidentKovind pic.twitter.com/5ecObY4dC1 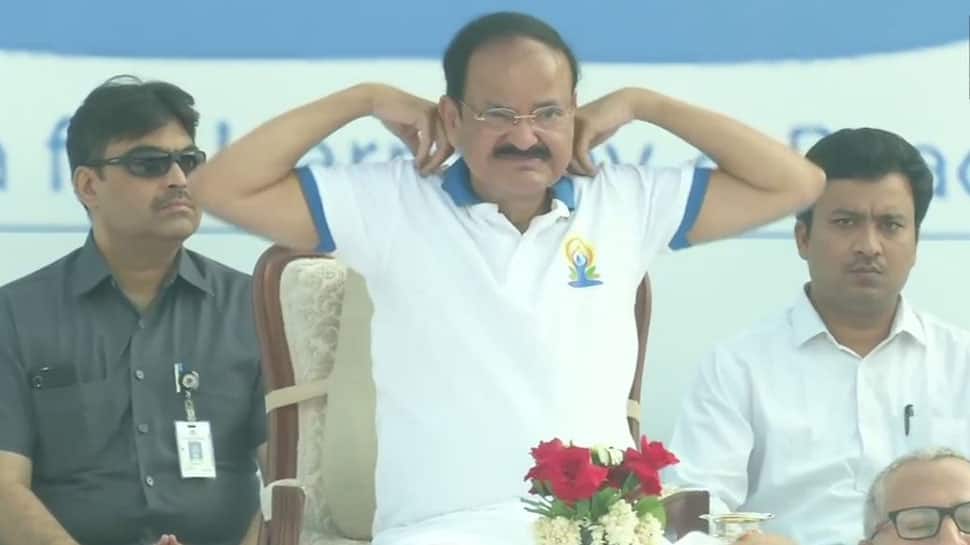 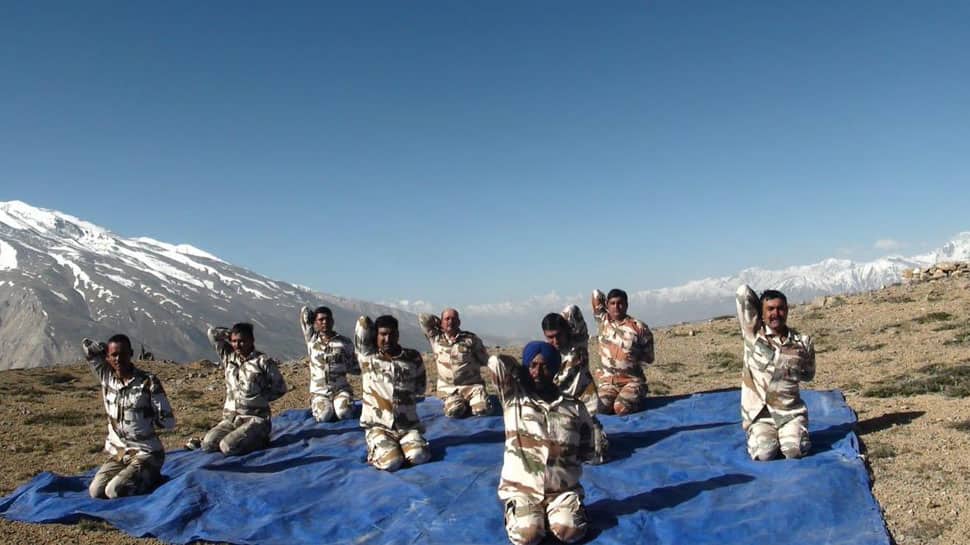 Kerala CM Pinarayi Vijayan at a yoga event in Trivandrum said, "Lifestyle diseases are affecting us. Yoga is providing us all kind of exercises for our body. Anyone can practice yoga; everyone irrespective of religion and caste should practice this. Some people are deliberately trying to mislead others regarding yoga. As if this is something religious, some people have even made such remarks. In fact, none of the postures being performed as part of yoga has any connection with any religion." 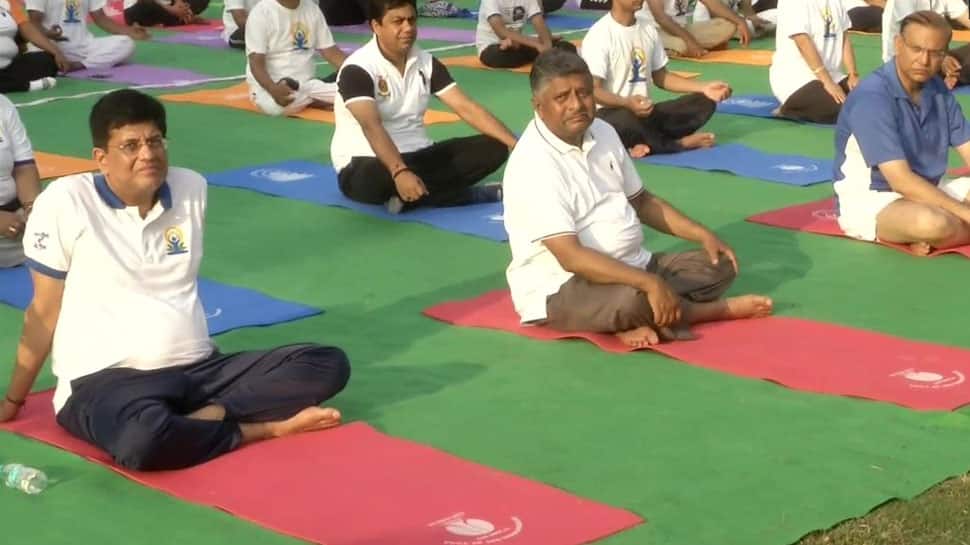 French Ambassador to India, Alexandre Ziegler, said, "We had more than 100 yoga practitioners this morning. We have yoga lessons almost every day at the Embassy. Yoga is becoming popular among the French people now. It helps to stay fit both physically and mentally." 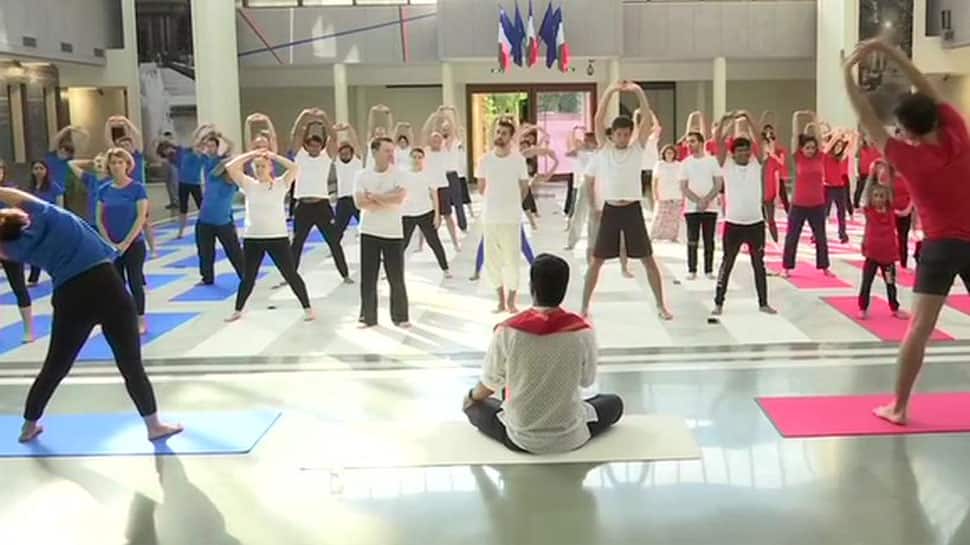 I wish your state govt also celebrated yoga day so that in Kerala you can have peace. Today people of Kerala are forced to go on the streets to save their tradition: BJP National General Secretary, Ram Madhav, in Trivandrum

Taking a jibe at the Kerala government, he said, "For them, every tradition in this country is to be dismissed, hated, whether it is Sabarimala or Yoga, they hate it. India is based on a tradition and they hate it. We gave a new mantra to the world for peace. This tradition is going to save the world.

After Narendra Modi became PM, we realised the value of ancient wisdom. This should have been done after independence: BJP National General Secretary, Ram Madhav, in Trivandrum 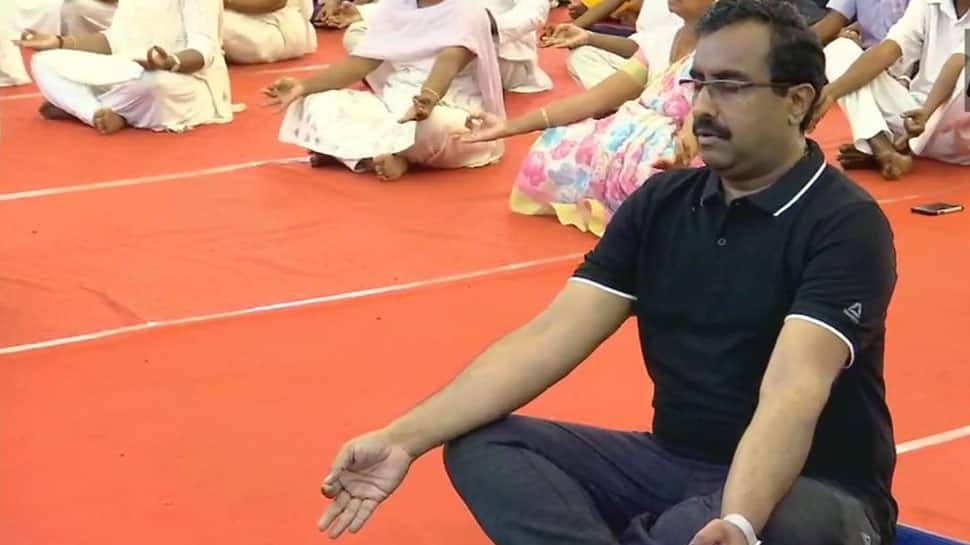 Yoga is a practice that teaches world how to control ourselves. Yoga is not only for balancing the body, its also about the balance of mind. PM gave a call to the world, 'Come let us practice yoga' so that we can overcome all conflicts and the world will be a beautiful place: BJP National General Secretary, Ram Madhav, in Trivandrum 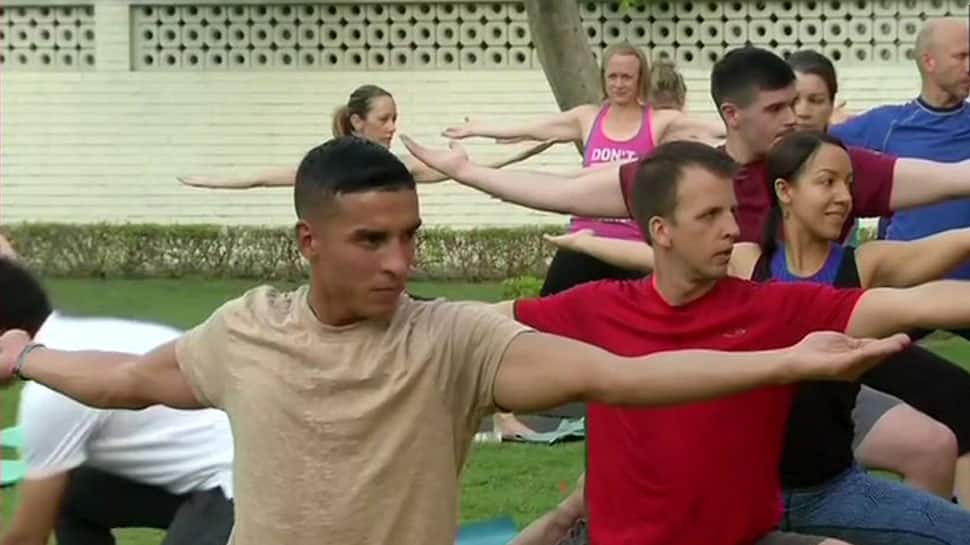 Union Transport Minister Nitin Gadkari led an event in Nagpur with several thousand doing various yoga exercises with him. He said that it is wonderful that yoga is getting recognition from the whole world. He added that yoga is a symbol of India's rich culture and history. 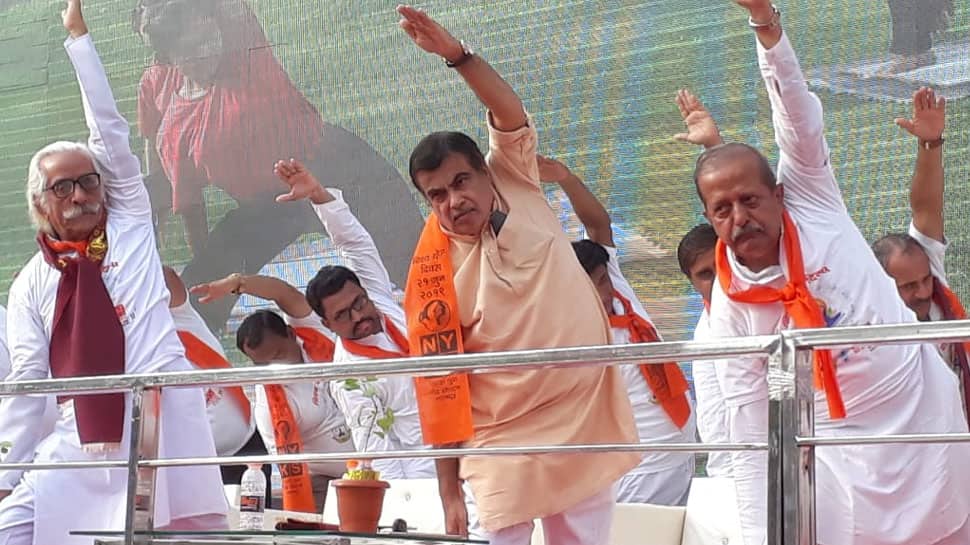 WATCH: Dog squad of Border Security Force (BSF) performs yoga along with their trainers in Jammu.

#WATCH Dog squad of Border Security Force performs yoga along with their trainers on #YogaDay2019 in Jammu. pic.twitter.com/TTN2vAgbeS

At the United Nations, Indian envoy Syed Akbaruddin and Deputy Nagaraj Naidu lead the charge. Yoga was celebrated with the theme Yoga for climate change. Syed Akbaruddin said, "The UN has a special place in the remarkable growth of Yoga in our lifetimes. It was here that an ancient practice was transformed into an annual global observance. Hence we always observe the occasion with zest and fervour at the UN." 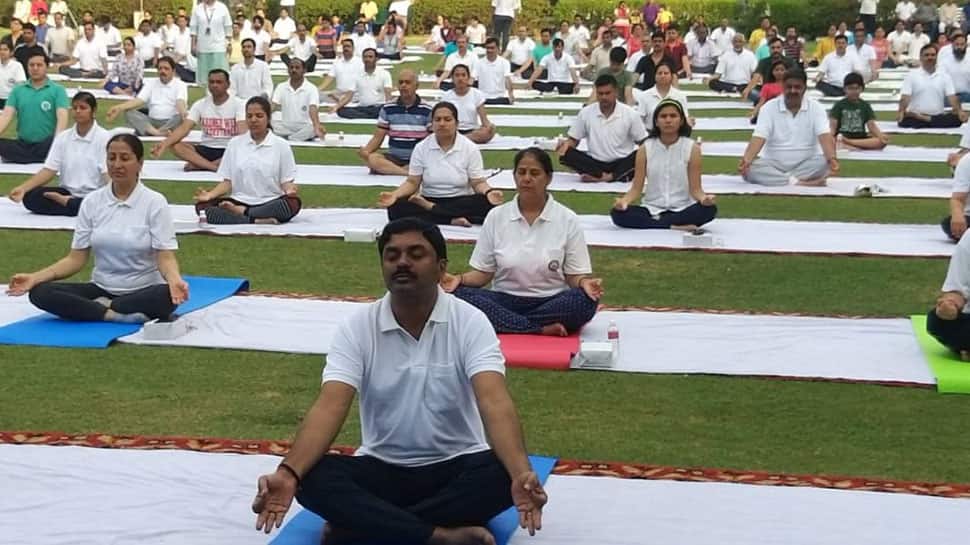 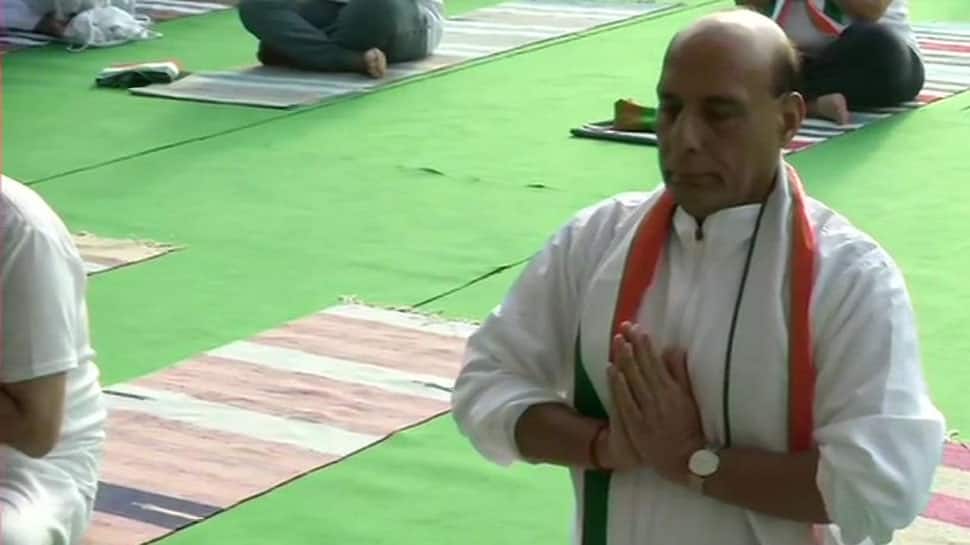 Knowledge of yoga is for the welfare of the whole world. On International Yoga Day, I express my gratitude to Prime Minister Narendra Modi that he has worked for giving yoga a global form: Amit Shah in Rohtak, Haryana

After practicing yoga, Prime Minister greets and interacts with the public gathered at the Prabhat Tara ground.

The Chinar Corps of the Indian Army took to Twitter saying that they celebrated the event. They tweeted, "Separated by thousands of Kms; Motivated by a single goal. Indian Army striving for healthy mind, body and soul. Against all odds celebrated Yoga Day 2019."

Sikkim: ITBP personnel perform yoga at an altitude of 19000 ft near OP Dorjila at minus 15 degrees Celsius temperature on #InternationalDayofYoga pic.twitter.com/QAdfZQRa9A

In today`s changing times, our focus must be on Wellness as well as protection from Illness. That is the power we get with Yoga, that is the feeling of Yoga and the ancient Indian philosophy: PM Modi

Now, I have to take the journey of modern yoga from the cities to the villages, to the poor and tribal`s house. I have to make yoga an integral part of the life of poor and tribal. Because it is poor who gets the most pain due to illness: PM Modi

I thank people across the world for joining Yoga Day celebrations. World over the first rays of the sun are being welcomed by dedicated yoga practitioners, it is a beautiful sight. I urge you all to embrace yoga and make it an integral part of your daily routine: PM Modi

We all know the importance of Yoga very well. It has always been an important part of our culture. But now we all have to take the practice of Yoga to another level: PM Modi addresses the gathering at the  Prabhat Tara ground

I extend my good wishes to all of you, in India and across the globe, on the occasion of International Yoga Day. Today, lakhs of people have gathered in different parts of the world to celebrate Yoga Day: PM Modi