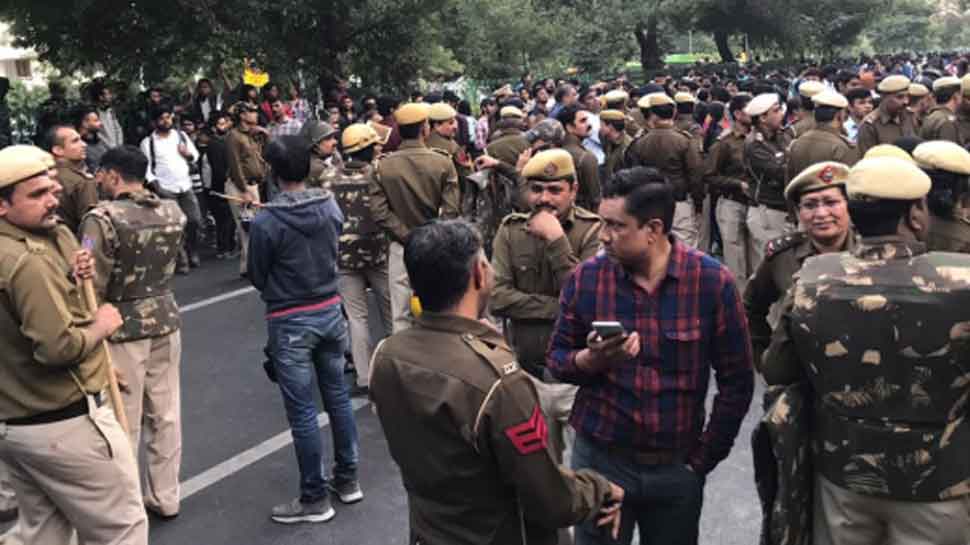 Demanding complete rollback of the hostel fee hike, the Jawaharlal Nehru University Students` Union (JNUSU) on Monday carried out a march to Parliament, as the winter session begins. "It`s a way to appeal to lawmakers to fight on their behalf inside the floor of the house," says JNUSU. As hundreds of students tried to march, barricades were put in place by Delhi Police and a massive deployment of personnel was reinforced around the JNU campus. Section 144 was imposed and prohibitory orders were also put in place.

With posters in hands and chanting anti-fee hike slogans, hundreds of students marched on the streets of the national capital. This even as the Education Secretary earlier addressed their concern by a partial roll back and on Monday announcing a new committee, which will open dialogue with the students. The JNU has been rocked with protests and vandalism allegedly by students, with graffiti painted on Vice Chancellor`s office and the Dean held hostage.

Here are the highlights of the day on JNU protest. Thanks for joining Zee News

Around 100 detained JNU students have been released by the Delhi police.

Five students are on their way to MHRD to discuss the fee hike issue, says JNUSU  president Aisee Ghosh

Entry and exit at Udyog Bhawan, Patel Chowk and Central Secretariat have been opened. Trains are now halting at all three stations. However, the services will still remains shut at Lok Kalyan Marg .

Protesting JNU students demand the release of detained students. Few of the students representative will meet the HRD ministry, till then they will hold sit-in protest in the Humayun tomb park.

Students Federation of India (SFI) CEC strongly condemns the police action against JNU students who were marching to the parliament against Hostel fee hike. SFI Central Secretariat member comrade Nitheesh Narayanan has been arrested by the police. JNU student union president Comrade Aishe Ghosh along with other office bearers has also been detained by the police. The SEC said, ''We stand in solidarity with our comrades and the JNU students who continue to march to the parliament, braving state terror.''

In the wake of JNU students protest the Aurobindo Marg, which leads from AIIMS to Safdarjung, has been closed from both sides. Along with  Africa Avenue Marg from Sarojini Nagar crossing to Chanakyapuri.

Subramanian Swamy made a statement criticising the JNU protest. He said, " They have not come here for studying, they know that situations are changing if they don't fight today what else will they do? He further said that the university should be closed for two years and the good students should be shifted to some other place. He accused protesting students of being mannerless and said that they should be put into jail.

Metro services at Lok Kalyan Marg also stopped due to the ongoing protest by JNU students.

JNU protest: Metro Services at three stations, including Udyog Bhawan, Patel Chowk and Central Secretariat, have been stopped temporarily as per Delhi police order. The entry and exit gates at these stations will remain closed.

Ministry of Human Resource has formed a committee under the chairmanship of former UGC chairman Dr. Virander Singh Chauhan to find an amicable solution between agitating students and JNU administration. This department will hold talks with JNU students and administration and bring out a solution to the problem.

Once again JNU students misbehaved with Zee News reporters during their march to Parliament. They used offensive language against the channel and its reporters.

Security beefed up outside Parliament House in the wake of protest carried out by JNU students.

Amid protests, senior Ghulam Nabi Azad supported the JNU students. He said, "What is the motive of the government behind the increase of 300 percent fee? HRD ministry committee has no meaning."

The students clashed with the police during their protests. They even pushed the personnel and behaved rudely with them. The students also used foul language against PM Narendra Modi and Union Home Minister Amit Shah.

The Ministry of Human Resource Development (HRD) has constituted a committee under the chairmanship of former UGC chairman VS Chauhan for the purpose of restoring peace in JNU. This committee will talk to the students and the JNU administration to find a solution.

Section 144 has been imposed at the gate of JNU on Baba Gangnath Marg. Police will try to stop the students inside the campus. Aruna Asaf Ali Marg and the east gate has been closed.

Delhi Police has deployed a force of nine companoes which includes Para Military Force. A total of 1,200 police personnel have been deployed, including Delhi Police.

A look at the security deployed outside JNU campus.

Traffic could be adversely affected or stopped on Nelson Mandela Road, Aruna Asaf Ali Road and Gangnath Marg due to the protests. Commuters have been advised to avoid these roads and use Mehrauli-Mahipalpur Road, Aurobindo Marg, Outer ring road and NH48.

The Central Reserve Police Force (CRPF) personnel has also been deployed outside JNU. The first barricade in near JNU gate and the second barricade is at a distance of 100-200 metre.

Delhi Police is trying its best not to let the protesting students get out of JNU. However, if they come out then they can be taken into custody by the police. Many buses have been arranged for that.