The polling that is spread over five phases, will conclude on December 20 and the result for the same will be announced on December 23.

Over 37 lakh electorate, who are eligible to exercise their franchise, will decide the electoral fortune of 189 candidates, including 15 women candidates in the first phase of Assembly elections, said Jharkhand Chief Electoral Officer (CEO) Vinay Kumar Choubey.

Security has been beefed up in these constituencies and adequate arrangements have been made at all polling booths.

The district administration in Jharkhand has tightened the security in two assembly constituencies Latehar and Manika, where a Naxal attack took place a few days ago. The administration has expressed confidence that they have made all the requisite arrangements and are sure that the voting will take place in a peaceful manner in these constituencies.

Tune In to Zee News for the latest updates on the Jharkhand Assembly election.

Electronic Voting Machines (EVMs) & VVPATs being packed at a polling booth in Lohardaga, as voting for the first phase of  Jharkhand Assembly Polls concludes.

People cast their votes at a polling booth in Lohardaga district of Jharkhand. 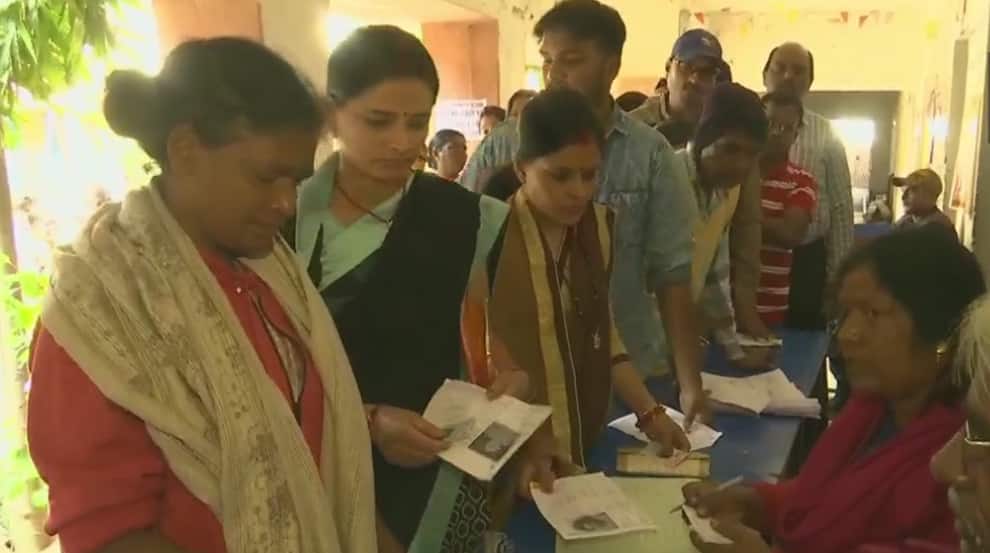 27.41 percent of voters turnout recorded till 11 am in the Jharkhand Assembly election.

Congress candidate KN Tripathi allegedly visited polling booth carrying his pistol. A clash broke out between BJP and Tripathi's supporters in Palamu. The EC has taken cognizance of the incident and ordered an investigation into the matter.

Voting percentage till 11 am:

PM Modi appeals people to exercise their right to vote for Jharkhand assembly election, tweets, "hase 1 of the Jharkhand elections is in progress. I urge those whose constituencies go to the polls today to vote in large numbers & enrich the festival of democracy."

Phase 1 of the Jharkhand elections is in progress. I urge those whose constituencies go to the polls today to vote in large numbers & enrich the festival of democracy.

I have made every possible effort for the development of Lohardaga. I want to reduce the problems of citizens: BJP candidate Sukhdev Bhagat

13.23 per cent voting was registered in the first two hours in Latehar assembly seat where the Left insurgents had killed four policemen just a few days ago.

Sanjay Jaiswal exudes confidence about Raghubar Das' victory in the election, says BJP will come back for the second consecutive term with full majority.

Voter turnout till 9 am:

11.02 percent voter turnout recorded in Jharkhand till 9 am.

Jharkhand: Voting continues at a polling booth in a Govt school in Lohardaga. Voting on 13 constituencies in the state for the first phase of elections is underway. #JharkhandAssemblyPolls

Jharkhand: Voting continues at a polling booth in a Govt school in Lohardaga. Voting on 13 constituencies in the state for the first phase of elections is underway. #JharkhandAssemblyPolls pic.twitter.com/IiD3rIR50M

Bharatiya Janata Party president and Union Home Minister Amit Shah urges people of Jharkhand to exercise their right to vote for the assembly election and choose a full majority government in the state.

Jharkhand: Voting underway at polling booth number 472 in Chatra. Voting on 13 constituencies in the state for the first phase of elections will be held today. #JharkhandAssemblyPolls pic.twitter.com/RpBAy4EKAX

Visual: First phase of polling for 13 seats begins in Jharkhand

First phase of polling for 13 seats begins in Jharkhand

Polling began at 7 am and will conclude at 3 pm today.

The opposition alliance of the JMM, Congress and RJD is contesting in four, six and three constituencies, respectively.

The BJP is contesting in 12 seats in the first phase, while it is supporting Independent Vinod Singh from Hussainabad.

By dialling 1950, voters will be able to register complaints on poll-related issues, EC officials said.

Voting will take place across 3,906 polling stations, out of which 989 will have webcasting facilities, an Election Commission release said.