The 13-month-old coalition government in Karnataka slumped into crisis following the resignation of several Congress and JD(S) MLAs from the membership of the House. 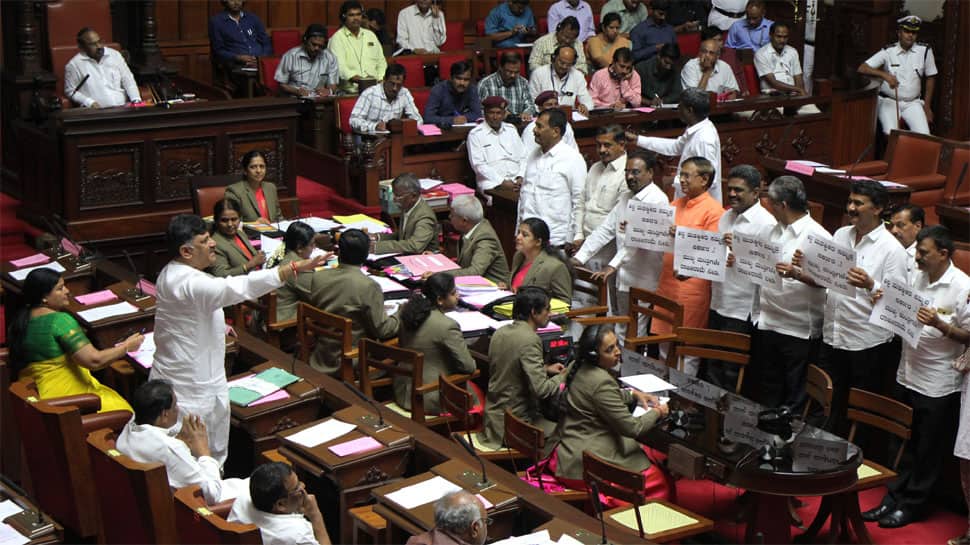 NEW DELHI: The Supreme Court Wednesday asked the Karnakata Speaker to decide on the resignations of rebel MLAs. The floor test is also unlikely in Karnataka on Thursday. "Karnataka MLAs not compelled to participate in the trust vote tomorrow," said the top court, adding that the Karnataka Speaker cannot be forced to accept the resignations within a time frame.

The top court had reserved its order on the pleas seeking direction for Speaker KR Ramesh Kumar to accept their resignations.

Fifteen MLAs from the ruling JD(S)-Congress alliance moved the court seeking direction for the Speaker to accept their resignation from the Legislative Assembly. Following this, counter petitions were filed by the Karnataka Chief Minister and the Assembly Speaker.

The 13-month-old coalition government in Karnataka slumped into crisis following the resignation of several Congress and JD(S) MLAs from the membership of the House. The resignation of all dissenting MLAs from Congress and JDS have not been accepted yet by the Speaker but if they are, the tally of Congress-JDS in the Karnataka Assembly will come down to 100. The BJP has 105 MLAs and also has the support of two Independents.

"This landmark judgement has given strength to democratic process. Some BJP friends are trying to misguide that whip is not valid but the party can issue a whip and take necessary action as per anti-defection law," Congress DK Shivakumar on SC verdict.

"We honour the Supreme Court`s verdict. We all are together. We stand by our decision. There is no question of going to the Assembly," a rebel MLA said on behalf of the dissidents who have been camping in Mumbai.

"SC in its final judgement will have to create timelines for Speakers to decide a matter be it Assembly or Parliament. If required we'll look at need for amending the act so that Speakers can't go by their own whims and fancies," said BJP's GVL Narasimha Rao.

"The Supreme Court has said that the matter will be fully thrashed out at a later date," said Mukul Rohatgi.

Karnataka floor test will now be held on Thursday.

"There is anarchy in the state because of HD Kumaraswamy, he should resign immediately after this verdict and not wait for the trust vote," says BJP's Jagadish Shettar on SC's verdict on Karnataka rebel MLAs plea.

"It's a landmark judgement from the SC. I welcome it. I will take a decision that in no way will go contrary to the Constitution, the Court and the Lokpal," says Karnataka Speaker KR Ramesh Kumar.

BS Yeddyurappa says: "Kumaraswamy has lost his mandate. Kumara has lost his confident majority. He must resign. He has lost the trust motion. I welcome SC's order. SC deciding the power of speaker will set a new trend in Parliamentary democracy."

On the issue of MLAs resignation, the SC gave liberty to Speaker to decide on the resignation of 15 MLAs within the time he chooses. The top court, however, has not clarified out what the Speaker should do with the disqualification pleas.

Earlier, the SC had directed the Speaker not to decide either on the resignation or disqualification pertaining to 10 out of 15 MLAs.

Supreme Court in its order says, "the Karnataka Speaker cannot be forced to take a decision within a time frame."

Top court allows the 15 rebel MLAs the choice not to participate in the trust vote proceedings on July 18. The Court said they shall not be compelled to sit in the House during the proceedings.

"We are waiting for Supreme Court's decision, the MLAs who have resigned will not be affected. Tomorrow CM is going to move the confidence motion, he will lose the mandate, let us see what will happen," says BS Yeddyurappa, former Karnataka CM and BJP leader.

BJP state president BS Yeddyurappa was seen engrossed in a game of cricket with BJP MLAs at Ramada resort in Bengaluru on Tuesday. In the evening, Yeddyurappa also listened to `Bhajans` (devotional songs) along with his colleagues. Many MLAs were seen singing bhajan "Raghupati raghav raja ram".

"It is the motive which is important. Eleven people are hunting in a pack. They flew to Mumbai when they could have met the Speaker," said Karnataka rebel MLAs hearing in Supreme Court: Dr Rajeev Dhawan, senior lawyer appearing for Karnataka Chief Minister.

Mukul Rohatgi, representing 10 rebel MLAs says, The Speaker can't hold the resignation for so many days. The rule states it has to be decided soon. This is an attempt to scuttle their resignations. The Speaker is trying to make a decision on both the issues-resignation and disqualification-at the same time."

The hearings of the rebel MLAs, the Speaker and Karnataka Chief Minister HD Kumaraswamy was concluded in the SC on Tuesday before a three-judge bench headed by Chief Justice Ranjan Gogoi. The other two judges in the bench are Justices Deepak Gupta and Aniruddha Bose. Advocate Mukul Rohatgi represented the 15 rebel MLAs and urged the SC to continue with its interim order directing the Speaker to maintain status quo on resignations and disqualification of the rebel MLAs. He also urged the top court to exempt the rebel MLAs from appearing on the basis of the whips issued by their respective parties when they go to the Assembly during no-confidence motion.

Kumaraswamy's advocate Rajeev Dhavan told the SC that it had no jurisdiction to pass the two interim orders asking Assembly Speaker to decide on the resignation of 15 rebel MLAs and also to maintain the status quo on their resignations and disqualification. Dhavan argued that the SC cannot force the Assembly Speaker to take a decision in this matter in a time bound manner. "When resignation process is not in order, court cannot direct Speaker to decide by 6PM," Dhavan told the bench. Kumaraswamy's counsel launched a scathing attack on the rebel MLAs and accused them of conniving to destabilise the Congress-JDS coalition government in the state.