Ghatlodia Assembly Election 2022 LIVE: Ghatlodia is one of the key assembly constituencies in Gujarat in the 182-member Gujarat Assembly. The Ghatlodia constituency in Ahmedabad district went to polls in the second phase of Gujarat elections on December 5. Incumbent Gujarat Chief Minister Bhupendra Patel is contesting from the Ghatlodia Assembly seat. He won the seat in the 2017 Assembly elections by a huge margin of 1.17 lakh votes defeating Shashikant Patel. This was one of the 99 seats that were won by the BJP in 2017.

Exit polls have predicted a massive win for the BJP in Gujarat, which is set to see a seventh term in the state. According to the Zee News exit poll results BJP is set to win a record number of seats (110-125) out of 182 seats. On the other hand, Congress may win 45-60 seats, AAP 1-5 seats, and Others may bag 0-4 seats. 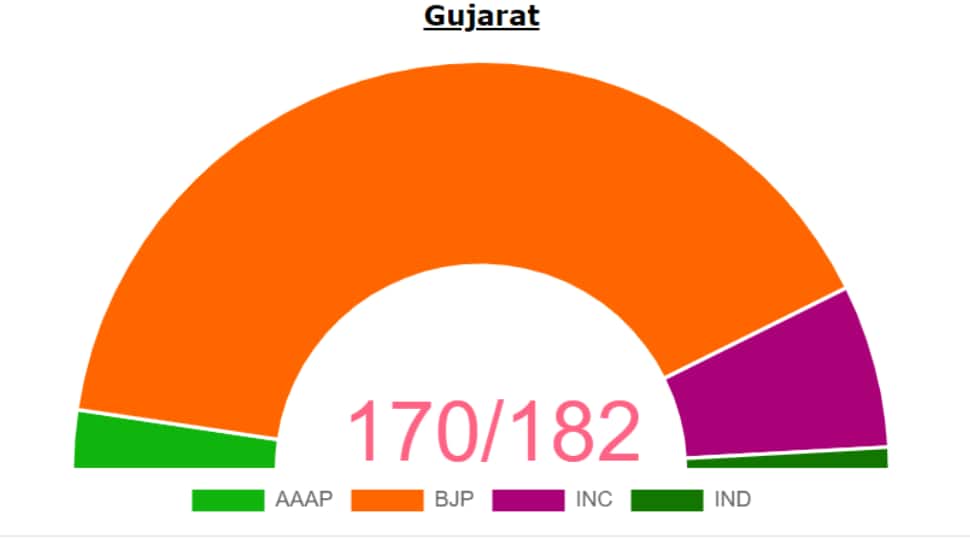 #GujaratElections2022 | Gujarat CM Bhupendra Patel leading with a total of 23,713 votes in his constituency Ghatlodia.

CM Bhupendra Patel won the seat in the 2017 Assembly elections by a huge margin of 1.17 lakh votes defeating Shashikant Patel. This was one of the 99 seats that were won by the BJP in 2017.

BJP will break records. It will get the maximum number of seats &the highest voting percentage. All our candidates will be ahead of their rival candidates by a huge margin. BJP will have a huge victory: Guj Min & BJP candidate from Surat West, Purnesh Modi#GujaratElectionResult pic.twitter.com/XrQgjLfg6c

The Chief Electoral Officer P. Bharathi said a total of 3,16,06,968 votes will be counted.

While BJP has trusted CM Bhupendra Patel to run from Ghatlodia seat, Congress has given ticket to veteran party leader Amee Yagnik and AAP has fielded Vijay Patel from the seat.

The counting for the Gujarat Assembly Elections 2022 is scheduled to begin at 8 AM.