Parliament updates: Nations which don't learn from their mistakes don't have a bright future, says Shah

The Jammu and Kashmir Reservation (Amendment) Bill which was cleared by Lok Sabha on Friday, allows people living along the International Border to get the benefit of reservation in jobs, promotion, and admission in professional courses. 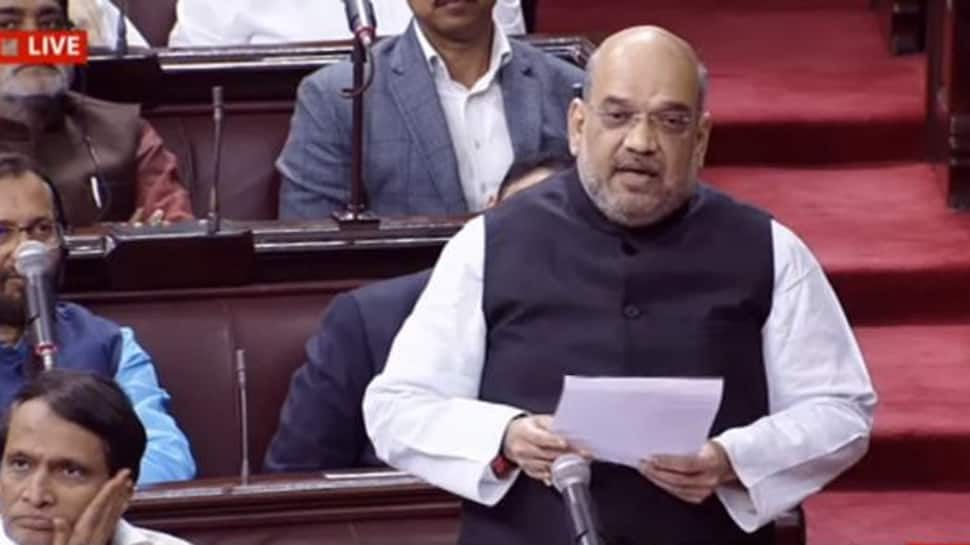 Home Minister Amit Shah on Monday tabled the Jammu and Kashmir Reservation (Amendment) Bill in Rajya Sabha. The Bill allows people living along the International Border in Jammu and Kashmir to get the benefit of reservation in jobs, promotion, and admission in professional courses at par with those living along the Actual Line of Control (ALoC). The bill was cleared in Lok Sabha on Friday.

Due to continuous cross-border tensions, persons living along the IB suffer from socio-economic and educational backwardness. Shelling from across the border often compels residents to move to safer places, which adversely impacts their education as schools and colleges remain closed for long periods.

The BJP-led government at the Centre has withdrawn security of more than 900 people including that of separatists, says Amit Shah in Rajya Sabha

Congress leader Ghulam Nabi Azad and RJD leader Manoj Jha said that the central govt wants to spread misinformation against Nehru among the Indian public. This is wrong. This is not our intention and never will be. But, the nations which don't learn from their mistakes in history don't have a bright future: Amit Shah in Rajya Sabha

On forming an alliance government with PDP in Jammu and Kashmir, Amit Shah said, “We came together for Kashmir and we separated for Kashmir.”

Democracy is in danger in West Bengal, Union Home Minister tells TMC MP Derek O'Brien. The government is committed to implementing NRC and will move ahead with this plan.

On Article 356, Home Minister Amit Shah accuses Congress of misusing the law and said: "They were the first one to use Article 356 in Kerala and they used in 93 times during their tenure."

The decision to hold Assembly elections in Jammu and Kashmir lies with Election Commission and BJP has nothing to do with it, says Amit Shah. He added that the security forces need more time to hold peaceful election in the state.

Schools are being shutdown in Kashmir and children are not getting education, saying there is no toilet or electricity in the state. If this was the Insaniyat that you (opposition) talked about?: Amit Shah in Rajya Sabha

The government won't spare 'tukde tukde' gand and they will get the response as the government wants, says Amit Shah in Rajya Sabha.

The BJP-led government won't spare those who want to divide India. The government is committed to work for the welfare of Kashmiris and we are following Vajpayee’s policy of “Kashmiriyat Jamhooriyat Insaniyat”.

We brought development to Jammu and Kashmir under President's Rule, says Amit Shah in Rajya Sabha

Sufism targeted in Jammu and Kashmir but no one raised voice against it, says Amit Shah in Rajya Sabha

All parties know Jammu and Kashmir is ours: Amit Shah

All parties know Jammu and Kashmir is ours: Amit Shah

Ghulam Nabi Azad said that Jawaharlal Nehru can be blamed for a number of things. But it was because of Nehru that Kashmir is still an integral part of India.

Leader of Opposition Ghulam Nabi Azad said that Jana Sangh founder Shyama Prakash Mukherjee was arrested in Jammu and Kashmir because he didn't have the entry permit to visit the state, which was mandatory back then. He added that Mukherjee was not lodged in jail but was made to stay in a guest house. He passed away the next day due to cardiac arrest and Jawaharlal Nehru should not be held responsible for this.

AAP Rajya Sabha MP Sanjay Singh said that it's a waste of time to discuss who is the reason behind the current condition of Jammu and Kashmir. The President's Rule in Kashmir throughout the history is justified by the PDP's weak rule, he said.

Biju Janata Dal to also support the Jammu and Kashmir Reservation Bill, 2019 and extension of President's rule in J&K.

Samajwadi Party leader Ram Gopal Yadav said in Rajya Sabha that the party will support the extension of President's rule in Jammu & Kashmir by 6 months as proposed by Amit Shah earlier in the day.

Minister of State for Finance Anurag Thakur on Monday said that no bank has the power to appoint musclemen for recovery of loans, and recovery agents have to be appointed according to the prescribed norms. Replying to queries of members in the Lok Sabha during the Question Hour, Thakur said there is a process of police verification in the appointment of recovery agents and they have to clear a module prepared by the Indian Institute of Banking and Finance. He said the circular issued by the Reserve Bank of India advises banks to ensure that their contracts with recovery agents do not induce "adoption of uncivilised, unlawful and questionable behaviour in the recovery process".

Amit Shah: I propose that President Rule in Jammu and Kashmir, which ends on July 2, be extended for the next six months. Shah added that elections in the state will be held in a democratic, free and fair manner once the Election Commission announces the dates.

Amit Shah: I request the members of Rajya Sabha to pass the J&K Reservation Amendment Bill which will ensure a better life for the people living in areas along the International Border in Jammu and Kashmir.

IUML MP ET Mohammed Basheer, has given an Adjournment Motion Notice in Lok Sabha over the incident of mob lynching in Jharkhand. Prime Minister Narendra Modi had last week said in Lok Sabha that the lynching of a Muslim youth in Jharkhand, has pained him and the guilty must be severely punished. However, he had stressed that all incidents of violence in the country, whether in Jharkhand, West Bengal or Kerala, should be treated the same and law should take its course.

Amit Shah will also move the resolution that President Rule be in place in Jammu and Kashmir for the next six months. Lok Sabha on Friday given its nod to extend President's Rule in the state for another six months beginning July 3. Shah had asserted that assembly elections in the state will be held in a democratic, free and fair manner as soon as the Election Commission announces the dates. Replying to the statutory resolution seeking the extension of President's Rule in the state, and the amendment bill, Shah had said that the Modi government has 'zero tolerance' policy towards terrorism and its ideology is to ensure the protection of borders and make the country free of terrorism.

Ramesh Pokriyal will move that the Central Educational Institutions (Reservation in Teachers' Cadre) Bill, 2019 be taken into consideration. The Bill will provide for the reservation of posts in appointments by direct recruitment of persons belonging to the Scheduled Castes, the Scheduled Tribes, the socially and educationally backward classes and the economically weaker sections, to teachers' cadre in certain Central Educational Institutions established, maintained or aided by the Central Government, and for matters connected therewith or incidental.

Finance Minister Nirmala Sitharaman will on Monday make a statement regarding the status of implementation of the recommendations contained in the 58th Report of the Standing Committee on Finance on Demands for Grants (2018-19) pertaining to the Department of Revenue, Ministry of Finance.