There will be bloodbath, another Pulwama when Kashmir curfew is lifted: Imran Khan

Prime Minister Narendra Modi said it is important for the world to unite in the fight against terrorism in his address at the 74th session of the UN General Assembly (UNGA) on Friday.

New York: After PM Modi, Pakistan Prime Minister Imran Khan spoke at the 74th session of the UN General Assembly (UNGA) on Friday. Imran claimed that there were no terror groups in Pakistan, and alleged that India's accusations were incorrect.

Earlier, Prime Minister Narendra Modi said its impportant for the world to unite in the fight against terrorism in his address at the 74th session of the UN General Assembly (UNGA) on Friday. The PM said that terrorism was the greatest threat to humanity and the biggest global challenge.

Though the PM did not mention Pakistan but his speech focused firmly on terror. He said that lack of unanimity on the issue dents those very principles that are the basis for the creation of the UN. The speech also highlighted the reform agenda of his government, as the PM spoke at length about actions taken to tackle climate change, as well as health and cleanliness initiatives.

Following PM Modi's address, Pakistan Prime Minister Imran Khan will address the session after a gap of two speakers. In his earlier engagements, Imran Khan made it clear that he will "forcefully present the Kashmir issue" at the UN gathering.

PM Modi was the fourth speaker at UNGA after Mauritius President Paramasivum Pillay Vyapoory, Vice President of Indonesia, Muhammad Jusuf Kalla and Lesotho’s Prime Minister Thomas Motsoahae Thabane. This was the first address to the world leaders on the global platform of the UN, after winning a second term as Prime Minister with a thumping majority in the recently-concluded Lok Sabha elections 2019.

Here are the highlights of PM Modi, Imran Khan's address at UNGA:

After Pakistan Prime Minister Imran Khan criticised India's actions in Kashmir and presented its case about the entire escalation of hostility after the attack on CRPF convoy in Pulwama, India will use the right to reply in the United Nations General Assembly.

If the conventional war starts with a country which is seven times bigger than Pakistan, what will we do? I ask myself this a lot of times. But I say this, we will fight but think what happens when two nuclear countries fight: Pakistan PM Imran Khan at UNGA.

"There are millions of Muslims in India. PM Modi, do you know what they must be thinking. If there's a bloodbath, Muslims will become radicals. You are forcing Muslims into radicalisation. They will pick up arms," Imran Khan.

There will be a bloodbath when curfew in Kashmir is lifted: Imran Khan at UNGA.

Before any of this happens, the United Nations need to take responsibility. That is why UN was formed in 1945: Imran Khan.

India is forcing people into radicalisation. When people lose their hope to live, they become radicalised, says Imran Khan.

What will 1.3 billion Muslims think? If something happens, India will blame us again: Imran Khan.

India might come and bomb us again if another Pulwama happens: Imran Khan. What will Muslims living in India think? Won't they feel radicalised, says Imran Khan.

Imran Khan warns of another Pulwama-like attack in Jammu and Kashmir at UNGA session.

PM Modi's election campaign was also based on a lie. During 2019 Lok Sabha election, PM Modi campaigned saying "I have taught Pakistan a lesson" was a lie: Imran Khan.

When Pulwama attack happened, India immediately blamed us. We asked them for proof but they instead they sent their aircraft: Imran Khan.

India keeps accusing us but there are no militant groups in Pakistan: Imran Khan.

Imran Khan says that Islamophobia since 9/11 has grown at a pace which is alarming. "The human community lives together, there should be an understanding. But Islamophobia is dividing the world. Muslim women have been asked to take off their Hijab in other countries. A woman can take off her clothes in other countries but cannot put on Hijab. Why? Because certain leaders have equated Islam with terrorism. There is no radical Islam. There is only one Islam. What msg do they send to the world?"

There are no terror groups in Pakistan, India's accusations incorrect, says Imran Khan

A Kashmiri boy who was radicalised by Indian security forces blew himself up at an Indian Army envoy, but we had nothing to do with it, claims Imran Khan.

I have great following in India, great friends in India: Imran Khan.

70,000 Pakistanis died when the US waged a war against the perpetrators of 9/11, we had nothing to do with it: Imran Khan.

Why should tax havens be allowed at all? Sooner or later you're going to have a big crisis if the rich keeps getting richer and the poor get poorer, says Imran Khan.

When my party came in power, it was our resolution to fight against terrorism, says Imran Khan.

When my party came to power, we planted a billion trees but one country cannot do everything, says Imran Khan

Certain leaders equate Islam with terrorism, what message do they send: Imran Khan.

Some countries are not serious about climate change: Imran Khan adds at UNGA.

Pakistan is one of the top ten countries that are most adversely affected by climate change: Pak PM

There are some very difficult problems that the world must confront. Climate change is one of the biggest problems today: Imran Khan

Honoured to represent my country on a forum where we come together to discuss problems: Imran Khan.

PM Modi meets Indian community outside the General Assembly hall following his speech at the 74th session of UNGA.

India is one of the leading nations in the fight against climate change, though its contribution to greenhouse gas emissions was "very low'', says PM.

India's message to the world is peace and harmony; terrorism a threat to humanity, says PM Modi as he concludes his speech at UNGA.

If you look at the per capita contribution to global warming, India's contribution is very less as compared to other countries, says PM

There is a seriousness and anger in our voice to alert the world against terror. We believe that this is one of the biggest challenges of humanity and not just for one country but of the whole world: PM Modi.

The topics that India is raising, the new global forums that India has come forward to build, are the basis of global challenges, global themes and collective efforts to solve serious problems: PM Modi

Our motivation - Sabka Saath, Sabka Vikas, is everyone's faith. We are trying to keep 130 crore Indians at the centre, but the dreams for which these efforts are being made are of the whole world, of every country, of every society. The effort is ours, the results will be for the whole world: PM

Time has come to give fresh impetus and fresh direction to Multi-lateralism and United Nations, says PM Modi.

India has given 'buddha' and not 'Yudh' to the world: PM Modi. Working towards global friendship and global welfare: PM adds.

Terror is a great challenge before humanity: PM Modi says. The world needs to unite against terrorism, he adds.

In the next five years, we are going to build 1,25,000 km of roads. India is a great culture that is thousands of years old. It has encompassed universal dreams, our culture focuses on seeing divinity in every being. As as a result, public welfare is embedded in our cultural values, says PM.

In the largest democracy of the world, the highest number of people in the world voted, giving me and my government a stronger mandate than before. Due to this mandate, I am here today: PM Modi.

We are running a huge water conservation campaign. In 2022, when India celebrates 75 years of independence, we will build 2 crore homes for poor: PM.

In the last 5 years, the NDA government opened 37 crore new bank accounts for people below poverty line, and made Financil Inclusion a resounding success, says PM.

I am delighted to inform you all, that while I am addressing you, fight against single-use plastic is going on in India, says PM Modi.

It is a matter of pride for me to address the UNGA on behalf of India: PM Modi begins his speech.

Members of the Indian community gather outside United Nations Headquarters, ahead of PM Narendra Modi's address at the 74th United Nations General Assembly.

Thomas Motsoahae Thabane, Prime Minister of Kingdom of Lesotho is addressing UNGA. He is the third speaker to address the session. PM Modi will be addressing the session next.

Balochistan protesters stage a plane protest near UN building in New York. They are demanding the UN's help to end human rights abuses in Balochistan. 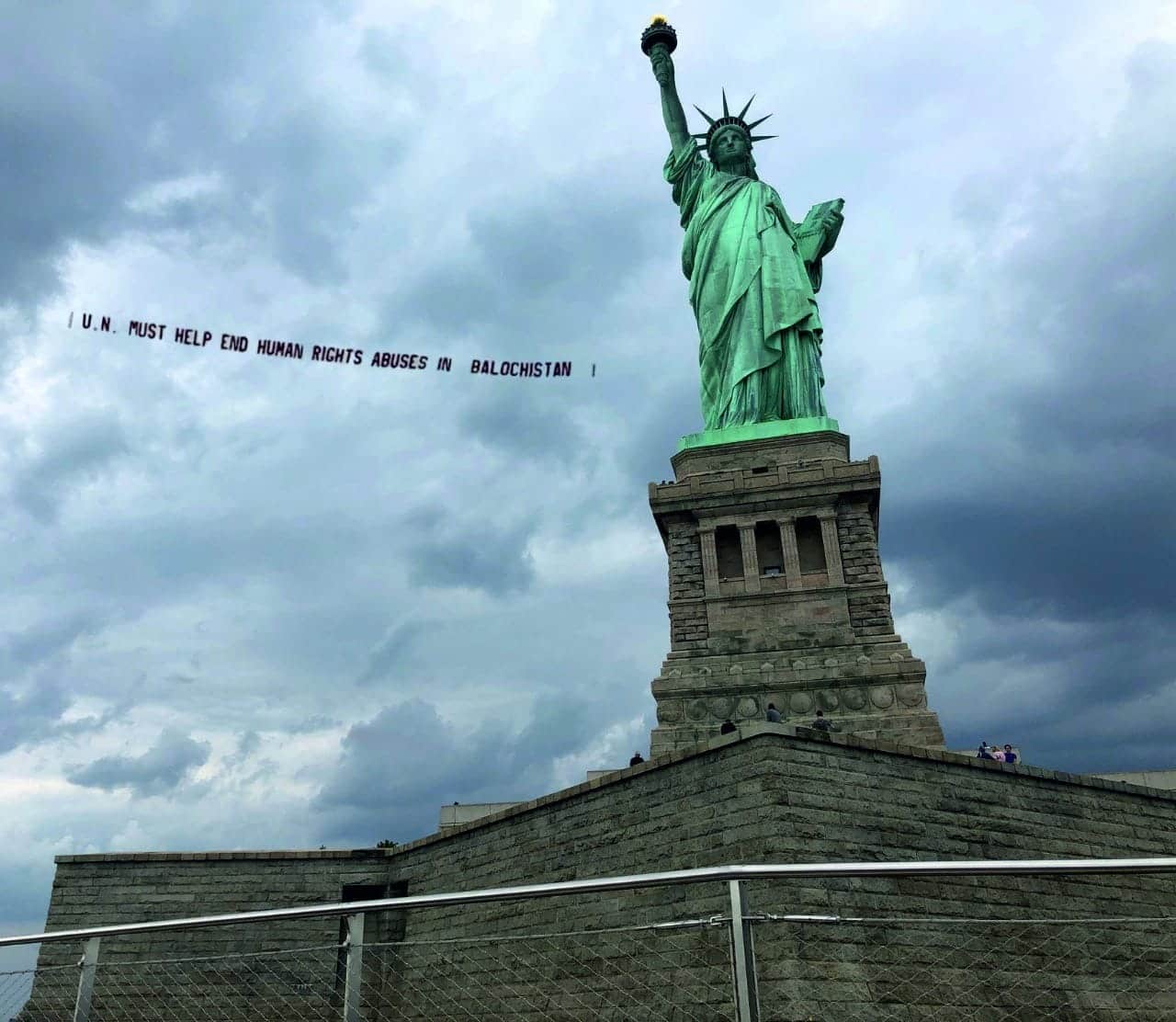 Minutes before his address at the United Nations General Assembly, Prime Minister Narendra Modi's Office tweeted about his upcoming speech.

All set for the @UN General Assembly session!

The speech of PM @narendramodi begins shortly. Do watch it LIVE. pic.twitter.com/63fWbgG0b7