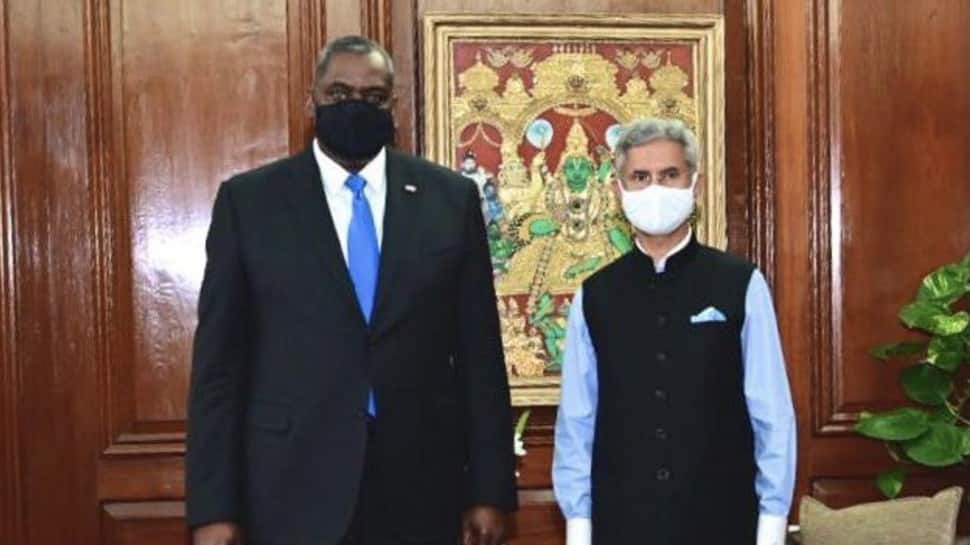 New Delhi: PM Narendra Modi addressed a rally on Saturday (March 20) in West Bengal’s Kharagpur and Assam’s Chabua. The rallies were scheduled at 11:15 am and 2:30 pm respectively. The prime minister is going to hold the public rallies as a part of BJP’s campaign in the two poll-bound states.

Meanwhile, Congress leader Rahul Gandhi is scheduled to rally in poll-bound Assam on Saturday (March 20). The Congress leader will be holding two public meetings, one at Bapuji Stadium in Jorhat and the other at Gohpur Higher Secondary School Ground, Biswanath district.

Thank you for tuning to Zee News for the latest updates.

EAM agreed and emphasised that a strong relationship between the two democracies was not only important for both countries but for the rest of the world: ANI reported on the meeting between EAM Dr S Jaishankar & US Defence Secretary Lloyd J. Austin III.

Welcomed US Defence Secretary Lloyd J. Austin III at Ministry of External Affairs. A wide-ranging conversation on the global strategic situation. Look forward to working with him on enhancing our Strategic Partnership: EAM Dr S Jaishankar

Former AIADMK MLA Muthuramalingam joins DMK party in presence of party president MK Stalin Muthuramalingam did not get a ticket from AIADMK to contest in the upcoming elections in Tamil Nadu.

Japan's Meteorological Agency has lifted a tsunami advisory that was issued after an earthquake hit northeastern Japan early Saturday evening: Japanese Media, according to ANI

NDA govt has built solid foundation for Assam's development in the last 5 years. Congress and its allies want to cash in on this & loot Assam. Hence, you must be cautious & remember that Congress would put anyone at stake for their benefit: PM Narendra Modi in Chabua, Assam.

Four people died and one was critically injured in an explosion in Maharashtra at a chemical factory. the factory was situated in an industrial area in Ratnagiri district.

Maharashtra: Four people died and one critically injured in an explosion at a chemical factory in an industrial area in Ratnagiri district today. pic.twitter.com/0xw7WbcqLB

Mansukh Hiren death case taken over by NIA. Formal order from MHA issued to NIA regarding this. This case was earlier being investigated by Maharashtra ATS: Official Sources

Hosabale, 66, hails from the Shimoga district of Karnataka. He joined RSS in 1968. He was arrested during the emergency period.

India has scaled a significant peak in its battle against COVID-19 pandemic. The total vaccination coverage has surpassed 4 crores. 4,20,63,392 vaccine doses have been administered through 6,86,469 sessions, as per the provisional report till 7 am today, revealed Ministry of Health.

I would like to express my deepest condolences for the tragic accident that killed an Indian Air Force pilot (Ashish Gupta), earlier this week, says US Defense Secretary Lloyd J. Austin III.

Our relationship is a stronghold of free & open Indo-Pacific region. PM Modi stated India stands for freedom of navigation & freedom of overflight, unimpeded lawful commerce in adherence to international law. This reaffirms our shared vision for regional security, says US Defence Secretary.

PM Modi: Didi has wasted 10 very crucial years of the youth of Bengal. Her party is the school of cruelty, and its syllabus is Tolabaji, cut-money, syndicate and is a training centre for harassing and troubling people.

PM Modi in Kharagpur, West Bengal: You have seen destruction by Congress and the Left. The TMC ruined your dreams. In the last 70 years, you gave opportunities to everyone but give us 5 years, we will free Bengal from the 70 years of destruction.

PM Narendra Modi refers to WhatsApp, Instagram global outage and attacks Mamata Banerjee-led government. "WhatsApp, Instagram was down for 50 minutes, but there's no development in West Bengal from the past 50 years," says PM Modi.

Here in Bengal, development, belief, dreams have been down for 50-55 years, and thus, I understand your impatience to bring in a change!#ModirSatheiAsolPoriborton pic.twitter.com/RSLkSWi2yr

PM Narendra Modi: Agriculture, irrigation and cold storage facilities in this region will be made better. We'll also improve the healthcare facilities and rural roads. We'll ensure clean drinking water to every household in the region.

PM Modi: I am proud that my party has leaders like Dilip Ghosh.

PM Modi: Your excitement reflects that Bengal will form a BJP govt after the Vidhan Sabha elections. A BJP govt is essential for a prosperous future of Bengal. 130 karyakartas from Bengal have laid down their lives in this struggle.

We will bring development in West Bengal in 5 years: PM Narendra Modi

The US Secretary, who is on a three-day official visit to India, called on PM Narendra Modi yesterday and also met NSA Ajit Doval. pic.twitter.com/FrrjBID2YA

CDS General Bipin Rawat and the three Services Chiefs are also present at the meeting. pic.twitter.com/zZ7coe9g4Z

US Secretary of Defence Lloyd James Austin III accorded the Guard of Honour at Vigyan Bhawan in New Delhi.

India reported a massive surge of 40,953 COVID-19 infections in the last 24 hours. Country recorded the highest single-day spike in the last four months on Saturday (March 20) as per the government data.

Fire had broken out in New Delhi-Lucknow Shatabdi Express at 6:45 am. The affected coach was detached. All passengers are safe. Train departed at 8:20 am, said Indian Railways authorities. (ANI)

BJP is likely to release a manifesto for the upcoming Tamil Nadu and West Bengal Assembly elections today.

PM Narendra Modi is set to address a rally on Saturday (March 20) in West Bengal’s Kharagpur and Assam’s Chabua. The rallies are scheduled to be held at 11:15 am and 2:30 pm respectively. The prime minister is going to hold the public rallies as a part of BJP’s campaign in the two poll-bound states.