The Speaker also warned the House MPs to conduct themselves in a responsible manner while particip[ating in a debate or reacting to some one's statement. 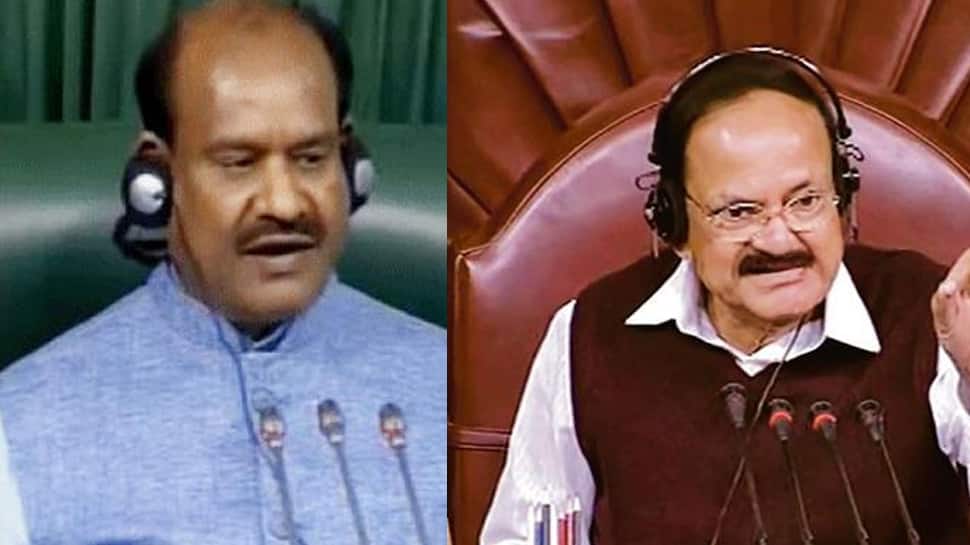 New Delhi: Upset with continuous disruption of proceedings by the parliamentarians and forced adjournments, Lok Sabha Speaker Om Birla and Rajya chairperson M Venkaiah Naidu on Thursday gave a valuable piece of advice to the lawmakers from the Opposition benches as well as the Treasury benches to conduct themselves responsibly when the House is in session.

The advice from Speaker Om Birla came when the Minister of State for Home G Kishan Reddy urged him to adjourn the Lower House in view of alleged sexist and derogatory remarks made by Samajwadi Party member Azam Khan against BJP MP Rama Devi.

Rejecting his request, the Speaker asserted that there will be no forced adjournments in the lower house of Parliament.

The Speaker also warned the House MPs to conduct themselves in a responsible manner while particip[ating in a debate or reacting to some one's statement.

The Speaker, who is a BJP lawmaker from Rajasthan's Kota, warned the ruling side MPs not to take advantage of their majority in the Lower House in suppressing the voice of the opposition and, at the same time, warned the Opposition lawmakers not to stall proceedings inside the House and force adjournments.

The warning from the Speaker came after MoS Reddy said that the country had witnessed Azam Khan`s remarks and urged him to go inside (his chamber), scrutinise the record and then return to the House and listen to its members.

It may be recalled that during a debate on a bill to criminalise Triple Talaq on Thursday, BJP lawmaker Rama Devi, officiating as Speaker, had asked Azam Khan to address the Chair while making his point.

Shockingly, Samajwadi Party chief Akhilesh Yadav defended him and was even seen grinning when Azam Khan first made the outrageous comments.

Defending Khan, SP chief Akhilesh Yadav said there was no intention to malign the Chair, sparking protests by the BJP members.

He then made a remark about the conduct of BJP members to which the Speaker took objections and reminded Yadav that he had been a chief minister and should be mindful of words which were unparliamentary. He also asked the SP chief, a former chief minister of Uttar Pradesh, to apologise.

Yadav said the word he used was first used by the Treasury benches.

The Speaker asked him to point out the member who used the term and asked the SP leader to apologise.

During the ensuing melee, Khan said that he has spent a long time in politics and if he has used any unparliamentary language, he is ready to resign "immediately".

Earlier, when the bill to repeal obsolete laws was being introduced in the House the Speaker had agreed with Trinamool Congress MP Kalyan Banerjee that new laws should be brought to replace British-era laws."I agree with you. The House should try that the British era laws are made into laws in a new form," he said.

Meanwhile, a piece of similar advice came from Rajya Sabha chairperson M Venkaiah Naidu, who cautioned the Upper House lawmakers not to stall proceedings in the Upper House and waste taxpayers' money and while welcoming constructive criticism.

It may be recalled that the two Houses of the Parliament have witnessed fireworks over several issues including Donald Trump's Kashmir mediation claim, mob lynching and political crisis in Karnataka, which saw the Opposition attacking the government and demanding explanation from the ruling coalition.