BJP leader Devendra Fadnavis resigned as the chief minister of the state after admitting that he does not have majority in Maharashtra assembly. He stepped down after rebel NCP leader Ajit Pawar quit as the deputy CM, hours after the Supreme Court ordered a floor test in the state assembly.

The Maharashtra political drama came to an end on Tuesday (November 26) evening with the Shiv Sena-Nationalist Congress Party-Congress MLAs electing Uddhav Thackeray as the chief ministerial face of Maha Vikas Aghadi. The Shiv Sena supremo also staked his claim to form the government in Maharashtra before Governor Bhagat Singh Koshyari, who announced that the latter will be sworn in at 5 pm on Thursday (November 28) at Shivaji Park.

A few hours earlier, Bharatiya Janata Party (BJP) leader Devendra Fadnavis resigned as the chief minister of the state after admitting that he does not have majority in Maharashtra assembly. Fadnavis stepped down after rebel NCP leader Ajit Pawar quit as the deputy CM, more than three days after dramatically extending support to the BJP.

This development took place hours after the Supreme Court ordered a floor test in the state assembly.

Although there are speculations that Thackeray will have two deputy chief ministers, Congress leader Balasaheb Thorat said that it is not clear if the deputies from the allies or other ministers would be sworn in along with Thackeray on Thursday. 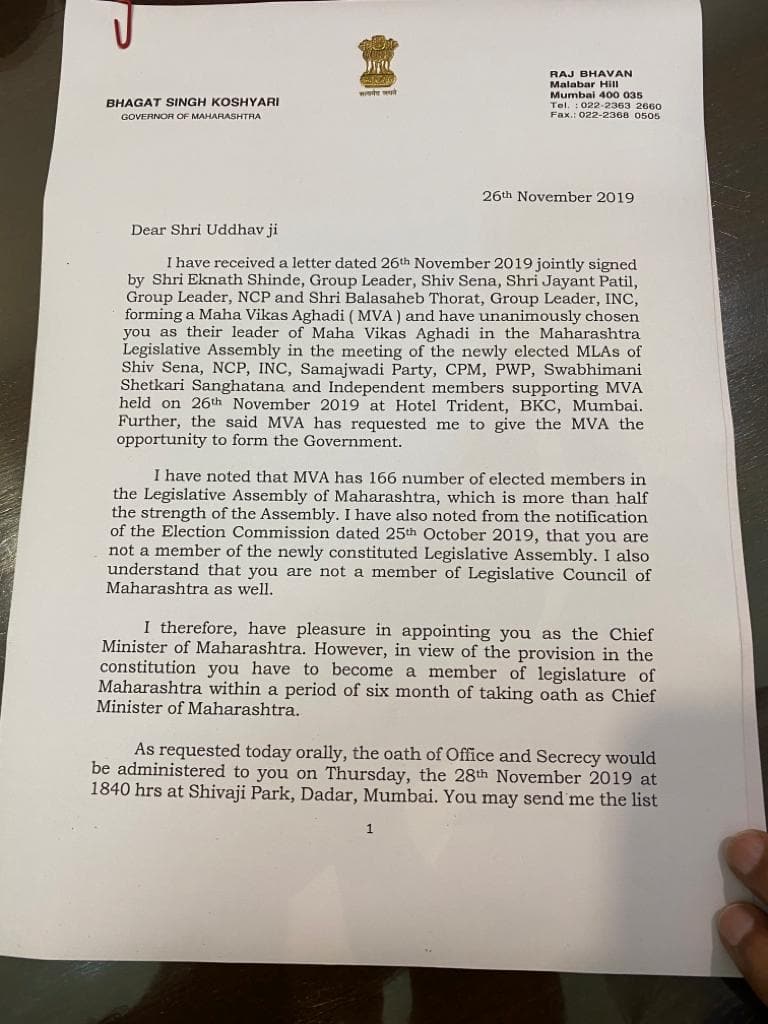 On the priority of the Maha Vikas Aghadi, Shiv Sena MP Abdul Sattar said, “Our priority will be to waive loans to farmers in the first cabinet meeting itself. Except a few people, rest of the Maharashtra is happy today. I should not be making comments on why Ajit Pawar joined hands with BJP. Sharad Pawar can comment on him.”

BJP leader Ashish Shelar, after attending a party MLAs’ meet in Mumbai, said that they will serve the people by sitting in the Opposition. “In coming days we will serve people, sitting in the opposition. We received information that 'Maha Vikas Aghadi' is going to stake claim to form government with Uddhav Thackeray as CM, we congratulate them,” he added.

Notably, the Shiv Sena-NCP-Congress combine had demonstrated a "show of strength" on Monday, claiming the support of 162 MLAs.