Shiv Sena chief Uddhav Bal Thackeray was sworn in as the Chief Minister of Maharashtra at a grand function organised at the Shivaji Park in Mumbai on Thursday. Governor BS Koshyari administered Uddhav Thackery the oath of office and secrecy at 6.40 pm. 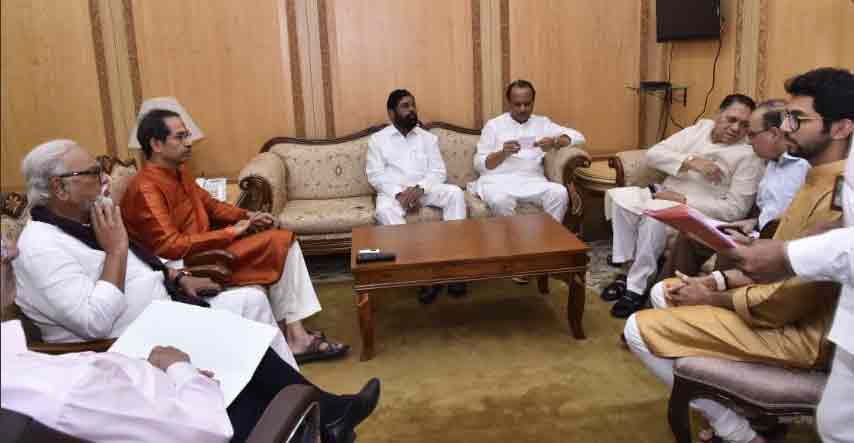 Mumbai: Shiv Sena chief Uddhav Bal Thackeray was sworn in as the Chief Minister of Maharashtra at a grand function organised at the Shivaji Park in Mumbai on Thursday. Governor BS Koshyari administered Uddhav Thackery the oath of office and secrecy at 6.40 pm.

Soon after completing the formalities, Thackeray stepped to the front of the stage and knelt down, touching the floor with his hands and head to express his gratitude to the people of Maharashtra for the honour bestowed on him.

Brief detail about the leaders who took oath today is given below:

1. Eknath Shinde: Shiv Sena MLA is known to be one of the closest leaders to the party chief Uddhav Thackeray. The legislative party leader of Shiv Sena, the 55-year-old is currently an MLA from Kopri-Pachpakhadi, which he has won continuously for the fourth time.

Shinde has been the cabinet minister of public health and family welfare in Maharashtra and was elected as Shiv Sena's legislative leader in October 2019 for the second consecutive term.

In 2014, he was elected as the Leader of the Opposition in the state and has served as the cabinet minister of public health and family welfare in Maharashtra.

Shinde was elected as Shiv Sena's legislative leader in October 2019 for the second consecutive term.

His son Dr. Shrikant Shinde is an MP from Kalyan constituency.

2. Subhash Desai: One of the close confidants of Uddhav Thackeray, 77-year-old Desai is currently an MLC. The senior-most member of the cabinet has also been a close aide of Sena founder, late Balasaheb Balasaheb Thackeray.

Desai represented Goregaon assembly constituency in 1990, 2004 and 2009. He took charge as the Cabinet Minister of Industries on December 5, 2014 in the Sena-BJP alliance government. He hails from a Maratha family.

3. Jayant Patil: 57-year-old NCP leader is known to be close to the party supremo Sharad Pawar. An MLA from Islampur constituency in Sangli district, Jayant Patil has the distinction of being the Finance Minister for 10 years in Maharashtra. He also has the record of presenting state budget 9 times in a row.

When he became Home Minister after the death of RR Patil, he started a police modernisation programme in the state laid the foundation of Force 1. He has been Chairman of several sugar cooperatives and is credited to have established the Institute of Education and Sugar Cooperative.

Son of renowned Maharashtra politician Rajaram 'Bapu' Patil, Jayant Patil, was appointed as the legislative leader of the party earlier this week.

4. Chhagan Bhujbal: 72-year NCP leader is currently an MLA from Yevla in Nashik district of Maharashtra. An OBC leader, Bhujbal comes from a humble background and is known to have been selling vegetables in Byculla in his early life.

Former Deputy Chief Minister Chhagan Bhujbal started his political career in Shiv Sena and rose to ranks in the party from a Corporator to a mayor and member of the legislative assembly. Irked over the elevation of party colleague Manohar Joshi as the leader of the opposition, Bhujbal broke away from Shiv Sena and joined the Congress.

Bhujbal was the leader of the opposition during the Shiv Sena-BJP government in Maharashtra. After the formation of the NCP, Bhujbal became the president of the state unit and when the NCP Congress alliance came to power, he was made the Deputy CM and Home Minister.

Owners of several educational institutions in Mumbai and Nashik, he is also an accused in the disproportionate assets case.

During the Fadnavis government, he was put behind bars for more than 3 years.

Known for maintaining a low profile, Thorat was first elected as an MLA from Sangamner in 1985 as an independent. In 1990, he contested Assembly poll on a Congress ticket and this is his eighth term as a legislator.

Balasaheb Thorat became a minister of state in 1999 and was promoted as a cabinet minister in 2004. He has held revenue, agriculture, water conservation and protocol portfolios in the past.

6. Nitin Raut: 62-year-old Congress leader is the national chairman of the party's Scheduled Caste department and is one of the working presidents of the party in Maharashtra.

Hailing from Nagpur, Raut, comes with past experience in government. He has held animal husbandry, employment guarantee and water conservation departments so far. Raut is a four-term MLA.